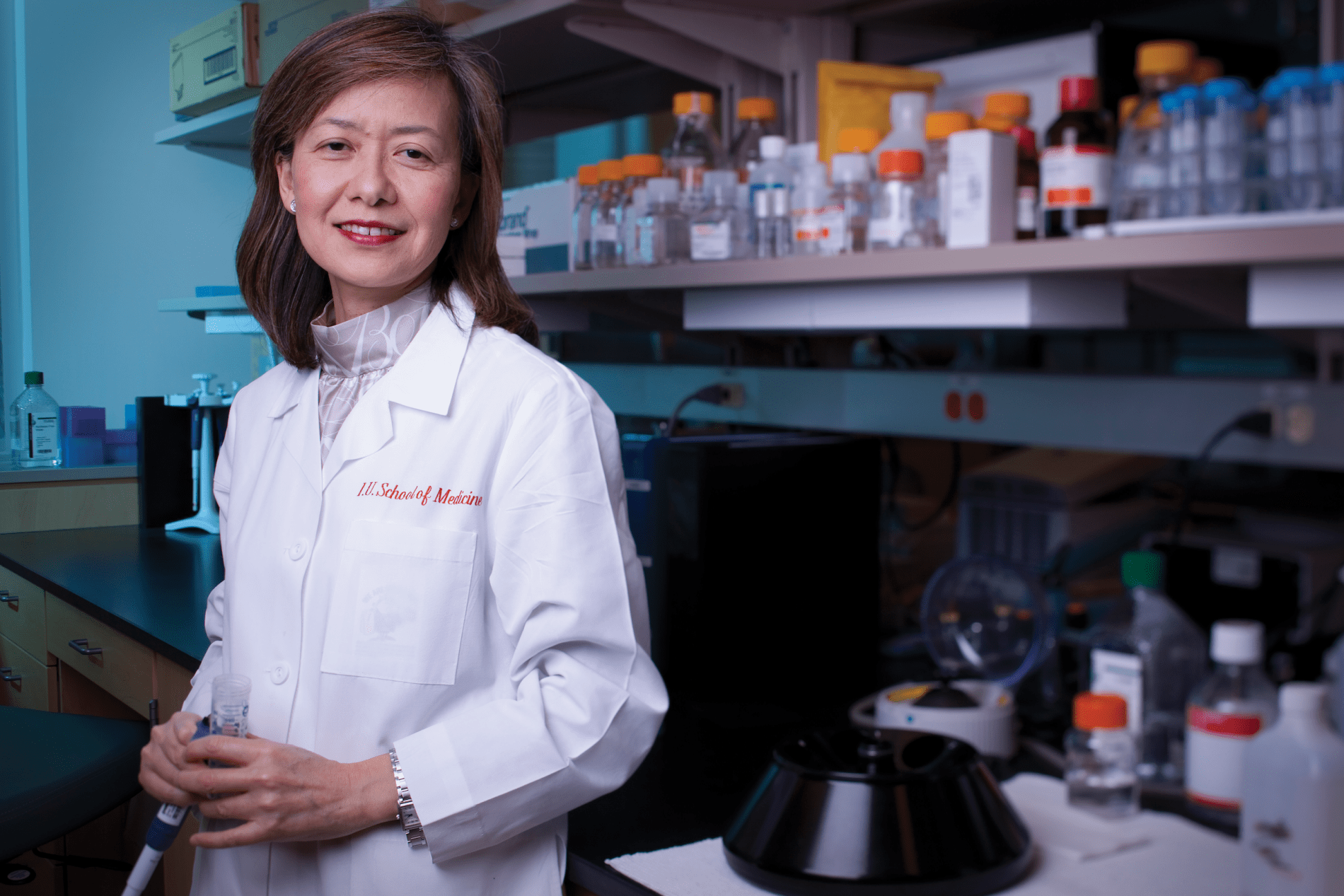 THE INNER ear is one of the most delicate structures in the human body.

The cochlea is the main organ responsible for hearing, and it is only about 4 millimeters across. It is so exquisitely sensitive that it is capable of sensing pressure changes as small as one billionth of an atmosphere, and it can be damaged by something as simple as loud noises or as complex as adverse drug reactions. In short, the inner ear is tiny, complicated, and vital.

Eri Hashino, PhD, can grow trays full of them.

While it may sound like a page out of a science fiction book, the breakthrough has the potential to transform the way drugs are tested and to allow researchers to more easily study the workings of the ear, including what happens when something goes wrong.

Dr. Hashino, a professor of otolaryngology-head & neck surgery, and her graduate student, Karl R. Koehler, set out to do something that had never been accomplished before: grow a functioning inner ear using mouse stem cells.

Dr. Hashino and her team also let the cells grow slowly, coaxing them through the normal developmental stages that a growing sensory cell in the inner ear would undergo. The results were promising; the cells organized themselves into something that looked like an inner ear, including the sound-sensing sensory hair cells. But did they work like one? “That these derived cells look like hair cells wasn’t enough. We had to see that these cells were functional,” says Dr. Hashino.

The sensory hair cells in the ear are called stereocilia, and humans use them for both hearing and balance. The hairs move in response to sound waves and send electrical signals to the brain through neurons. Our brains translate these signals into sounds. Says Dr. Hashino, “It’s the most critical function of sensory hair cells. It’s why we can hear sound.”

After testing, it was clear that the cells grown by Dr. Hashino had the same functionality as natural ones. The laboratory-grown cells were able to translate movement into electrical activity, sending out signals when they were stimulated the same way that the cells in a human ear would. The electrical signals even had some place to go. In the human body, the inner ear cells are connected to the brain through neurons that develop alongside the sensory cells in the womb. In Dr. Hashino’s experiment, those same neurons had developed from the stem cells to connect with the sensory cells.

“All structures necessary for hearing are there,” says Dr. Hashino, “and we can make them from just clumps of stem cells.”

This research has attracted plenty of attention, and the results have been published in Nature, one of the world’s premier science journals. The implications of Dr. Hashino’s discoveries aren’t limited to the inner ear, either. She is confident that other sensory organs, such as the olfactory cells found in the nose, can be grown from stem cells in the same way.

There are numerous potential uses for these labgrown inner ear cells, with one of the most promising being drug discovery. Scientists will now be able to test if a drug is helpful or toxic to the cells of the inner ear easily and ethically. This testing can be done relatively quickly, because it’s possible to make hundreds or even thousands of sample inner ears all at once. A 3D culture is also far more accessible than the tiny and delicate inner ear of a living creature, which allows scientists the opportunity to closely observe how the ear grows and works. Ultimately, Dr. Hashino’s work may be part of the foundation that helps scientists stop or even reverse hearing loss.

Dr. Hashino is the Ruth C. Holton Professor of Otology, and her work is partially funded through an endowed faculty chair established by the late Philip and Ruth Holton. She credits the funds as being instrumental to her research.

“I knew I was doing something really important as a researcher but at that time, I was having problems getting NIH funding,” she says. “So the chair provided invaluable funding for my study, enabling us to obtain all the data necessary for grant applications.”