Medical student Dana Mitchell thought she might be suffering from an uncommon autoimmune disorder—and set out to prove it. 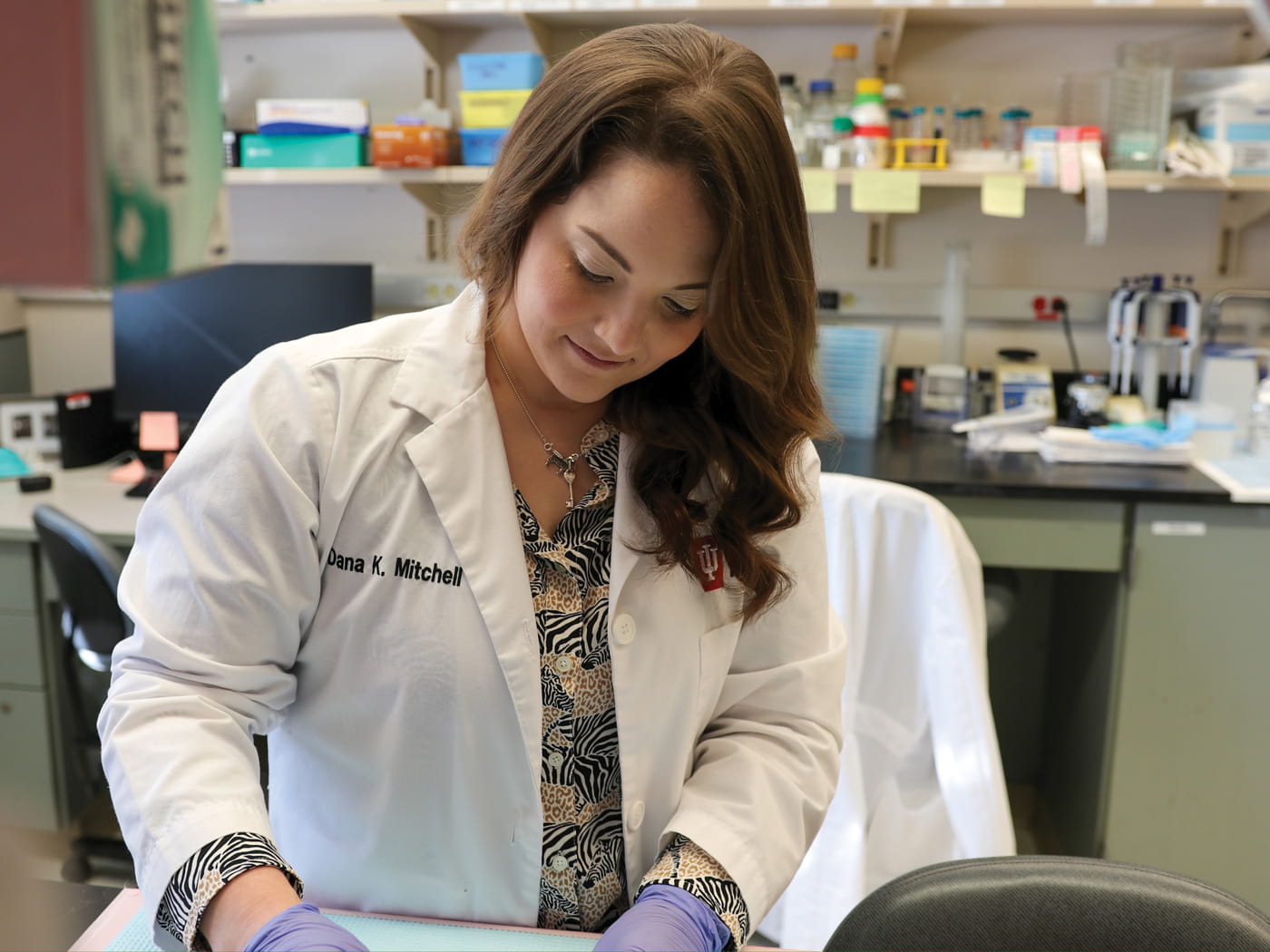 Dana Mitchell, a fourth-year medical student, assembled a team of specialists to help confirm she had autoimmune encephalitis.

IT BEGAN WITH a headache.

Dana Mitchell, a fourth-year student at Indiana University School of Medicine, never got headaches. She didn’t even own Tylenol. But these headaches were relentless. They kept her up at night, and when she did fall asleep, her rest was often interrupted by vivid, violent dreams.

The resulting fatigue might have been expected, but then came the pervasive mental fog. Dana was becoming forgetful and increasingly unable to translate her thoughts into words. She stumbled both in speech and physically. She had heart palpitations and elevated blood pressure. She fell in the shower.

“The best way I can describe it was neurological chaos,” Dana said. “I felt like my nervous system was on fire and super hyperactive—followed by periods of hardly being able to keep my eyes open, like a drugged feeling.”

It came on suddenly. Dana had just completed Step 2, a grueling, full-day exam required for medical licensing. And she did well. “Two weeks after that,” she said, “I couldn’t subtract four from my own age.”

DANA SOUGHT HELP from her mother, Indianapolis radiologist and 1988 IU School of Medicine graduate Jane Mitchell, MD. At first, Jane didn’t know what to make of the barrage of symptoms.

“One day, she would say her arm felt like it had a blood pressure cuff on it. The next day, she’d say her brain was revving like a car engine. Then her pulse was racing. I took her seriously—I just didn’t know what to do with it,” Jane said. “Every single day was a different symptom that didn’t seem to be connected. Now it makes sense when you know the main computer was not working well. Her brain was irritated.”

A CT scan, brain MRI, and other imaging tests left neuroradiologists convinced something wasn’t right, but there was nothing obvious like a tumor. Eric Beltz, MD, and Ben Kuzma, MD, both IU School of Medicine alumni, wondered if it could be encephalitis—inflammation of the brain which can be caused by infection or an autoimmune response.

Employing her medical research skills, Dana began poring over the literature. For example, medical students are taught when they hear hoofbeats, they look for horses—not zebras, representing an unlikely diagnostic possibility. But Dana began thinking she had a zebra—autoimmune encephalitis (AE).

Some of her physicians weren’t convinced, suggesting her symptomatic “hoofbeats” were indicative of conditions more common among medical students—stress-induced migraines and anxiety.

“Originally, everyone was thinking I was just stressed and had ‘Type A female medical student syndrome,’” Dana said. “Unfortunately, autoimmune encephalitis is not a well-recognized disease, especially with respect to patients early in the disease course and not requiring ICU-level care. Many patients are misdiagnosed as having psychiatric diseases. Being a medical student, I was not immune to misdiagnosis.”

Then she found an article by John Probasco, MD, co-director of the Johns Hopkins Encephalitis Center. It illustrated how PET/CT scans could be more valuable than other imaging tools for diagnosing autoimmune encephalitis. When Dana’s test came back, her brain scan looked nearly identical to the images in the article.

Her mother took her to Lennox Hill Hospital in New York. It was here neurologists developed expertise in autoimmune encephalitis following the 2009 AE diagnosis of New York Post reporter Susannah Cahalan, who wrote a memoir about her experience, “Brain on Fire.”

Dana’s brain was slowly shutting down, but parts of it remained aware, leaving her feeling trapped and unable to communicate. “It felt like I was screaming from the inside,” she said, “but no one could hear me.”

Dana determined the best approach was a combination drug therapy for multiple myeloma—one that depletes B lymphocytes and plasma cells. While these drugs have been used independently to treat patients with AE, Dana believed their combined use—at very specific time intervals—would be the key to long-term success.

Jane helped Dana assemble a team of oncologists and rheumatologists to review her findings. They also reached out to Paul Richardson, MD, a Harvard medical oncologist with Dana-Farber Cancer Institute, who led the development of one of the drugs. They all agreed with Dana’s proposed therapy.

Dana began treatments in April under the supervision of two Indianapolis physicians she would come to see as heroes—rheumatologist Steven Neucks, MD, and oncologist Sumeet Bhatia, MD.

“By the end of the first cycle, I was feeling the best I had felt in two years,” she said.

DANA’S ABILITY TO use her knowledge and research skills, her understanding of her condition, and her connections with researchers in the field were “spectacular,” said Paul Wallach, MD, executive associate dean for educational affairs and institutional improvement at IU School of Medicine.

“This really highlights how a physician or physician-in-training—through their understanding of the sciences underpinning medicine and the role of ongoing scientific inquiry—can make incredible connections in order to provide high-quality patient care—in Dana’s case for herself,” Wallach said.

Wade Clapp, MD, has mentored Dana in his faculty lab at IU School of Medicine, marveling at her “brilliant mind” and resilience.

“She developed her own ideas but also sought out multiple experts to validate what she was learning…and then worked thoughtfully with a world leader in autoimmune encephalitis to develop a treatment plan,” Clapp said. “I’ve never seen it before—I’ve never seen a medical student do that.”

Clapp has trained close to 20 students in the medical scientist program, including some who have become career investigators and leaders of academic health centers. Dana, he said, is among the best of that elite group.

Dana’s therapy ended in September. Aside from an occasional headache that subsides with Tylenol, she is symptom-free. She can do everything she did before the illness. “Needless to say,” she said, “I consider this a massive success.”

Dana knows she was uniquely positioned—as a medical student with research experience in neuroimmunology and the daughter of a physician—to solve her own medical mystery. In an AE support group during her treatment, she encountered a patient who saw 63 doctors over seven years—and another who spent five years in a psychiatric facility—before they were correctly diagnosed.

She hopes to publish her unique therapy in a respected journal so it will gain exposure within the medical community and lead to better care.

Dana is set to graduate from IU School of Medicine in December. She envisions one day leading a neuroimmunology program. But, for now, as a reminder of the sleuthing it takes to help patients with rare diseases, she wears a charm around her neck.