Coupled in the Fight Against Cancer 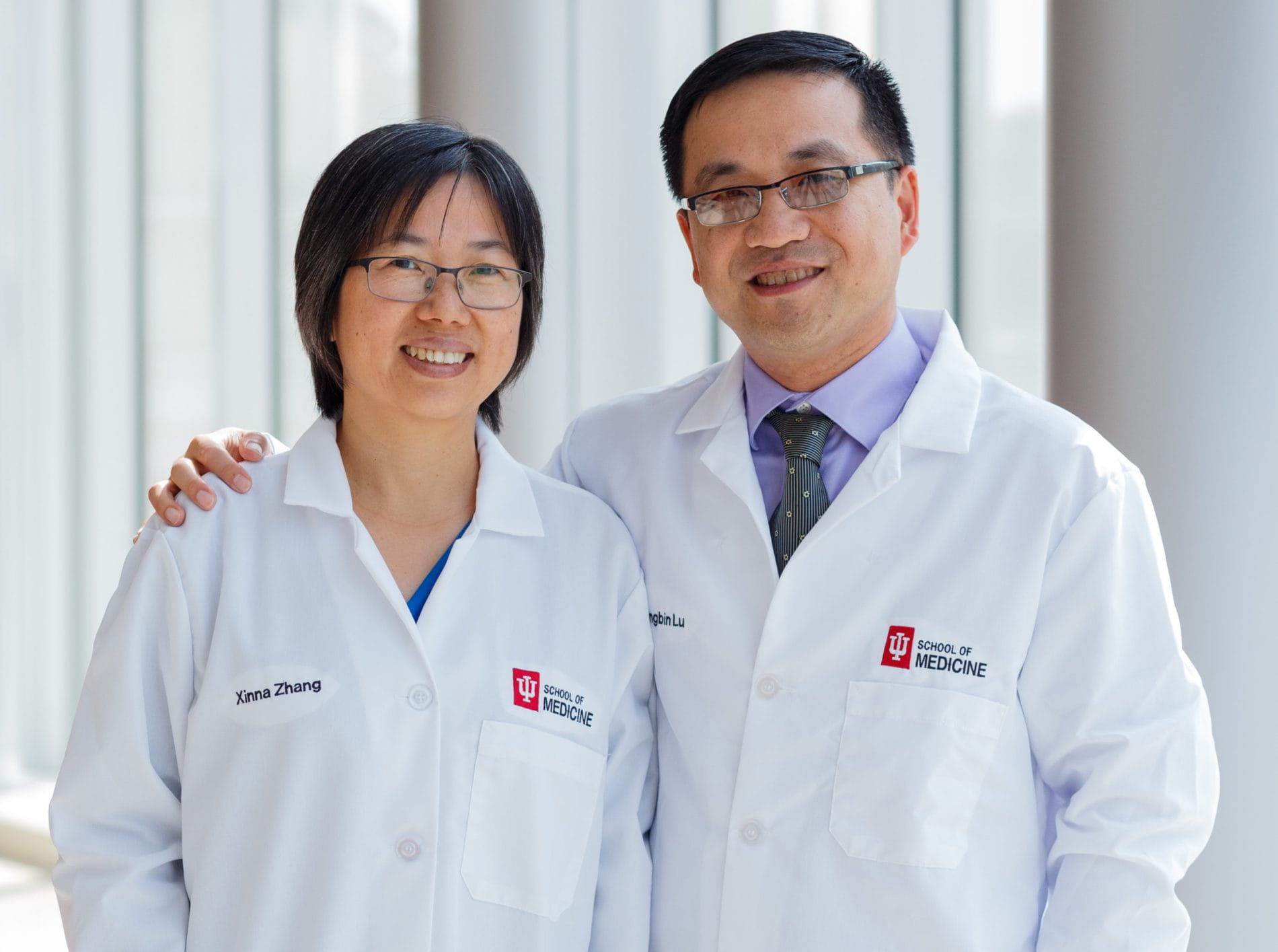 XIONGBIN LU, PhD, spends his days engrossed in research into the factors that lead normal breast tissue cells to turn into Triple Negative Breast Cancer—and engineering therapies to stop it.

Across the hall from Lu’s lab, Xinna Zhang, PhD, dives deeply into her the study of the biology of HER2-positive breast cancer, and what makes cells resistant to drug therapies.

But Lu and Zhang share more than their proximity to one another in the Vera Bradley Foundation Breast Cancer Research Center. They are husband and wife, and proud parents of their 13-year-old son, Alex.

Lu and Zhang are also key members of the breast cancer research team at the Vera Bradley Foundation Center for Breast Cancer Research, each with independent labs, each with a desire to understand the mysteries that remain about breast cancer, and to use what they learn to help prevent the disease or stop it in its tracks.

Lu’s work led him and a colleague from the University of Maryland to develop what they’ve described as a “nanobomb.” It’s a microscopic cancer-fighting tool, still being tested in animal trials, that plants itself inside breast cancer cells and then expands in size exponentially.

“The bomb gets much bigger—100 to 1,000 times bigger,” Lu said. “We put the cancer drugs in the nanoparticles so it only breaks up inside cancer cells. It kills them.”

Zhang is also developing a nanoparticle means of attack for HER2 breast cancers, one that delivers a drug that, in animal models, has shown it can slow or stop the growth of cancer cells.

Much of Zhang’s work involves helping the body more easily recognize cancer so the immune system can attack and kill it. “Cancer cells develop some means to conceal themselves so they won’t be recognized by the human immune system,” she said. “We are looking for the genes that involve immune evasion.”

Lu and Zhang, who are also members of the Indiana University Melvin and Bren Simon Cancer Center, met in Shanghai, appropriately enough, in a science lab. Both were biochemists in the same building, but separated by five floors. When Lu’s lab acquired a new piece of equipment, Zhang came down to ask about using it for her own research. Lu helped her out and things grew from there.

“It started from a work-based relationship and then developed into a real chemistry,” Lu said.

They were working at the M.D. Anderson Cancer Center in Texas when, in 2017, they decided to come to Indiana University, with Lu as the Vera Bradley Foundation Professor in Breast Cancer Innovation and Zhang as assistant professor of medical and molecular genetics.

While Midwest winters leave something to be desired, both say they’ve enjoyed the transition to more expansive roles at IU and to life in Indiana. Not surprisingly, perhaps, their son Alex excels in science. But he’s also something of a poet. And that’s just fine with his parents, who are content to leave the science talk behind at the lab.

But once they return each morning to the Vera Bradley Foundation Center, the pair share a common purpose. And they seem to inspire each other.

“I am always amazed by her motivation and enthusiasm in her studies,” Lu says, “which often encourages me to make novel discoveries and build up stronger team work between us and with other collaborators.”