Rooted on a limestone base and sheathed in glass, IU School of Medicine’s new academic health center will blend stability and humanity. 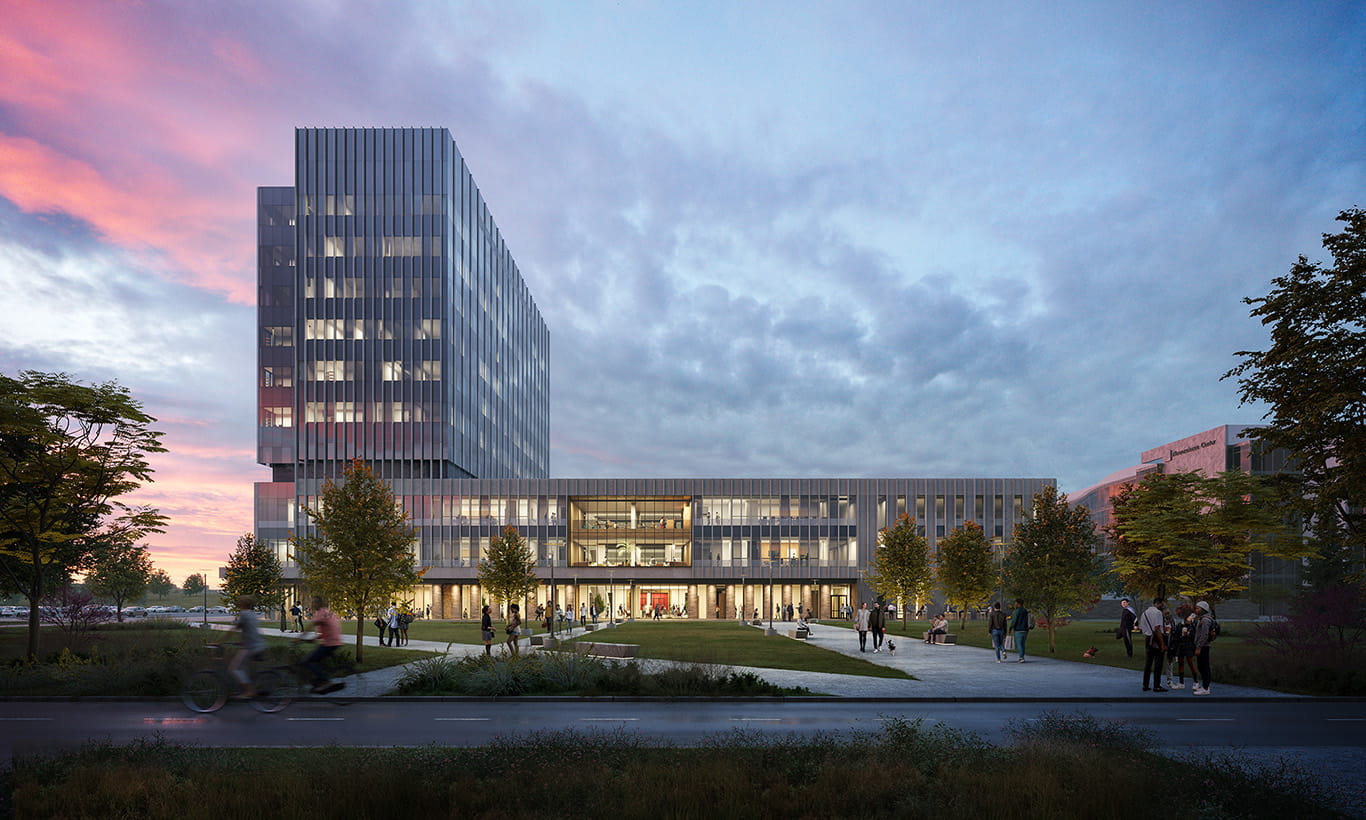 ARCHITECTURAL RENDERINGS of buildings yet to rise lend themselves to artistry. Curtains of glass windows reflect puffy clouds. Building profiles are backlit by purple and pink sunsets. Landscapes are softened by mature trees.

That kind of creativity is evident in recently unveiled plans for Indiana University School of Medicine’s next educational building. But artistry—and intentionality—is also evident in the design itself.

From its early days more than a century ago, the foundation of IU School of Medicine has been its duty to prepare physicians. And the first three floors of this new building—the broad base of the structure—will be the hub for medical education. In homage to IU’s architectural heritage, the base is reminiscent of the limestone buildings in Bloomington; its brick accents reminiscent of medical school buildings at IUPUI.

Looking to the future, an 8-story tower will rise from the academic base—making the building 11 stories in all—and feature versatile research space and offices for the researchers driving innovation. The tower will be sheathed in glass and designed with energy efficiency in mind—a modern structure for the 21st Century.

“We’re trying to root the building in IU history and the history of IU School of Medicine, while also looking forward—and ahead,” said Brett Hatchett, IU’s senior associate university architect. The tower lends an air of formality, Hatchett says, and speaks to the more fixed, rigid aspects of medicine. The interior is open and warm, evoking the humanity.
This design blending old and new, formality and warmth, was approved in February by the IU Board of Trustees. Groundbreaking is expected this fall. Completion of the largest project in IU School of Medicine’s 120-year history—the school’s new flagship—is expected in November 2024.

More important than aesthetics, of course, is how the school’s new center of gravity will prepare future healers and be a catalyst for new research discoveries.


Here’s a glimpse of how plans are taking shape.


A Base for Medical Education
The interior’s most striking feature is a naturally lit atrium that extends from the ground to the third floor—neatly defined by a staircase that will trace an elegant, unbroken upward line.

Beyond providing a bright, airy atmosphere, the openness is intended to connect students to the people around them—to make them feel part of a community, Hatchett said. Limiting the space to three floors—and designing it so students will want to use the staircase—contributes to connectivity. It’s not bad exercise either.

The atrium’s ground floor is intended to be a gathering space for mingling and large events. It will be flanked by classrooms of various sizes, student support spaces, two large, tiered lecture halls and a café. Levels 2 and 3 will feature smaller classrooms, a surgical skills center, simulation spaces, and the staples of any medical school—a library, practice exam rooms, and an extensive, modern anatomy lab.

Design principal Jerry Johnson, with the global architecture firm Perkins & Will, said these learning communities will be—during a student’s stay in medical school—much like their home, a place where lifelong friendships form and students draw support from others.

The communities will be clustered in threes, creating a slightly larger support network nearby—much like a neighborhood. All of it will be oriented around the atrium—the town square.

The geography—along with student support staff offices nearby—aims to ensure that students facing one of the most challenging phases of their career will have the backing they need. “Learning communities are really the heart of the building,” Hatchett said. “They are the center.”


The Tower: A Citadel for Innovation
Springing from the academic base, the eight-story research and office tower will bring the building’s total height to 11 stories. Widest on the north and south sides, the tower was designed to harmonize with the hospital across the street, which is expected to have three similarly oriented towers.

“The goal has always been not to be a twin with the hospital but a cousin,” Hatchett said.

The tower will contain offices for faculty and mechanical spaces to keep it humming. But three floors will be devoted exclusively to future research and research support. This will prove vital for departments in need of room to grow, such as the neurosciences and cancer, where research discoveries by IU School of Medicine faculty and trainees will lead to the next medical breakthroughs.

In addition to labs, the tower will feature areas where researchers can come together in collaborative spaces to share data and cultivate ideas. It will hold research cores where unique, state-of-the art equipment can be shared easily.


The Location
With its height and proximity to Interstate 65, the new building will give the School of Medicine a visibility like it’s never before enjoyed—a centerpiece for the school, Johnson said.

It will cozy up to Goodman Hall and the Neuroscience Research Building to the north, with the neuroscience building connected to the new building by an underground tunnel.

To the east, across a substantial green space and Senate Avenue, will be the mammoth new IU Health hospital, its proximity facilitating student clinical rotations, access to mentors and other opportunities. Their juxtaposition will also serve as a tangible symbol of the cooperation between the medical school and the hospital. Together, they will comprise the heart of a revitalized midtown medical district.