As the son of a surgeon, David Nahrwold knew his future lay in medicine. Two mentors at Indiana University School of Medicine helped launch his career – and set him on a course to become a leader in his own right. 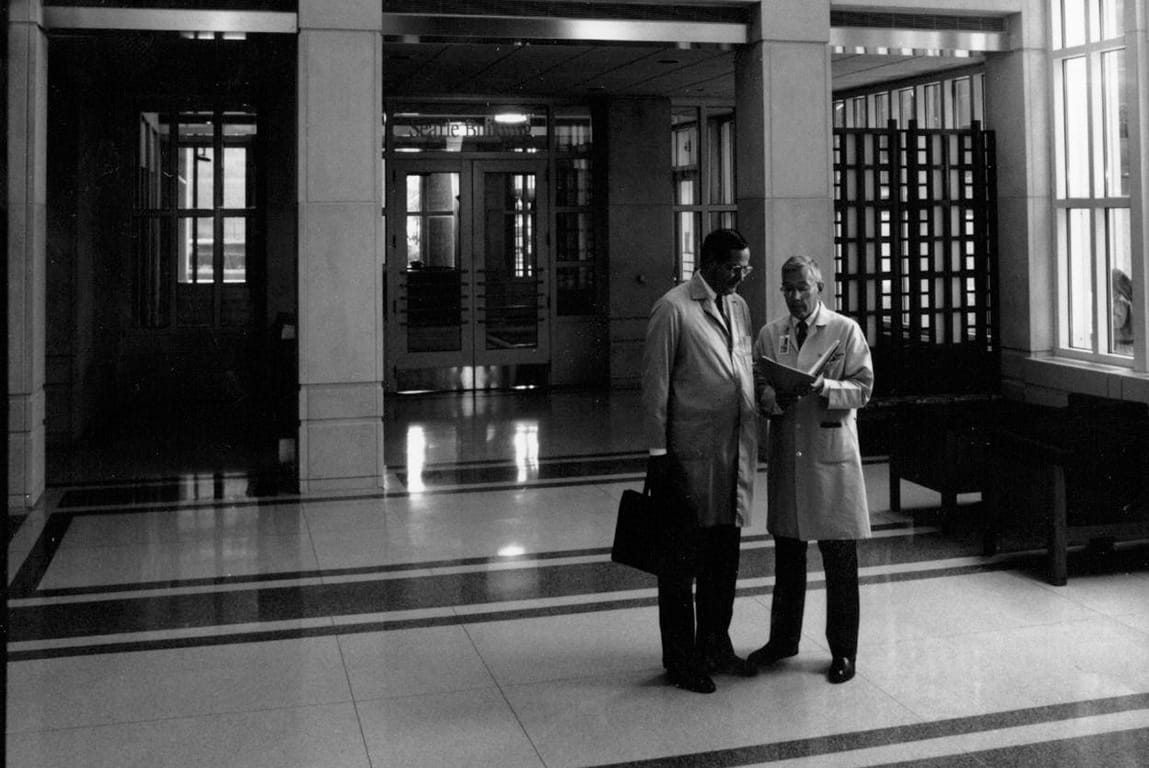 IN APRIL 1954, David Nahrwold, then a freshman at Washington University in St. Louis, sat across from his academic advisor—“an English professor with long hair down to his shoulders”—and had a frank conversation about his likelihood of getting into medical school. The advisor did not seem impressed by his smattering of As and Bs.

“He evidently thought I could do a lot better than I was doing,” Nahrwold says. “He said I probably wouldn’t get into med school at Wash U but I could probably get into a diploma mill.” Deflated, Nahrwold consulted with his father, a general surgeon in his hometown of Fort Wayne, Indiana, who urged him to seek a second opinion from the dean of Indiana University School of Medicine.

Nahrwold, 18, picked up the phone and called the office of John D. Van Nuys, MD. Dean Van Nuys, he was told, would meet with him, but he only had time on Easter Sunday. So a few days later, while home visiting family for the holiday, Nahrwold boarded a bus to Indianapolis from Fort Wayne. When he arrived on campus, Van Nuys was waiting outside the medical school building and escorted him into his office.

“He said, ‘I would advise you to get out of that school and transfer to IU,’ ” Nahrwold says. “He said, ‘You work hard and things will probably work out.’ ”

Nahrwold heeded the advice, and in the fall of 1954 transferred to IU Bloomington. It was a critical move that would influence the trajectory of his career. Two years later he was admitted to Indiana University School of Medicine and subsequently trained to be a surgeon under Harris B Shumacker, MD, the widely respected chair of surgery at IU.

Nahrwold went on to become one of the founding surgeons at Penn State’s newly established medical school in the 1970s and later built and led one of the nation’s preeminent departments of surgery at Northwestern University. He is the recipient of numerous national awards, and in 2016 was recognized by the IU School of Medicine Alumni Association for his extraordinary contributions to the field of medicine with the Distinguished Alumni Award.

But no matter how far he climbed up the ranks of academic medicine, he never forgot how Van Nuys took time out of his hectic schedule to meet with a lowly college freshman all those years ago. “It was a good lesson,” he says. “I remembered that a lot through the years. I never avoided meeting with a medical student or resident—ever—even if it was something I didn’t think they needed to talk to me about.”

Nahrwold recalls his first-grade teacher asking him what he wanted to be when he grew up. “I said a doctor, and I never really thought seriously of anything else,” he says.

The choice was no doubt influenced by his father. The elder Nahrwold frequently took his son on rounds with him, and when David was old enough to drive, he would chauffeur his dad to local hospitals and even to patients’ homes.

“His patients were sort of part and parcel of our family life,” Nahrwold says. “When the telephone rang, you always answered it on the first ring. We were all programmed to say, ‘This is Dr. Nahrwold’s residence.’ My father was always on call. Our family worked around his practice. I was acutely aware of how highly regarded he was by patients. That was important to me. He had a very good reputation.”

During medical school, Nahrwold found himself increasingly drawn to surgery, not only because of his father, but because of Shumacker, who was the school’s third chairman of surgery and a giant in the field. After Nahrwold’s own father died of pancreatic cancer early on in medical school, Shumacker became a guiding force in his life.

Nahrwold still smiles thinking about Shumacker’s larger-than-life personality, and how the Mississippi native would awe students and residents alike with stories about the famous physicians he had trained with at Johns Hopkins. But he also impressed those he trained with his whole-hearted commitment to patients. “He was passionate about taking care of patients,” Nahrwold says. “He would take rounds seven days a week. He would come in at night, and by that time he was a famous guy.”

Nahrwold, who graduated from medical school in 1960, applied and was accepted to complete both his surgical internship and residency at IU. The department was small. In addition to Shumacker, there were only a handful of surgeons on faculty, including Harold King, MD, and J. Stanley Battersby, MD, and just two residents per year. It was an exhilarating time to be in the operating room. Surgeons were now performing complex surgeries such as heart valve replacements and pneumonectomies, and Nahrwold had a front-row seat for it all.

By the end of his residency, Nahrwold had determined to follow in his mentor’s footsteps and become an academic surgeon. He was particularly interested in gastrointestinal physiology and sought to add research experience to his CV. Shumacker volunteered to call colleagues around the country to find the best placement for him.

After residency, Nahrwold and his wife, Carolyn, packed up their two young children and headed to Los Angeles so he could begin a one-year fellowship in the laboratory of Morton Grossman, MD, PhD, then chairman of physiology at UCLA.

Nahrwold might have stayed longer in Los Angeles, but it was 1966, and Vietnam called.
He was shipped overseas and served as a U.S. Army surgeon in Vietnam for a year before being assigned to a base in Missouri. When his service was up, he joined the IU faculty at Shumacker’s invitation. But he would not remain for long.

Less than two years after moving back to Indianapolis, he received a call from his good friend John Waldhausen, MD, who was a few years ahead of him in residency. “We used to be on call together at night and talk about, ‘If you could start a whole new medical school, a new residency, how would you do it?’ ” Nahrwold says.

Waldhausen was being recruited as the first chair of surgery for the new Penn State College of Medicine in Hershey, Pennsylvania. This, he told Nahrwold, was their chance to build the program they always dreamed of. On top of that, Shumacker had recently stepped down as chair at Indiana University.

So Nahrwold and his family departed for Hershey, then a one-stoplight town, where he became the inaugural chief of general surgery. Initially, Nahrwold was one of only 17 physicians on faculty, meaning he had a role in everything from recruiting to building a residency program to getting the emergency room ready to open. And he was only 35. “I had a ball there,” he says.

His career continued to advance at a rapid clip. He was named vice chair of the Department of Surgery and associate provost and dean for health affairs at Penn State, and in 1982 was recruited to chair surgery at the Feinberg School of Medicine at Northwestern University. Nahrwold held a variety of leadership and administrative roles at Northwestern until he retired and assumed emeritus status in 1999.

Today, Northwestern’s Department of Surgery is widely considered one of the top programs in the country, and that is in no small part because of Nahrwold’s influence. When he arrived, there were only three full-time surgeons on faculty. By the time he left, the number had ballooned to 60. But perhaps more than anything, he elevated the stature of the residency program by working to attract some of the nation’s best medical school graduates and ensuring each was exceptionally prepared for his or her career.

Peter Angelos, MD, PhD, recalls how he arrived at Northwestern in 1989 as a surgical resident while he was still working on a PhD in ethics. His ultimate goal was to pursue a career that blended both fields, but he didn’t think it would be feasible to finish his dissertation while working the demanding schedule of a resident. Nahrwold insisted he continue with his PhD, and paid him the salary of a research resident for a year so he could earn his degree.

Today, thanks to encouragement from Nahrwold, Angelos is associate director of the MacLean Center for Clinical Medical Ethics and chief of endocrine surgery at the University of Chicago. “He is really for me the one guy who made it possible,” Angelos says. “He was an ideal mentor for so many of us because he seemed to give advice or make recommendations for us based on what was best for our careers, more so than what might be good for him or the program.”

While he spent the majority of his career at just two institutions, Nahrwold’s impact can be felt throughout the surgical and medical worlds. He held memberships with and served on the boards of numerous national organizations, including the Joint Commission, which accredits U.S. hospitals. He was also a driving force behind the establishment of core competencies on which graduate medical education programs are assessed for accreditation. In these roles, he made important contributions to patient safety and reinforced the critical need for ongoing education and quality improvement activities for physicians from all specialties.

“David is a giant in the field,” says Gary Dunnington, MD, chair of the IU Department of Surgery who has long admired and respected Nahrwold. “He’s held almost every major position. He’s not just an academic surgeon. He’s a surgical researcher, educator and leader. In all these areas he’s been at the top. To have a graduate of IU climb the ranks of academic medicine to become the epitome of academic surgical leadership in the United States and the world, that’s a distinct honor.”

It has been 63 years since Nahrwold first set foot on the campus of Indiana University School of Medicine and met with Dean Van Nuys to seek guidance. In hindsight, Van Nuys’ assessment that “things will probably work out” for the young man from Fort Wayne was not only true, but an understatement.

By all standards, Nahrwold has made his alma mater proud.

Last May, he returned to the city where his career began to receive the school’s Distinguished Alumni Award. It was a moving and emotional experience for Nahrwold and his family. “It completed my career,” he says of the award. “I just feel there’s nothing more that I need to have. It was very meaningful for me.”