Michael Weiss has developed a more stable form of insulin and aims to transform how people with diabetes worldwide receive treatment. 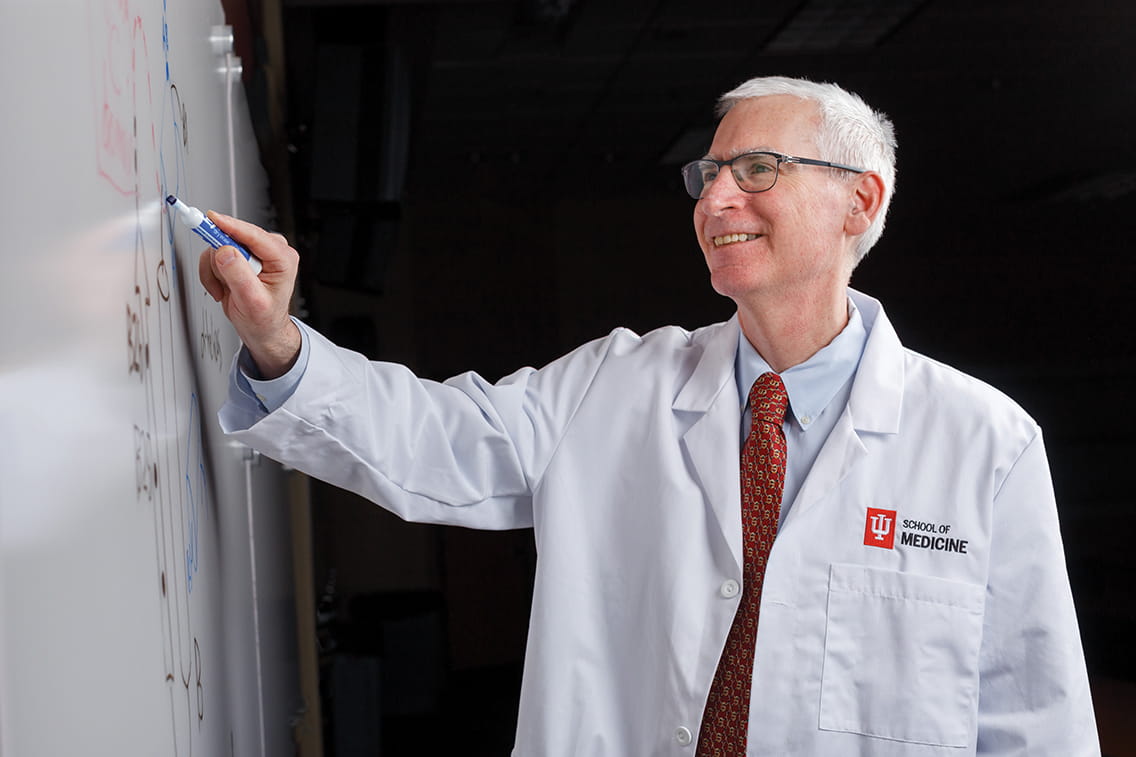 MICHAEL A. WEISS, MD, PhD, MBA, had just finished his second year of medical school at Harvard University when he accepted a prestigious fellowship that allowed him to spend a year traveling and studying abroad. His parents didn’t think he should go. Finish your studies first, they urged. But Weiss didn’t heed their advice. It’s a good thing. His year abroad piqued his interest in insulin and spurred a research career that may ultimately change the way millions of people living with diabetes manage their disease.

“All this just really couldn’t be planned,” said Weiss, who was recruited to Indiana University School of Medicine from Case Western Reserve University in December 2017 to serve as chair of the Department of Biochemistry and Molecular Biology.

While a traveling fellow, Weiss set up home base at the University of Oxford in England and worked in a laboratory in the Department of Biochemistry. It was a seminal experience. At the time, the biochemistry faculty included Dorothy Hodgkin, the late Nobel Laureate who tapped into the power of X-ray crystallography to determine the 3-D structure of insulin and other critical molecules.

But his time at Oxford was only part of what motivated Weiss to make insulin his life’s calling. As part of his fellowship, he made forays into the Middle East and Africa. During one trip to Africa, he learned about some of the specific challenges faced by people with diabetes in the developing world.

Human insulin and insulin analogs must be kept cool, but in parts of the world without access to electricity, refrigeration is not an option. Instead, people would bury the life-saving medication underground in clay pots to protect against the stifling heat and harsh sun.

We need to develop insulin that can withstand high temperatures, he thought. How hard can that be?

Extraordinarily hard, as it turns out.

More than 35 years later, Weiss and his colleagues are on the cusp of accomplishing that very feat. He has launched a company, Thermalin Inc., to commercialize his research findings and forged a partnership with the French pharmaceutical giant Sanofi, which is investing in his work.

If he is successful in bringing his ultra-stable insulin to market, Weiss will do more than achieve his original goal of helping patients in some of the world’s poorest countries. His discoveries could have broad implications on the storage and delivery of insulin during natural and human-made disasters and make possible transformative delivery technologies, such as miniature, implantable insulin pumps and even bandages that secrete insulin through the skin.

And down the road, Weiss believes he can use what he has learned to deliver the ultimate prize: a “smart” insulin analog that responds to a patient’s glucose levels to prevent life-threatening reductions in blood sugar, or hypoglycemia.

“That would be revolutionary,” said Weiss, who is also serving as leader of Chemical Biology and Biotherapeutics for the Indiana University Precision Health Initiative. “My hope, against my self-interest, is that fewer and fewer people will eventually need insulin. But in the meantime, we’ll be making sure that people who have diabetes remain healthy and without such dreaded long-term complications as renal failure, amputations or blindness.”

INSULIN IS DESIGNED to be stored at between 36 and 46 degrees Fahrenheit. When it’s above room temperature, it can form amyloid, or fibers, which disable the insulin and make it unable to control blood glucose levels. Worse yet, injecting amyloid into the body may even be harmful.

The 3-D structure of insulin has three helices, one of which is unstable, Weiss explained. He hypothesized that altering the molecule to make it more stable might allow it to withstand higher heat. Specifically, Weiss focused on building a bridge between two peptide chains.

“It’s sort of like porridge that can be too hot, too cold or just right,” Weiss said. “If you make a bridge that is too long, it can still form amyloid. If you make it too short, you can’t form amyloid, but then you have no biological activity—it’s just dead. There’s a sweet spot in the middle that is just right. That’s what we’ve been investigating.”

He seems to have found it.

My hope, against my self-interest, is that fewer and fewer people will eventually need insulin. But in the meantime, we’ll be making sure that people who have diabetes remain healthy and without such dreaded long-term complications as renal failure, amputations or blindness.

Though not yet published, he is also developing hyper-stable analogs that can withstand even higher temperatures.

Joseph Avruch, MD, a professor at Harvard Medical School and the former head of the diabetes unit at Massachusetts General Hospital, has known Weiss for decades. He called his contributions to the field “tremendous.”

“The structure of insulin was first described almost 50 years ago, but that was the storage form of insulin, not the form in which it is active,” said Avruch. “He has uncovered the actual form insulin takes to activate its receptor and thereby change metabolism. That’s very important for understanding one of the most commonly used drugs in the world.”

WHEN WEISS FIRST began his crusade, his goal was straightforward: Improve therapies for patients in the developing world by creating insulin that doesn’t have to be refrigerated.

As he became more confident in his research, he shared his vision with Richard D. Klausner, MD, then the executive director of global health for the Bill & Melinda Gates Foundation. Klausner explained that a humanitarian-focused approach was unlikely to succeed on its own.

“He said that you have to develop a business plan in the West, and then have a humanitarian outreach that springs from that plan,” Weiss recalled. “It’s the same way that HIV drugs are given away for free in sub-Saharan Africa, but they’re sold in the West in a conventional way that makes money for the pharmaceutical companies.”

To sharpen his business acumen, Weiss went back to school and earned an MBA in 2010 from Case Western Reserve University Weatherhead School of Management. And he began thinking about how his ultra-stable insulin could be appealing in the United States and other traditional markets in affluent societies. The implications, it turns out, are extraordinary.

First, there’s the emergency preparedness aspect. One need only consider Puerto Rico, where roughly half of the island was still without power more than three months after Hurricane Maria tore through. More than 400,000 Puerto Ricans have diabetes, and many have struggled to find unspoiled insulin.

Other applications have the potential to touch even more people.

In the 1990s, Medtronic developed an insulin pump that was intended to be implanted in a patient’s abdomen and would only need to be refilled every three months. The problem, Weiss said, was that the pump would get clogged by amyloid tangles because the body’s internal body temperature is too warm.

He’s a guy who spans the whole range of taking something at the most fundamental scientific level that has important medical implications and translating that into a drug. To learn how to do that, he went and took an MBA. That’s especially unusual. He’s a one-man discovery and drug company.

Weiss’ heat-resistant insulin would solve that problem and prevent clogging, he said. What’s more, his insulin can be more heavily concentrated, allowing the reservoir—and therefore, the pump—to be significantly smaller. With today’s technologies, the pump could be connected to a computerized glucose monitor, which would analyze how much insulin the person needs and release the appropriate amount.

“To have this technology, everyone would want it,” said Weiss, who holds the Robert A. Harris Chair in Biochemistry & Molecular Biology. “There would be no scarring of the skin or unsightly injection-site reactions. For adolescents, there’s no embarrassment, and it would be fantastic for athletes.”

He and his team are also continuing to perfect hyper-stable insulin, which can withstand temperatures so high that it can be boiled. That would enable its use in high-temperature polymer injection molding. The purpose? Weiss seeks to manufacture a Band-Aid-like patch that Type 2 diabetics could wear on their skin to provide a slow trickle of insulin.

The list of other ways his insulin analogs could benefit patients seems to have no end. Ultra-concentrated and yet fast-acting insulin for people who require high doses. Maybe even insulin that can be taken orally.

“He’s a guy who spans the whole range of taking something at the most fundamental scientific level that has important medical implications and translating that into a drug,” Avruch said. “To learn how to do that, he went and took an MBA. That’s especially unusual. He’s a one-man discovery and drug company.”

Of course, there’s his outstanding curriculum vitae, but it was more than that. “He’s a seasoned leader,” Hess said. “He has this passion and curiosity, and it’s all that collectively that I really got excited about.”

Weiss was recruited as part of the Indiana Collaborative Initiative for Talent Enrichment, or INCITE. The program, established in 2017 with a $25 million grant from Lilly Endowment Inc., is designed to attract top scientists to Indiana University School of Medicine and the state. Weiss certainly fits the bill.

In his role with the school’s Precision Health Initiative, Weiss will utilize his expertise in chemical and structural biology to help other scientists identify potential drug candidates or improve existing drugs, much as he has done with his own science. His leadership will be vital in making basic science research applicable to patients.

“Without structural biology, you will hit a bottleneck,” Hess said. “If you’re interested in drug development, there’s only so far you can get without these tools.”

For his part, Weiss said he came to IU School of Medicine because he views it as a positive and growing environment that will ensure he can continue translating his discoveries into new therapies.

Growing up in Cleveland, Weiss was an avid baseball fan and was twice a finalist to be a bat boy for the Cleveland Indians. “I still love baseball, so I look at things in baseball metaphors,” he said. “The insulin pump is like a single. The Band-Aid is like a triple. The smart insulin would be like a grand-slam home run.”

One thing’s for sure: With an All-Star like Weiss on the IU School of Medicine team, we’re sure to get a win for patients.

To support diabetes research at IU School of Medicine, contact Kathryn Red at kred@iu.edu or 317.274.3685.