‘A Death Star for Blood Clots’

Researchers in emergency medicine are exploring nanoparticle technology that could break up dangerous clots. 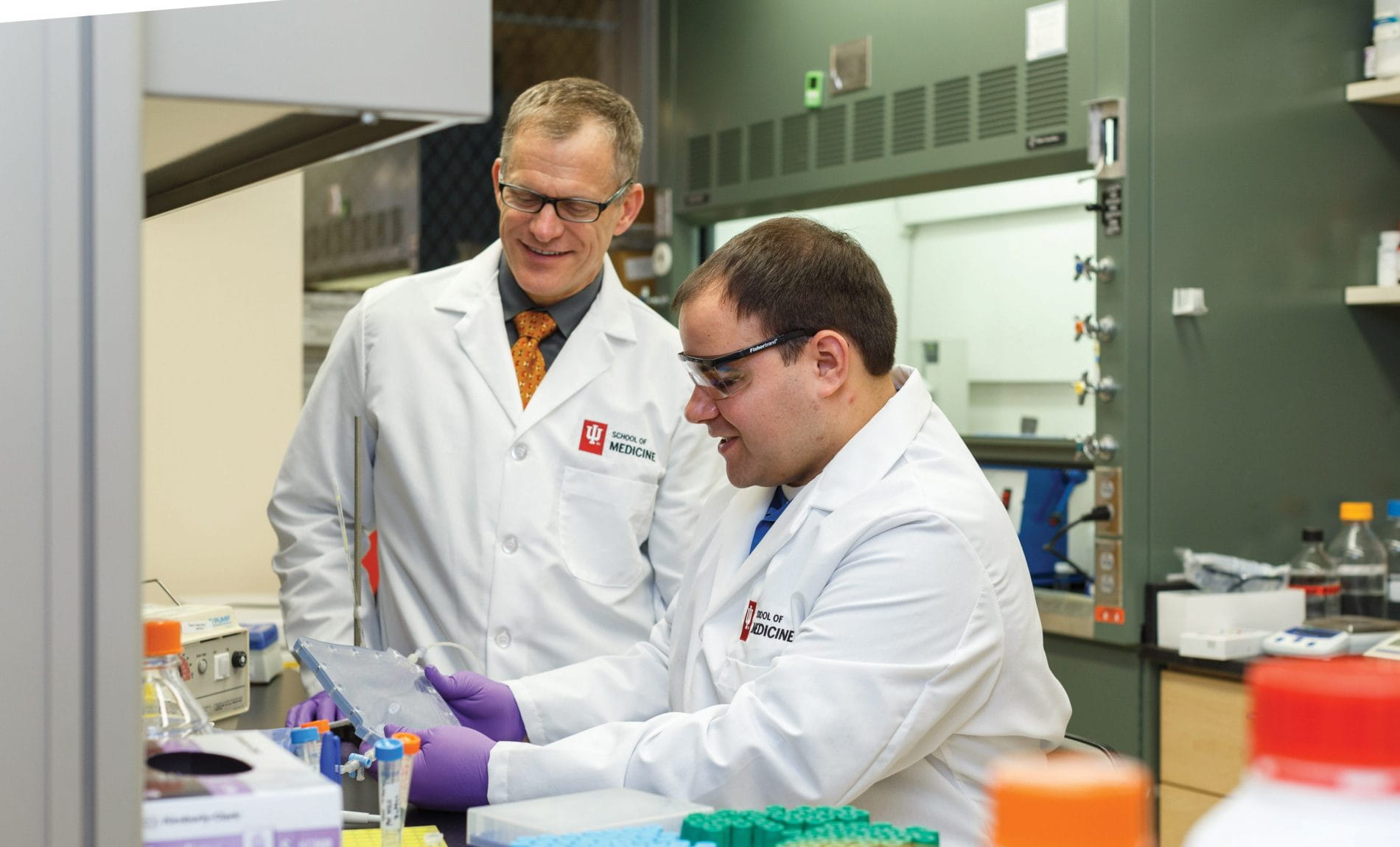 A PAIR of Indiana University School of Medicine faculty members are using nanoparticle technology to develop a therapy to dissolve life-threatening blood clots while eliminating the risks associated with current treatments.

Roughly 900,000 Americans develop blood clots each year, and as many as 100,000 people die from them, according to the Centers for Disease Control and Prevention.

Clots are especially dangerous when they travel to the lungs, a condition known as a pulmonary embolism. “A pulmonary embolism can cause the right side of the heart to get swollen and injured, and that can lead to problems such as shortness of breath and an inability to do a person’s job,” said Jeffrey Kline, MD, a professor of emergency medicine at Indiana University School of Medicine.

“In the worst case, it can cut off the blood flow so badly that it kills suddenly, and it can be a tragic end.” After years of working in the emergency room, Kline has seen up close the toll blood clots take on patients, and he is partnering with Nathan Alves, PhD, a chemical and biomolecular engineer and assistant professor of emergency medicine, to find a solution.

Typically, a naturally occurring enzyme called plasmin chews up blood clots. But when a clot is too big, the body can’t produce plasmin quickly enough.

A drug is currently available that activates plasmin, but its effects are systemic, kicking clot-dissolving activity into gear even where it isn’t needed. That causes a new set of problems. About 7 percent of people who receive the drug suffer a life-threatening hemorrhage, and approximately 2 percent have bleeding in the brain.

“Imagine your house has a trash can on fire,” Kline said. “The way we put the fire out now is we put on all the sprinklers in the entire house.

It puts the fire out, but it also floods the house.” Kline and Alves hope their treatment works more like a fire extinguisher, hitting its target without causing collateral damage.

Their approach involves the use of a nanoparticle to deliver plasmin directly to the clot.

Here’s how: The team produces modified plasmin in the lab using recombinant engineering. Next, thousands of the plasmin enzymes are stuck to a nanoparticle designed and fabricated by Alves. (Kline describes it as a “fuzzy ball of Velcro.”) The enzymes’ clot-digesting “mouths” are held close against the particle, preventing them from chewing and doing damage as the cluster makes its way through the body.

Each of the plasmin enzymes has a u-shaped tail. It is covered with amino acids that like to bind to blood clots. When the nanoparticle bumps up against a clot, the tails stick to it and pull the enzymes loose from the nanoparticle. The enzymes’ mouths are now free to start chomping away.

As a fail-safe measure, the nanoparticles are programmed to destabilize and self-destruct if they don’t find a blood clot about 10 seconds after entering the bloodstream. That prevents plasmin from spreading elsewhere in the body or making its way to the brain, where it could cause serious bleeding.

“This thing is like a Death Star for clots,” said Kline, who was recruited to IU in 2012 from the University of North Carolina School of Medicine with funding from the Lilly Endowment Physician Scientist Initiative. “Once it sticks, it’s going to unload a lot of its cargo all at once. Then it rolls away and blows apart.”

Nanoparticle technology is still highly experimental in healthcare, and there are very few FDA-approved uses in patients. Alves said one problem is that most researchers try to package a drug inside the nanoparticle. That requires finding a way to open the nanoparticle when it hits its target. By contrast, their nanoparticle has the plasmin hanging on the outside, simplifying the process.

“It’s like bringing a peanut butter and jelly sandwich to work in a plastic bag,” said Alves. “You can’t eat the sandwich through the plastic. You have to open it. We don’t have to do that.”

“This is a really elegant solution to a complicated problem,” he added.

While the research is still in the very early stages, Kline and Alves are optimistic. They have worked with the Indiana University Innovation and Commercialization Office to file a patent and launch a company, Indiana Lysis Technologies LLC, which was recently named best biotech invention at the 2018 McCloskey New Venture Competition.

While the road ahead is long, Kline and Alves plan to continue plowing forward until the treatment is ready for patients. They are continuing proof-of-concept testing with ex vivo models, including in a 3D-printed lung, and are applying for additional funding.

For Alves, who once worked in the Naval Research Laboratory, the work has become especially urgent. He has experienced a number of deaths in his family due to pulmonary embolisms, and his father was recently diagnosed with a chronic thromboembolic disorder, which leaves him with blood clots in his lungs. “It’s become very personal,” he said.

“This has humongous implications,” Kline added. “Clots kill more humans than any pathogenic cause. What’s the No. 1 killer in the United States? Heart disease. Almost all of that is a clot in a coronary artery that blocks blood flow. This could allow for rapid removal of blood clots with minimal bleeding risks.”

To support research related to blood clots or other areas within the Department of Emergency Medicine, contact Ken Scheer at kescheer@iu.edu or 317.278.2122.