Peer Baekgaard defied death during World War II. Yet Alzheimer’s disease was a foe he couldn’t outrun. Now, Barbara Baekgaard and her family are helping the IU School of Medicine make it a fight patients can win. 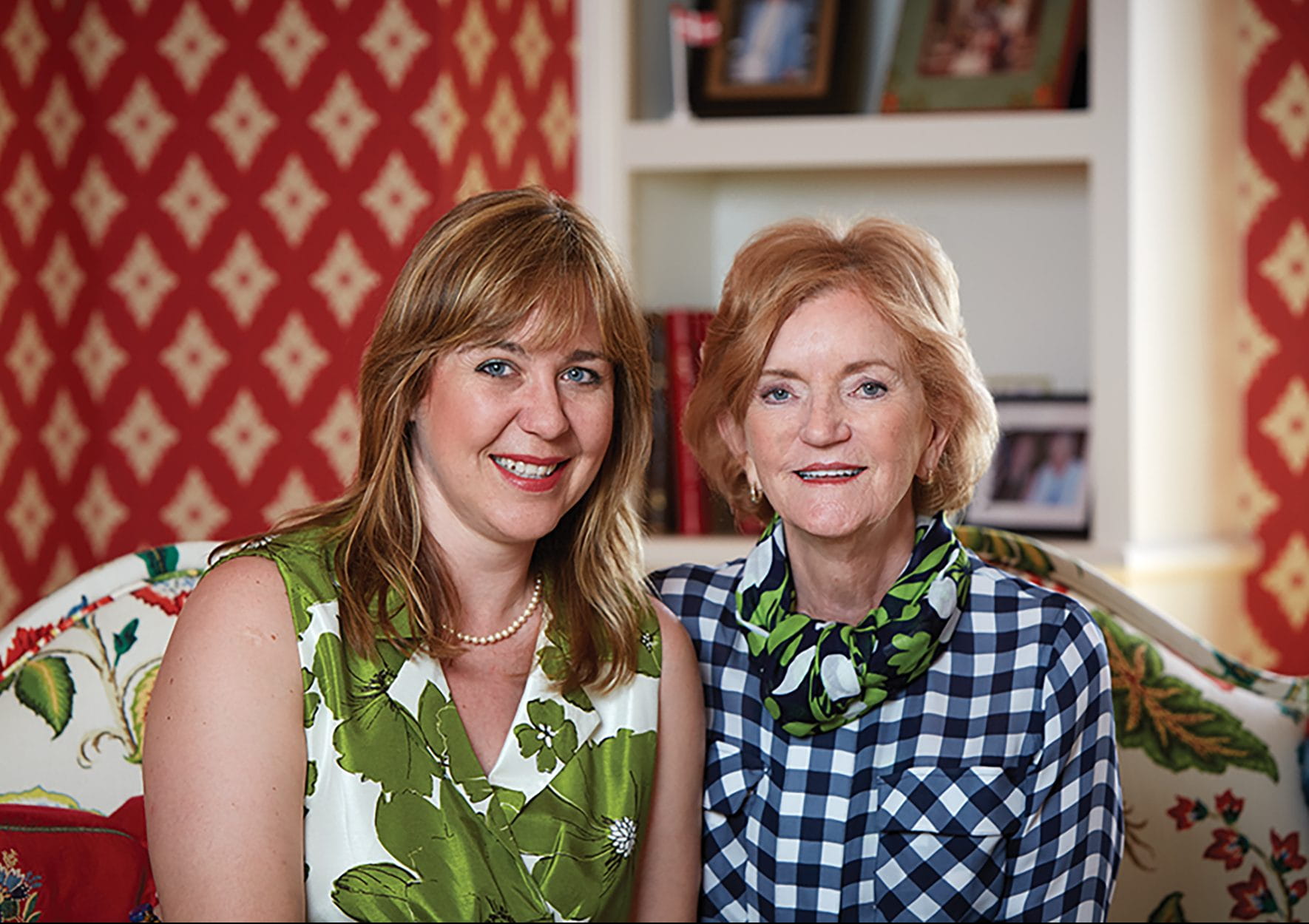 PEER BAEKGAARD had a knack for cheating death.

As a young man growing up in Denmark during World War II, he joined the Danish Underground and helped Jews flee to freedom. He was eventually captured by the Nazis, shipped by train to a prisoner-of-war camp, and sentenced to die.

On one occasion, Peer and his five cell mates complained to a seemingly friendly guard that their cramped quarters meant they had to sleep in shifts. The guard asked for volunteers. Three of the prisoners stepped forward, thinking they would be moved to another cell. Instead, they were shot at point-blank range.

Peer would defy death other times. The paperwork listing each prisoner’s sentence was destroyed during a British air raid, providing him an unlikely stay of execution. A few months later, he and his fellow prisoners found the gates to their P.O.W. camp left open. They snuck out, hid in fields and brush during the day, and made the long trek back to Copenhagen at night. They only learned the war had ended when they arrived home.

While Peer survived the atrocities of World War II, he later faced another type of evil that he couldn’t beat: Alzheimer’s disease.

He died on July 1, 2007, robbed of his strength, independence and quick mind.

“He had survived so much and then to have this hit him, it just seemed so unfair to me,” said Barbara Baekgaard, who married Peer in 1990. “I would rather have had him drop dead of a heart attack than have him suffer like he did.”

Now, Barbara is fighting back against the disease that took Peer from her. She and her four children have established a $2 million endowed fund at the Indiana University School of Medicine to help put an end to suffering caused by Alzheimer’s. As part of the Indiana University Bicentennial Campaign, income from the fund will be matched each year, doubling the dollars available for research.

The gift is already being put to good use. The Barbara and Peer Baekgaard Chair in Alzheimer’s Disease Research played a critical role in the recruitment last year of Dr. Liana Apostolova, an Alzheimer’s specialist from UCLA. Apostolova focuses on understanding the genetic underpinnings of Alzheimer’s disease and deploying high-tech imaging to study how it unfolds in the brain.

“I want to know that someday no one will have to worry about this disease,” said Barbara, who is co-founder of Vera Bradley, the Indiana company best known for its colorful quilted handbags. “I want them to find out what causes it, or how to delay it, or ideally how to cure it. Certainly that would be my goal.”

It’s a bold challenge, but IU physicians and scientists are pledging to rise to the occasion.

“Supported by the generosity of people like Barbara and her family, we are building a team that is working tenaciously to understand how Alzheimer’s disease develops and how we can slow or block its progression,” said Dr. Jay Hess, dean of the IU School of Medicine. “These people are passionate. They won’t be satisfied until we’ve stopped the disease in its tracks.”

After the war, when Peer was an exchange student in California, an agent had him screen test for the role of Tarzan. He returned to Denmark and never got the part, but decades later, the chiseled good looks and broad smile that got him noticed in Hollywood won the attention of his future wife.

When Peer and Barbara’s paths first crossed in the late 1980s, he was already a successful businessman, having immigrated to the United States years before. Vera Bradley was just beginning to take off. The two served on a board together. Barbara remembers walking into her first meeting and being instantly struck by the commanding man across the room. “I think I’m going to like serving on this board,” she recalls thinking.

They wed three years later, the second marriage for both.

As business leaders, Barbara and Peer maintained dizzyingly busy schedules. He remained in Chicago during the week to run Baekgaard Ltd., a company that specialized in men’s gifts and accessories. Barbara spent weekdays in Fort Wayne, Indiana, building Vera Bradley and personally overseeing the many designs that grace the company’s purses, luggage and other products.

In hindsight, those separate schedules allowed Peer to conceal the early signs of his illness, Barbara acknowledges.

She first noticed something was amiss in the early 2000s during a trip to Atlanta. They flew in separately and were scheduled to meet at the hotel. He went to the wrong one. “That seems so minor to most people, but he was so sharp,” Barbara said. “It was so out of character.”

Over time, she noticed more and more little slip-ups.

Not long after, Barbara visited the IU School of Medicine for a meeting of the cancer center fundraising board. (Under the leadership of Barbara and Vera Bradley co-founder Patricia Miller, the company foundation has committed $35 million to breast cancer research at IU.) She mentioned her worries about Peer to a friend at the school and arranged to bring him for an evaluation with Dr. Martin Farlow, a nationally respected IU neurologist.

Even though she knew something was wrong, the diagnosis of Alzheimer’s disease left her floored. She vividly recalls being unable to control her tears.

“My parents lived into their 80s, their minds were perfectly sharp,” Barbara said. “I wasn’t aware of Alzheimer’s. I truly didn’t know anyone who had it. This was just a shock, and of course I started reading about it, and I realized it’s the long goodbye and the road to nowhere. There was nothing I could do to change this.”

Current treatments for Alzheimer’s disease can do little to slow its march, and like Peer, patients inevitably succumb to their disease. Barbara and her family recognize that research is the only hope to change the outcome.

Joanie Hall, Barbara’s oldest child and a trustee of the family foundation, said supporting the program at IU is a natural fit.

“Our main goal is to do things my mom can be proud of,” she said of the family foundation. “She fell in love with IU through the Vera Bradley Foundation and through the team there when Peer was diagnosed. We’re giving back for all the kindness she was shown, and we’re looking for a way to make life easier for Alzheimer’s patients and their caregivers—to stop it, cure it, cut it off in its path.”

That’s where Apostolova comes in. As the first holder of the Barbara and Peer Baekgaard Chair, she joins a team of dozens of IU researchers from diverse backgrounds looking at what goes wrong in our genes to give rise to Alzheimer’s, how those changes affect our brains, and how we can develop new treatments to intervene.

Specifically, she is seeking to:

All of this is crucial to developing new drugs and other therapies.

This past summer, shortly after arriving at IU, Apostolova traveled to Fort Wayne to meet Barbara and learn about Peer. She left promising to help build a world-class research program and to make progress in Peer’s memory.

“I would never trade what I do for anything else,” Apostolova said. “I truly feel very passionate.”

For her part, Barbara feels confident that Peer would be proud to have his name connected to Alzheimer’s research. When he was a patient, he agreed to participate in clinical research studies, even though some of the tests were painful and offered no benefit to him.

“He knew he couldn’t be cured but he wanted to help,” Barbara said. “We just want to know that some good will come from this.”

Back during the war, on his 23rd day at the P.O.W. camp, Peer scribbled a long note to his mother describing life as a prisoner—his measly rations of bread, butter and soup, the sounds of planes flying low overhead, and his yearning for everyday items like a washcloth, a pencil and Ovaltine.

“Can it go on much longer now with this God-awful war, what do you think?” he wrote.

Today, the Baekgaard name is associated with another war. While the enemy is different, it is also brutal and cruel. With the help of Barbara and her family’s generosity, we can hope that the end may soon be in sight.