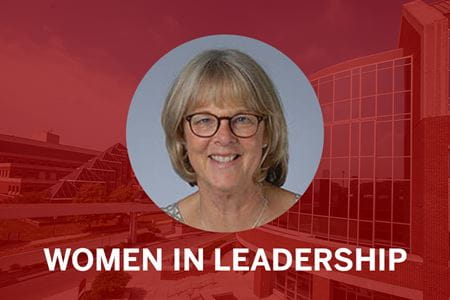 Maureen Harrington, PhD, remembers the day she first marveled at the wonder of cell biology. It was third grade. Her father, an endocrinology researcher, brought home a series of Polaroid photos showing single-cell division giving rise to a mouse embryo.

“I still remember sitting there looking at these pictures and thinking this is the most amazing thing ever,” said Harrington, associate dean for Medical Student Education-Foundational Sciences and a professor of biochemistry and molecular biology, and of anatomy, cell biology and physiology. “I like figuring out how things work inside the cell.”

Harrington’s early exposure to cell biology guided her initial interests in nutrition, toxicology and endocrine pharmacology. Throughout the 1980s, during her graduate studies at the University of North Carolina at Chapel Hill (UNC), her postdoctoral research at the University of Southern California (USC), and her fellowship and initial faculty position at Indiana University School of Medicine, the confident and curious Harrington didn’t realize being a woman leader in medical science was rare.

In her class at UNC, three out of five members were female; at the lab in California, 60 percent of the research scientists were women.

“A lot of women are being trained as graduate students and postdocs, but the next step up is where the black hole comes,” observed Harrington.

Neither of her two female classmates from UNC continued in scientific research long-term. And although the lab at USC was filled with women, most did not advance to positions of leadership. The longer she continued in academic medical science, the fewer women were at the table.

“It’s weird sometimes,” she admitted. Yet she loved the autonomy of research. “I don’t like being told what to do. Academic research is good for that. As long as you can get funded, you can do it.”

Harrington found a supportive environment at IU School of Medicine with male department chairs and colleagues who encouraged her as a leader. In 2001, she was recruited by Wade Clapp, MD, to re-establish the Medical Scientist Training Program (MSTP), an eight-year MD/PhD dual degree program which integrates clinical medical training with cutting-edge biomedical research.

Together, Clapp, an MD, and Harrington, a PhD, led efforts to formalize the dual degree program—adjusting timetables and streamlining course requirements to eliminate redundancies—while also securing funding for admitted students through an NIH-backed grant and a gift from the Lilly Endowment.

“She has been a fantastic leader, mentor, role model and advocate with the program for 20 years,” Clapp said. “She brought perspective and credibility about recruiting women, she was a tremendous advocate for all students, helped those that had a hiccup in some aspect of training, and she was always available to talk to students—no matter what else she had going on.”

Today, the MD/PhD program is fully funded and accepts an average of seven students a year from an applicant pool of about 200, Harrington said. The male-female ratio is purposely kept at 50-50.

“Curiosity is what I look for—someone who is always asking, ‘Why?’,” she said of the selection process.

In her role as associate dean for medical student education in the foundational sciences, Harrington led the final stages of creating and implementing a new curriculum in 2016, collaborating with basic science departments and teaching faculty across all nine campuses.

“Maureen is able to listen to feedback thoughtfully and look for pragmatic solutions that meet the needs of the school while respecting the hard work and effective methods used in the past,” said Bradley Allen, MD, PhD, senior associate dean for Medical Student Education. “She has reached out early and often to hear feedback from students to continuously improve and enhance the approach, content and delivery methods of the IU School of Medicine Phase One curriculum for first- and second-year students.”

“I can’t stand being micromanaged, so I don’t micromanage,” she said. However, she simultaneously recognizes the power of collaboration. “I don’t have the fountain of ideas. I like working in teams.”

As part of developing the MD/PhD program, Harrington worked with the Weldon School of Biomedical Engineering at Purdue University. In her current role with Medical Student Education, she has facilitated meetings and led other initiatives to get basic science faculty throughout the state to talk to each other more.

“Dr. Harrington is approachable, interested and responsive,” Allen said. “She is a patient listener and helps find equitable solutions that are shared with all parties.”