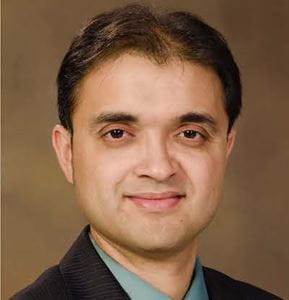 A team of researchers including Ankit Desai, MD, have found that an inflammatory protein called interleukin-18 precipitates fatal heart problems in people with sickle cell disease. Their findings, published in November in the journal Blood, offer hope of lowering the high rate of sudden death in these patients.


“This is a unique study that illuminates an understudied area and addresses critical health disparities for an underserved population of patients,” Desai said.

Sickle cell disease is an inherited blood disorder that predominantly impacts Black people. Until the late 1990s, few people with the disease survived beyond adolescence. Improved vaccines and preventative treatments have lengthened their lifespans, but people with sickle cell disease still suffer from serious, painful complications, and often die suddenly in their 40s or 50s.

Desai has long hypothesized that many of these deaths were attributable to heart arrhythmias and other fatal cardiac problems, despite a lack of existing research in this area.

“When I entered the field, the disease’s impact on the heart was poorly studied,” he said. “These patients were observed to have various risk factors for sudden cardiac death, but there were no studies on the development of these risk factors.”

He and his colleagues began addressing this gap in the research more than a decade ago, and in 2014 reported their findings on how heart problems manifest in people with sickle cell disease. The new study in Blood delves deeper into the “molecular underpinnings” of why—and the answer appears to lie with interleukin-18, a cytokine encoded by the IL18 gene that can cause inflammatory reactions.

“We demonstrated this with a two-pronged approach,” Desai explained. “First, we established that the mouse model of sickle cell disease mimics the same heart problems we see in patients. Then, using genetic and genomic studies, we demonstrated that both mouse models and humans with sickle cell disease who had elevated levels of interleukin-18 in their blood were more likely to suffer ventricular tachycardia or die than those with low levels.”

Critically, the team also identified a potential treatment. As part of the study, they tested a drug called IL-18bp, which inhibited levels of interleukin-18 in mouse models and appeared to prevent them from developing sickle cell-associated heart problems.

This is a major triumph, Desai said. Despite its high prevalence, sickle cell disease is under-resourced and understudied relative to other inherited conditions that do not have a predominant impact on Black people.

“There are so many challenges in studying sickle cell disease. To say that these patients are underrepresented in research is an understatement,” he said.

Desai is grateful for the talented interdisciplinary team of investigators who worked on the study, particularly Dr. Bum-Rak Choi of Brown University, and for the support provided by Indiana University and the National Institutes of Health.

Most of all, though, he is grateful for the patients.

“Sickle cell is a chronic and life-altering disease,” he said. “We could not have achieved this breakthrough without the patients who allowed us to study them for the benefit of others.”