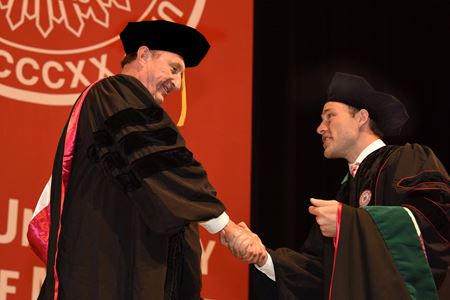 Nearly 30 years ago, John Brown, MD, saved David Maurer’s life. At the Class of 2018 Commencement Ceremony, Dr. Brown guided Maurer through another life-changing event: graduation from medical school. During the ceremony, Dr. Brown hooded Maurer. The act is a rite of passage, signaling Maurer’s transition to becoming a physician.

Maurer’s life got off to a rough start. At 3-months-old, he struggled to breathe because of a blood vessel wrapped around his trachea. This congenital heart defect led him to Riley Children’s Hospital, where Dr. Brown performed the surgery that saved Maurer. Now an active triathlon competitor, Maurer only bears a small scar on his chest as a reminder of what could have been. That, he adds, and slightly lower blood pressure in his left arm.

During the course of the next 30 years, Maurer explored many interests on his way to medical school – from show choir at Purdue University to a master’s degree in kinesiology at Pennsylvania State University. Throughout this time, practicing medicine was always a goal at the back of Maurer’s mind. Becoming a medical student at IU School of Medicine did more than bring Maurer closer to his goal, though. It also reconnected him with a physician who would change his life – again.

“I’d never formally met Dr. Brown before medical school,” Maurer said. “I just knew his name. During my third-year surgery rotation, I walked into the operating room and there he was. He didn’t remember me so I told him, ‘We met 29 years ago and I don’t blame you for not remembering, but you gave me this scar!’”

“One of my last days in surgery with Dr. Brown, there was a child with a similar congenital heart issue to the one I had as a kid,” Maurer said. “We talked about the procedure a little bit. Then Dr. Brown said ‘scalpel to David.’ I remember standing there with the man who ultimately saved my life and he’s telling me how to do the surgery. He’s even letting me do part of it. When we finished the procedure, I found Dr. Brown and almost started to cry because of how big of a deal that experience was.”

Becoming a patient advocate in anesthesia

It’s not surprising with experiences like these that Maurer came into medical school convinced that he was going to become a surgeon. It wasn’t until his final third-year clinical rotation that Maurer’s focus changed.

“So, as you might guess, having heart surgery was something that always pushed me towards specializing in surgery,” Maurer said. “After my three months of clinical experiences in surgery, I thought I could do it, but I wasn’t sure if it was something I loved. Then I worked in an anesthesia rotation and loved it. I feel like the work anesthesiologists do is sometimes overlooked, but to care and advocate for the patient while they’re in surgery is incredible.”

Maurer will soon begin his first year of residency in Phoenix, Arizona before joining an anesthesia residency program at University of Colorado in Denver. Maurer’s legacy at IU School of Medicine will not soon be forgotten though. As a first-year medical student in Muncie, Indiana, Maurer came up with the idea to create a 5K to help raise money for Riley Children’s Hospital. This 5K is now a signature annual event for Rock for Riley, a student-run philanthropy group that raises money for Riley Children’s Foundation.

Born in Bluffton, Indiana and raised in Greenville, Ohio, Maurer has a bit of an Hoosier-Buckeye identity crisis. With an IU School of Medicine medical degree, there’s no denying the fact that he’s an honorary Hoosier now though.