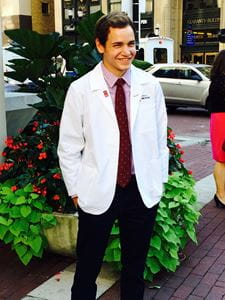 When I got my white coat at first-year orientation I instantly knew it was different. I had forgone the original line to get our coats and opted instead to go to lunch early and come back after the crowd had thinned out. The line formed by the then largest medical student class ever at IU School of Medicine was daunting. So, when I swung back to collect my coat and put it on, I realized it was peculiar—the lapel covered much the IU School of Medicine emblem; I had two buttons on the left where the others had three on the right; I had no extra pockets on the inside of the jacket and no release cut in the back like everyone else’s; the material of mine was thinner, but somehow starchier.

In my first two years of medical school, I wasn’t wearing my coat all that often for others to notice but as I started the clinical years, it became more evident that my coat was odd and perhaps not perfectly constructed for the wards. And yet, about midway through third year, when my classmates were stuffing additional reference materials in their inner pockets and I found myself wishing I had the extra room, I realized these “errors” in a tailor’s judgment maybe somehow made sense—I was a little different.

As an undergraduate at Denison University in Granville, OH, I majored in religion focusing on American religious history and the various traditions that arose from the country’s constitutional experiment. From there, I went to graduate school at IUPUI and received a master’s in philosophy and bioethics where I focused on issues of justice and how obligations to the public and patients challenge key duties of the healthcare system. I’d spent the majority of my academic days reading, writing, and discussing. When I came to medical school and started going through hours of lecture and multiple choice tests, I really didn’t know what I had gotten myself into.

But things evened out. With the help of my classmates, I began to figure out how this new-to-me style of learning worked and my third year on the wards was truly one of the most rewarding educational experiences I’ve had. Now beginning my fourth and final (God willing) year of medical school, I definitely feel like a medical student and not so much the religion/philosophy nerd with a weird white coat. But so too have I forgotten what it was like to focus on the humanities which I enjoyed so much.

For the next two weeks I’ve been given the opportunity to relive and reinvestigate that experience. Along with 13 other medical students from across the country, I’ll travel to Berlin, Germany, and Krakow, Poland, to study medical ethics as a part of the 2018 medical cohort for the Fellowships at Auschwitz for the Study of Professional Ethics (FASPE). FASPE uses the power of place and the context of the Holocaust to educate students on the past moral faults of their profession to discuss modern topics.

As I’ve been reading in preparation for our daily seminars and excursions, I’m getting glimpses into why I was drawn to humanities for so long—the interminable conflict of certain situations and decisions, discussion of problems that threaten society, the answers to which lie in fundamental questions about person and truth. Having now completed a large chunk of my medical education, I’m eager to revisit this study of thought and see how my perspective as future healthcare professional will color the problems I used to think about and the solutions I used to think were best.

Stay tuned for more blog updates from Josh as he completes the FASPE program this summer.

MS4, ethicist, proud angler of 8 different trout and salmon species (currently on the hunt for number 9).