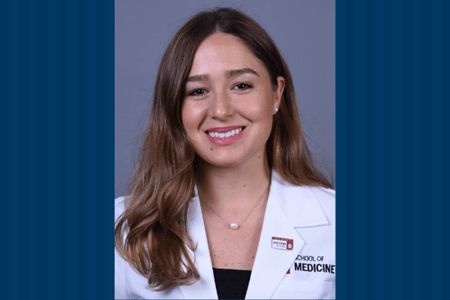 Victoria Sanchez, a second-year medical student at Indiana University School of Medicine, hails from a family of strong women. Her grandmother, Antonia, who was born in Cuba in 1920 to a farming family of 11 children, dreamed of one day becoming a doctor. She ultimately earned her doctorate degree in pedagogy from the University of Havana and ran an after-school center out of her own home for children from low-income families in Miami. She was recognized for her civic leadership both in Cuba and the United States.

Sanchez, who was close to her grandmother, possesses a similar drive for knowledge and love of humanity. She recently published a first-author paper in the Nature research journal Scientific Reports, the seventh-most cited journal in the world, presenting critical research about one of the most aggressive and intractable types of cancer – glioblastoma. In this disease, tumors expand rapidly in the brain, evade the immune system and create their own blood supply. Even with chemotherapy and surgery, median survival after diagnosis is 15 months.

Sanchez’s research, conducted at the National Institutes of Health from 2017 to 2019 under Principal Investigator Edjah Nduom, MD, involved mouse models used in glioblastoma research. Studying tumors in mice is an important precursor to clinical trials and informs researchers how the disease responds to new drugs.

Tumor cells are sometimes tagged with luciferase during experiments, which is the enzyme that makes lightning bugs glow at night. Luciferase is inserted into cancer cells by many scientists because it helps them track tumor progression, signaled by increased fluorescence. What Sanchez and the team of researchers discovered is that the luciferase-tagged glioblastoma cells can change the immune system response in the mouse’s brain.

This means that any conclusions made about a certain drug being tested to treat glioblastoma might be influenced by the presence of luciferase. Importantly, these models may not truly resemble how the disease acts in humans.

Because glioblastoma has no effective therapies, this type of discovery is extremely important. It may lead to changes in how experiments using mice are designed, which are necessary before first-in-human clinical trials. 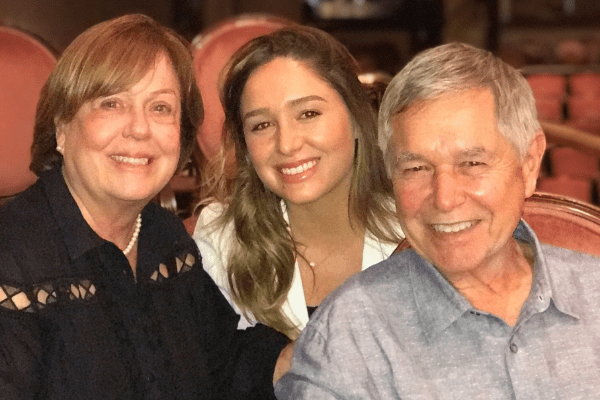 Sanchez has an incredible passion for research and for improving the lives of those with aggressive brain cancers. “As a freshman in college, the idea that what I was doing in the lab could actually impact the lives of cancer patients drew me. I love research, and my experiences have reinforced that I want to pursue it,” Sanchez said.

She initially worked in a lab that focused on prostate cancer research during her undergraduate tenure from 2013 to 2017 at Florida International University and recently completed a summer with Harvard Medical School as a Visiting Research Internship Program (VRIP) Scholar.

During her two years at the National Institutes of Health after college, Sanchez worked on the current publication. Writing a scientific manuscript is a significant feat, involving multiple rounds of revisions, failed experiments, and sweat and tears to accomplish. Bringing new knowledge into the world is difficult work.

“Early on, you have to figure out the problem you want to solve and what you’re passionate about,” Sanchez said. After initial feedback on the manuscript, the team worked for a year to revise and improve experiments. When she revisited the paper, she rewrote the entire piece.

“That’s how much you grow in a year,” Sanchez said. She was 22 at the time of initial submission and 24 when it was accepted for publication.

Now in her second year at IU School of Medicine on the West Lafayette campus, Sanchez is considering a career in academic medicine.

“I’d love to be involved in the development of cellular immunotherapies. I’m really lucky to have faculty at IU School of Medicine who support students get to where they want to be,” Sanchez said.

One of her mentors at IU School of Medicine, Gregory J. Loomis, MD, strongly advocates for her ambitions. As a visiting assistant professor of clinical neurological surgery, he loves the process of teaching students. 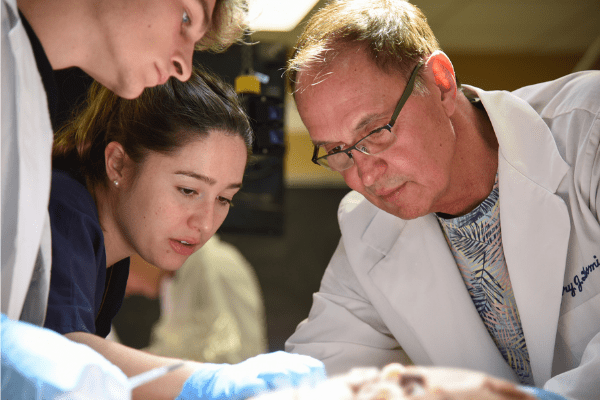 “We have a spectacular class at West Lafayette,” Loomis said. “Victoria is a shining light. We have students like her with a burning passion to learn, and we as faculty work to teach them the skills to become excellent doctors.”

To expand her interest in pursuing research that will directly impact patient lives, Sanchez and second-year student Claire Marks recently founded a social justice journal club with faculty advisors Loomis and Julianne Stout, MD. They plan to look at how health disparities in medicine and inequity shape patient lives through examining current research, including clinical trials.

“Above all is the importance of patient care, and to me, research and designing clinical trials is a critical part of that,” Sanchez said. “Patients keep us grounded in why we’re doing the work we’re doing.”