It’s a Match: Jeremy and Sarah 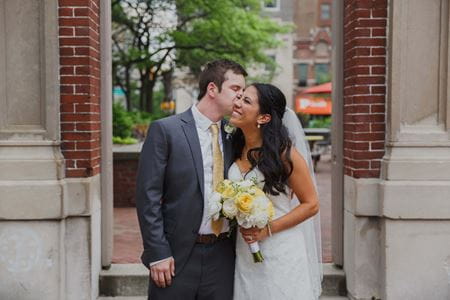 On March 16, Jeremy and Sarah Sherer eagerly refreshed their computers after finishing a traditional Kenyan dinner. They were waiting for an email that would change their lives as a young married couple: Their Match results. While many of their IU School of Medicine classmates received this news in Indianapolis, the Sherers were on a two-month clinical rotation in Kenya when they discovered they’d be heading to Phoenix, Arizona for their next stage of medical training.

A global calling to service

Jeremy and Sarah met six years ago during a Sam H. Jones Community Service Scholarship retreat. Meeting at an undergraduate service learning retreat was no coincidence; both of the Sherers have a heart for giving back that has lead them on global journeys together.

“We’re in Kenya because we believe our call to service extends beyond the borders we’ve grown up knowing,” Jeremy said.

The couple’s borders continue to expand; Sarah and Jeremy have travelled to China, Costa Rica, El Salvador, France, Greece, Ireland, Italy, Kenya, Mexico, Morocco, Nicaragua, Peru and Spain. The opportunity to be involved in the AMPATH program abroad was one of the reasons the couple was excited to attend IU School of Medicine for their medical training.

“During an undergraduate service learning trip in Eldoret, Kenya I learned about AMPATH and the opportunities for IU School of Medicine students,” Sarah said. “I am so grateful for the opportunity to return to Kenya and learn as much as I can about other cultures so that I can be a better physician.”

Sarah and Jeremy – both born in Indiana – spent the first two years of their relationship in Indianapolis. Sarah had one year left to complete her undergraduate degree when Jeremy began training at IU School of Medicine’s Terre Haute campus. The distance strengthened the Sherer’s already strong bond.

“I was so excited for Jeremy to get into IU School of Medicine,” Sarah said. “During the year we were apart, we decided to make it a point to talk on the phone every night at 11 pm to keep our relationship strong. I think that being in different cities for a year was a time of growth for us and it made us realize that we never wanted to be apart.”

Thankfully, Jeremy and Sarah don’t have to be apart again. They chose to participate in the National Resident Matching Program (NRMP) as a couple – which uses a different matching algorithm than the standard individual Match – so that they could improve their chances of obtaining residencies in the same geographic locations. Jeremy pursued a year-long master’s in public health through IU School of Medicine’s dual MD/MPH program so that he could explore his passion for public health and match at the same time as Sarah.

“Going through the match is one of the biggest leaps either of us has ever taken, so the fact that we get to go through this side-by-side makes me feel so much at ease,” Jeremy said.