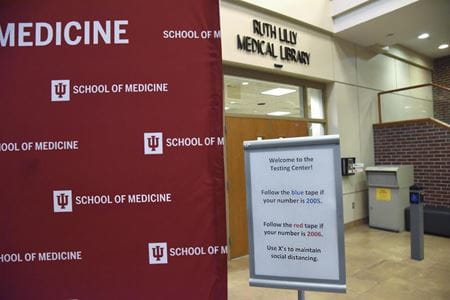 At a time when medical professionals have become the nation’s heroes, the pipeline for licensing new physicians began experiencing a clog. Due to COVID-19 restrictions, testing for various Steps of the United States Medical Licensing Examination (USMLE) was temporarily halted when test centers were forced to close, quickly creating a backlog of over 17,000 medical students and residents whose exams needed to be urgently rescheduled.

Indiana University School of Medicine has led the way for a creative solution to help reopen the licensure pathway for MD candidates. The school has been selected as one of just six medical schools in the nation to host a regional testing site for USMLE.

“This was the fastest way to increase testing capacity for the system,” said Paul Wallach, MD, executive associate dean for educational affairs and institutional improvement at IU School of Medicine. “We made 2,000 test seats available in the system.”

Wallach is vice chair of the executive board for the National Board of Medical Examiners (NBME), the organization which co-sponsors the USMLE program. As a member of NBME’s governing body, he strongly encouraged the use of medical schools strategically located throughout the nation and suggested that IU School of Medicine was ideally located to serve the Midwest.

NBME leadership agreed, recognizing several other factors that made IU School of Medicine an ideal test site: IU School of Medicine has the largest class size of any medical school in the nation so hundreds of its students needed immediate testing. A bonus—Wallach was already knowledgeable about the uniqueness of the USMLE program and was willing to quickly mobilize staff and resources to support USMLE’s needs.

“In about three weeks, we set up test centers throughout the country. It was really a herculean effort,” said Ken Ridgley, vice president of development for NBME. “It was impressive to see it come together with such urgency in such a short amount of time. This has really been an altruistic effort to help medical students at large.”

IU School of Medicine’s technology team, led by Executive Associate Dean and Chief Information Officer Rob Lowden, quickly prepared to host hundreds of medical students from throughout the region, working closely with Prometric, the commercial assessment contractor that has administered USMLE exams at its testing sites for years. Mike Dance, Educational Affairs Director for Operations, Finance and Administration, has served as the operations manager for the testing center, and James Lyons, Human Resource Business Partner for Educational Affairs, has managed staffing schedules. Director for IT Experience Patrick Phillips has led IT operations for Health Technology Services (HTS). Gabe Rios, director of the Ruth Lilly Medical Library, along with others on the library staff, has welcomed the USMLE regional testing center warmly.

A scheduling system developed by Jenny Weddle, business systems manager for Medical Student Education (MSE), has become a model of best practices for the other regional centers, and enables students from both IU School of Medicine and other medical schools to register for USMLE tests. Others on the Educational Affairs team serve at the testing site at Ruth Lilly Medical Library, greeting students, checking them in, verifying documentation and proctoring the test.

“It’s our people who are staffing it and our system that is scheduling it,” Wallach said. “Everybody has stepped up in a way that has made me very, very proud.”

MD candidates from 45 medical schools within a 400-mile radius of Indianapolis were invited to schedule USMLE tests at the medical library to help with Prometric’s backlog. About 60 percent of current examinees are from other medical schools. There are 50 seats available for each day of testing, making IU School of Medicine the largest of the school-based USMLE testing centers currently operating in the nation.

“The effort from Indiana University School of Medicine has been recognized among the other medical schools that have had students testing there,” said Michael Barone, MD, vice president for licensure programs for NBME. “Other Midwest schools are grateful and understand this is a large staff lift for IU School of Medicine on behalf of medical student education. The USMLE program is extremely grateful to IU School of Medicine for its help during this unprecedented time.”

Two steps of the USMLE exam are being administered at the testing site during a six-week period that runs through mid-July. Step 1, typically taken at the end of a medical student’s second year, assesses knowledge and application of the basic sciences which provide a foundation for the safe and competent practice of medicine. The Step 2 CK (Clinical Knowledge) test is taken when students are heading into their final year of medical school and assesses an examinee’s ability to apply medical knowledge, skills and understanding of clinical science for patient care, including emphasis on health promotion and disease prevention.

This was the step Ryan Smith, a fourth-year medical student at IU School of Medicine, needed to complete. His exam was originally scheduled in April, but Prometric rescheduled it twice due to COVID-19. Smith was scheduled to take the Step 2 CK test in late June at a testing center in Cincinnati when he learned testing would be offered on his home campus. He was able to avoid traveling and complete what he considers “the last major hurdle for medical school” on June 6, relaxed by a familiar environment.

“Seeing the familiar faces of staff in the morning welcoming us was stress relieving,” Smith recalled.

Educational Affairs and library staff have strived to create a friendly and relaxing atmosphere for nervous medical students, while also adhering to USMLE’s strict testing standards and proctoring protocol. The medical library’s recently remodeled lounge is open for breaks and stocked with snacks and beverages, offering a bit of “Hoosier hospitality.”

“We’ve been trying to give the students a really great experience and provide a high level of customer service,” said Emily Laughlin, who provides administrative support for Student Affairs.

For medical students, testing day is a rigorous, nine-hour process. Because of the pandemic, examinees are required to wear masks and maintain social distancing.

“It’s a long day,” noted Smith, who is relieved this important exam is now behind him. “The stress is somewhat physical, not just mental. It was such a blessing to take the test in Indy and not have to drive an hour and a half and stay in a hotel.”