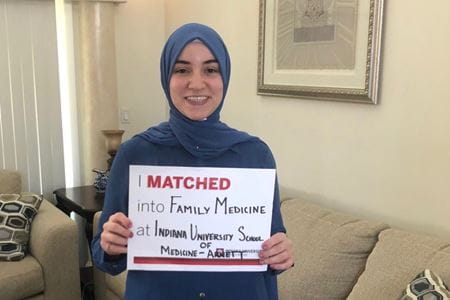 The words “family medicine” to me hold a warmth and sense of security in their representation. They have an inherent message, “I will care for your family,” in such a way that “family” could mean one’s child, parent, sibling, or community. I see this as both an honor and a responsibility. While family medicine can be viewed as a melting pot of many specialties—and by extension, the patient seen as a compilation of all the organ systems—family medicine to me is much more; there is a definite holistic aspect to family medicine that includes the patient’s role in his or her life and society—the social determinants of health.

On May 14, 2021, Leena Aljobeh will officially become Leena Aljobeh, MD. The next step in her journey as a physician is residency training at IU Health Arnett Hospital in Lafayette, Indiana, where she will hone her skills in family medicine.

Aljobeh is among 140 members of the IU School of Medicine Class of 2021—more than 40 percent of this year's graduates—who are going into primary care specialties, filling a great need. The latest data from the Association of American Medical Colleges (AAMC) confirms projections for a substantial shortfall of primary care physicians nationwide.

By 2033, the AAMC predicts demand will outpace supply leaving a deficit of 21,400 to 55,200 primary care physicians needed to address a growing and aging population. With much-needed efforts underway to elevate health care for underserved populations, the demand could be even greater. 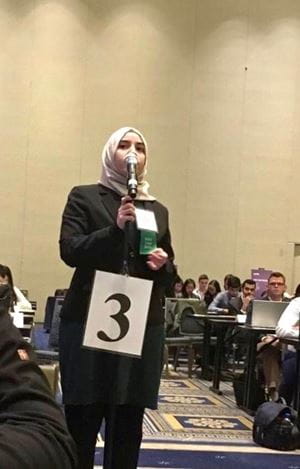 For Aljobeh, plugging into her community and contributing to its improvement in health, wellness and education is a lifestyle which started even before she entered medical school. As an undergraduate, she worked at a daycare and shadowed a family physician in a Federally Qualified Health Clinic (FQHC) serving many of the same families.

Her calling as a primary care physician was solidified during her time at IU School of Medicine, shaped largely by her numerous volunteer experiences. As co-chair for medical service learning on the Northwest-Gary campus, Aljobeh mobilized student volunteers for Habitat for Humanity, organized community health screenings and initiated a program aimed at inspiring school-aged children to pursue careers in science and medicine. She also served on a community host board for Remote Area Medical, a national non-profit that helps medically underserved communities establish free, mobile medical clinics.

Additionally, Aljobeh was student chair of the American Medical Association (AMA) Community Service Committee, and she co-authored a policy on body donation regulations which was adopted by the AMA in 2018. During her last two years of medical school, Aljobeh was an AHEC Scholar with the national Area Health Education Centers (AHEC) organization, leading an effort to establish free COVID testing sites at homeless shelters in Gary, Indiana.

“I want to work with social determinants of health and work with underserved patients, and I felt family medicine is where I could tie it all together to work with both kids and adults at the social need level,” Aljobeh said. “I love that continuity of care.” 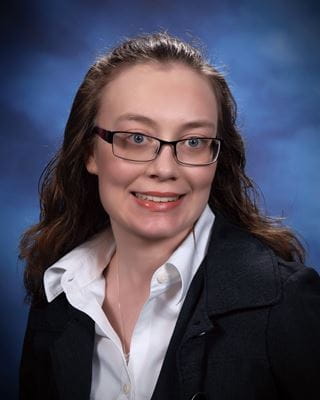 Like Aljobeh, Cally Miller fell in love with family medicine early. During high school, Miller shadowed a small-town family physician in Wakarusa, Indiana, an experience that would anchor her career aspirations.

“His name was Dr. Robert Abel, and I thought he was just the coolest. He practiced until he was 92—all the way up to six weeks before he passed. He delivered like 10,000 babies and did just about everything,” Miller said.

Now graduating with her MD from IU School of Medicine, Miller is eager to begin residency training in family medicine at Community Hospital East in Indianapolis.

Because Miller knew going into medical school that she wanted to be a family physician, she applied for the Indiana Primary Care Scholarship, a program established by the state in 1993 to increase the number of practicing primary care physicians within Indiana’s medically underserved areas. The scholarship pays for in-state tuition at IU School of Medicine, and the recipient agrees to practice full-time primary care in an Indiana medically underserved community for at least four years following residency.

Since its inception, 276 IU School of Medicine students have been awarded this scholarship, making a commitment to become the primary medical contact for many Hoosiers in need of care.

“It makes me so happy to see graduates who choose to stay in Indiana to work in primary care and who are dedicated to serving the medically underserved,” said Kelly Matthews, a lead advisor at IU School of Medicine-Indianapolis. “There is such a need for quality primary care physicians, and it’s nice to know we have exceptional and committed physicians in the pipeline who will care for our families, friends, neighbors and fellow Indiana residents!”

Miller’s desire to care for medically underserved communities grew through her experiences at IU School of Medicine. She served as chair and lab coordinator of the student-run, free clinic on the Terre Haute campus, where she studied in the rural medicine program. Miller was recognized with a campus leadership award and was inducted into the Gold Humanism Honor Society for modeling excellence, compassion and altruism.

“I really liked what the clinic was doing for the community. They were filling a gap for people who couldn’t afford to buy their own insurance but made too much money for Medicaid,” Miller said. “They’re stuck in a donut hole. I’ve had several close family members who experienced that, so I enjoyed giving back to people who were in that situation.”

Caring for the medically underserved 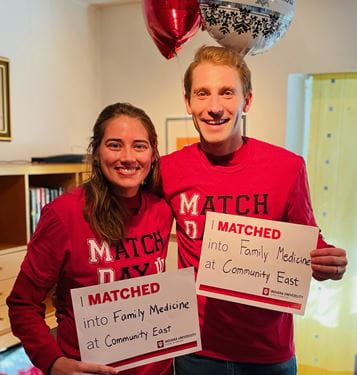 Joining Miller in family medicine residencies at Community Hospital East, Kristen Swanson and Petr Sliva had their own reasons for choosing to stay in Indiana. The married couple has been together since high school and has been closely connected to the disabled community in Indianapolis, volunteering as coaches with Special Olympics.

“That community is definitely underserved in the health care system, and a lot of people are not comfortable working with individuals with disabilities,” Swanson said.

Sliva’s brother, Tommy, has Down syndrome and has qualified to compete in skiing at the Special Olympics World Winter Games in Kazan, Russia, in 2022. When he’s not training and competing in sports, Tommy works as a supply technician at Community Hospital North in Indianapolis. As a resident with Community East, Sliva will have some rotations at Community North and looks forward to seeing his brother at work.

While Sliva and Swanson are eager to provide medical care to the local disabled community, they also want to work with other underserved populations.

“I would like to work with immigrant and refugee populations,” said Sliva, whose family immigrated from the Czech Republic to Sweden and subsequently to the United States when he was a toddler. “Immigrants are treated very differently based on where they come from. I was never questioned about why my family came to the United States, but many other families are questioned, and many individuals are not given the chance to experience the American dream like my family.” 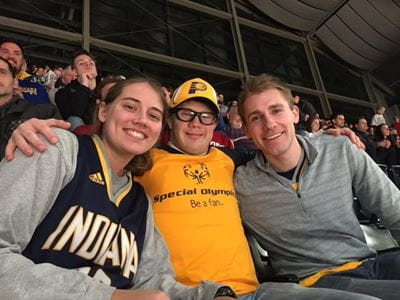 During their time at IU School of Medicine, Sliva and Swanson both served on the executive board for the Family Medicine Student Interest Group, which led to involvement in the Indiana Academy of Family Physicians as student delegates, helping them make valuable professional connections. They also learned how to become advocates.

“Working with the Indiana Academy of Family Physicians taught us how to talk to legislators and stand up for our patients,” said Swanson, who additionally served as co-president of the Medical Students for Choice student interest group at IU School of Medicine.

Sliva served as president of the Community Leadership Mentoring Program, which connects medical students with local charitable organizations, preparing them to serve as physician representatives on non-profit boards.

With so many local connections, Sliva and Swanson were thrilled to match to a family medicine residency in Indianapolis.

Indiana Primary Care Scholar Sarah Olson is heading to the Medical University of South Carolina for a residency in pediatric primary care; however, she knows she will return to practice medicine in Indiana.

“There is a significant medically underserved population in Indiana, and I feel passionately about using my skills where they are most needed. Giving back to these populations in my home state has always been my dream,” said Olson, who has particular interest in working with Spanish-speaking families.

“Language can be such a barrier to safe and efficient medical care. Although interpreters are vital and serve an incredible role, having direct communication with patients is always the most ideal for optimal care and developing trust,” Olson said.

She envisions working in a clinic serving the Hispanic and Latino population.

“I have a passion for recognizing and improving social determinants of health in pediatric populations so that children are given the best chance at a healthy, successful life from the beginning,” Olson said. “I also have a passion for global health and would love to participate in medical brigade trips in Spanish-speaking countries throughout my career.”

Promoting wellness for all Hoosiers 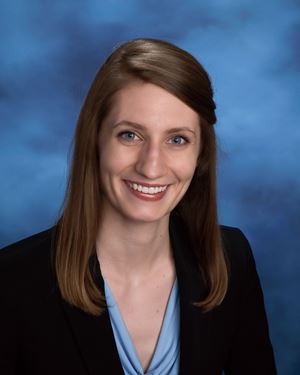 Emily Hentz shares Olson’s passion for providing quality care to the Spanish-speaking community in Indiana. She served as president of the Medical Spanish Student Interest Group and was a physical wellness and mental health advocate, serving on IU School of Medicine’s Wellness Coalition. Her community outreach efforts included public health research with fieldwork checking lead levels in soil in an Indianapolis community.

“Emily is certainly an advocate for her patients. This is evidenced by her comments from clerkships as well as her devotion to serving patients outside of her academic requirements, including her role as education empowerment volunteer at the IU Student Outreach Clinic,” said Matthews, Hentz’s lead advisor at IU School of Medicine.

Hentz was nominated by her peers for induction into the Gold Humanism Honor Society, and like Sliva, she is interested in working with recent immigrants living in the Indianapolis area.

“These groups face so many challenges, and I hope to alleviate some of those by making access to bilingual providers easier and working with public health outreach,” said Hentz, who spent a year prior to entering medical school in Queretaro, Mexico, working as an English teaching assistant through a Fulbright grant.

At IU School of Medicine, she focused on her medical Spanish skills, training under Javier Sevilla-Martir, MD and Ruben Hernandez, MD.

“Doing my family medicine rotation with them really allowed me to use Spanish in a practical setting. They have been incredible mentors,” Hentz said.

After graduation, Hentz will be staying at IU School of Medicine to complete a combined residency program in internal medicine and pediatrics.

“I knew I wanted to do primary care but had trouble deciding between caring for adults or children. Ultimately, I chose both!” Hentz said. “I hope to eventually practice both primary care and obesity medicine. I have always been interested in nutrition, and with so many families struggling with obesity, I am determined to help provide support in their journeys.”