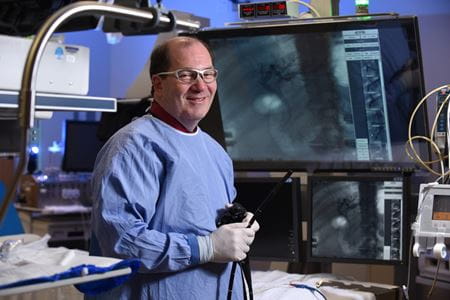 The recent announcement by longtime “Jeopardy!” host Alex Trebek that he has stage 4 pancreatic cancer has placed the disease squarely in the spotlight for many Americans. A fixture in living rooms across the country, the game show host is one of about 1.6 percent of Americans who will be diagnosed with pancreatic cancer in their lifetimes, according to the National Cancer Institute.

Of those diagnosed, only 8.5 percent of patients survive five years. At Indiana University School of Medicine, Evan Fogel, MD, is interested in improving screenings for pancreatic cancer, which is the fourth leading cause of cancer death.

Fogel is professor of medicine in the Division of Gastroenterology and Hepatology at IU School of Medicine and a member of the ERCP (endoscopic retrograde cholangiopancreatography) team, which has been recognized by the National Pancreas Foundation for its multidisciplinary approach to the treatment of pancreatic disease.

IU School Medicine gastroenterologists and surgeons lead the nation in volume of both endoscopic pancreatic procedures and pancreatic surgeries.

The pancreas has many different types of cells, each of which can produce a different type of malignant tumor. The most common type arises from the cells that line the ducts of the pancreas and is called pancreatic ductal adenocarcinoma. In many cases, pancreatic cancer spreads to nearby or distant organs.

Due to several factors including an absence of early symptoms, pancreatic cancer often goes undiagnosed until it is advanced, which greatly reduces treatment options, said Fogel, also a member of the IU Simon Cancer Center.

“Chemotherapy slows the progression of the disease, but it is not a cure. The only potential cure for pancreatic cancer is surgery and 85 percent of patients are not candidates for surgery because the cancer has already spread,” Fogel said.

Patients with pancreatic cancer often see a doctor with reports of pain in the upper abdomen or back, loss of appetite or unintended weight loss, new-onset diabetes, fatigue, jaundice or depression.

Diagnostic screening methods are not foolproof. Blood tests can be normal. CT scans and MRI scans also can miss small tumors. It is very difficult to diagnose in the early stages, Fogel explained.

Researchers continue to seek more reliable tools for diagnosing pancreatitis and pancreatic cancer earlier. Fogel speaks with optimism when discussing the National Institutes of Health-sponsored Consortium for the Study of Chronic Pancreatitis, Diabetes and Pancreatic Cancer (CPDPC). Fogel leads IU School of Medicine’s association with the group of only 10 member institutions.

“The only way to beat pancreatic cancer is to diagnosis it earlier,” Fogel said.

At IU, scientists are involved with the four primary clinical studies funded by the National Institutes of Health, the sponsor of the consortium, as well as several other ancillary studies. These clinical studies are taking place at multiple centers, which allows for more people with a greater genetic diversity to participate and provides researchers with broader data.

Each of the four consortium studies takes a different approach to identifying biomarkers that can be linked to pancreatic cancer or pancreatitis. Combined the studies will enroll thousands of patients and follow some of them for two decades, a rare occurrence in clinical research. The biological samples collected from patients will be frozen so as science advances and new tests are developed, the samples can be examined in hopes they reveal additional information.