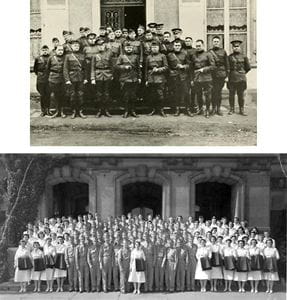 In 1908, E.D. Clark, who previously was associated with the Indiana Medical College, was one of a committee of eight who organized the surgical department of the newly established IU School of Medicine.  In 1910, Clark was named secretary and Professor of Surgery at IU School of Medicine.  On June 14, 1917, Clark (Major Clark) was appointed director of the Lilly Base Hospital, officially known as United States Army Base Hospital No. 32, and supervised the organization work of this unit as the hospital prepared for overseas duty.  Clark served Base Hospital No. 32 first as Chief of the Surgical Service and then as commanding officer of the unit.

Over its year of active service through 1918 and into the beginning of 1919, Base Hospital 32 admitted 8,506 Americans, 1,003 Allies, and 189 Germans totaling 9,698 admitted patients representing 35 different nationalities and every U.S. state except for Nevada.

The most common ailments treated were injuries from shrapnel and mustard gas, as well as influenza and diseases caused by the unsanitary conditions that plagued the trenches such as Vincent’s angina, or ‘trench mouth’.  Of these patients, 118 would not survive.  While the hospital’s mortality rate of 1.22% was later considered by Clark as “average”, the hospital’s record was acclaimed by many.  Colonel S. H. Wadhams, in charge of the medical department of the American Expeditionary Forces, praised Base Hospital 32 as “one of the best in France.” For his services, Clark was cited by the French government and received a personal citation from General John J. Pershing.

Clark, Indiana’s acknowledged leader in surgery for four decades, was president of the Indiana State Medical Association in 1937.  He died at age 68 on February 16, 1938, from pneumonia.

C.J. Clark was a clinical professor of cardiology and chairman of the post-graduate education program at IU School of Medicine. Clark graduated from IU School of Medicine in 1923.  Of note, E.D. Clark was on faculty at that time and C.J. Clark’s fellow classmates included Charles F. Thompson, M.D., who later joined him to organize the WWII Army Base Hospital, and Harold M. Trusler, M.D., who went on to a legendary career in Plastic Surgery at Riley Hospital for Children.  Beginning in 1933 and until his death, C.J. Clark was active with the Indiana State Medical Association as chairman of many committees and sections.  Elected to the Association’s Executive Committee in 1950, he was named Chairman in 1951.  His noteworthy accomplishments included service on an Association committee that established the Blue Shield Plan across Indiana.

A specialist in internal medicine, Clark (Colonel Clark) commanded the 32nd General Hospital unit sponsored by the IU Medical Center during World War II and served with the unit in Europe.  The 32nd General Hospital began when Willis D. Gatch, MD, third dean of IU School of Medicine, asked Clark and Thompson to organize a hospital unit late in 1941. On 13 May, 1942, 47 doctors and dentists and 72 nurses were formally inducted into the United States Army during a special convocation held on the grounds of the IU Medical Center in Indianapolis.

When the unit officially activated on January 15, 1943, Lt. Colonel C.J. Clark was named chief of medical services and Lt. Col. Charles F. Thompson became chief of surgical service.  After training at Camp Bowie near Brownwood, Texas until August 1943, the outfit received orders to move to England where Clark assumed command of the 32nd General Hospital on January 31, 1944.

The 32nd General Hospital shipped out for France in July 1944 and was the first Allied general hospital to arrive in France after the D-Day landings. Stationed at La Haye du Puits in Normandy, the unit cared for 5,350 patients between August 17 and November 22, 1944. The 32nd was then placed on inactive status and transferred to Belgium until early 1945 where the unit became the first U.S. Army general hospital stationed in Germany when it moved into a civilian hospital in Aachen, Germany. From March 5 to July 30, 1945, the hospital treated 41,797 patients.  The 32nd General Hospital was officially deactivated in late October 1945.

Clark died on January 22, 1953 from injuries sustained in a car crash near Westfield, Indiana.  He was returning to his Carmel, Indiana home after making house calls and lost control of his car after a tire blew out.

Ashley Dummer is a Communications Specialist in the Department of Pediatrics. She has worked in Pediatrics since graduating with her degree from Indiana University.