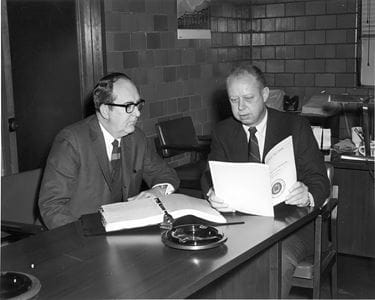 Glenn W. Irwin, MD, then dean of IU School of Medicine, consults with Dr. Lukemeyer during a meeting in 1970.

If you earned your medical degree from the Indiana University School of Medicine in the last half century, there’s a good chance George T. Lukemeyer, MD, had something to do with it—even if you don’t know it.

Dr. Lukemeyer—“Luke” to friends—joined the school’s faculty in 1954 and rapidly rose through the ranks, eventually overseeing the administration of IU and Riley hospitals as the school’s executive associate dean.

But for all his wide-ranging responsibilities, it may well have been through one position that he had the greatest impact. From 1960 until this past May, Dr. Lukemeyer served on the admissions committee, which considers all candidates to the School of Medicine and decides their fate.

During his tenure, including 18 years as chairman, he and his colleagues waded through countless applications and granted admission to thousands of future physicians. He interviewed many of those students himself, trying to discern who had the right blend of intelligence, integrity and compassion to grow into a good doctor.

All the while, he somehow managed to make the high-stakes admissions process a little less stressful for those who encountered him.

“I was extremely nervous before my interview,” recalls Kambiz Karimi, MD, a member of the Class of 1981 who is now an internist in Kokomo, Indiana. “Dr. Lukemeyer put me at ease right away. I felt like I was talking to someone who had my best interests in mind. I relaxed and that interview became the highlight of my life. It was so wonderful.”

For Dr. Lukemeyer, such interactions with aspiring physicians were a motivation, and one of the reasons he continued to serve on the admissions committee for some 18 years after he retired from the full-time faculty.

Aside from examining obvious factors such as grades and test scores, Dr. Lukemeyer would try to get to know the young men and women who came before him. He talked to would-be physicians about their interest in medicine and forced them to look ahead to where they’d like to be in 10 or 15 years. Along the way, he had students open up about overcoming difficult home lives and learned about others who worked long hours to put themselves through college.

He’d also take note of less obvious indicators of character, like the quality of a student’s handshake and whether someone looked him in the eye when he or she spoke. And he’d ask around in the admissions office, inquiring about who was friendly to staff members and who was a bit too aggressive.

That ability to look beyond numbers made all the difference to some applicants.

Steven Scott, MD, is the first to admit he wasn’t the best student during his freshman and sophomore years at Indiana University in Bloomington, earning a C- average during that time. But when he decided he wanted to be a doctor, he threw himself into achieving that goal.

Despite near-perfect grades his junior and senior years, his early performance remained a blemish on his transcript, and he knew that getting accepted to medical school would not be easy. His best bet, he decided, was to make a personal appeal.

“I would go and ask to visit with Dr. Lukemeyer, who was kind enough to see me,” Dr. Scott says. “He probably doesn’t remember but he saw me five times. He would say, ‘Steve, you just didn’t do well.’ I’d say, ‘I know, but I’ve really been trying.’ He would say, ‘I can see that. I want you to keep trying.’”

Dr. Scott did just that, and his acceptance letter arrived in the mail on July 7, 1970. He graduated from the School of Medicine in 1974 and now runs a successful health care company in the Southeast. Dr. Scott says he never could have gotten where he is today without Dr. Lukemeyer.

“He was just a very wonderful person,” he says. “He probably remembers very little of it, but to a kid from a single mother— no one had gone to college from my clan— this was the biggest thing that ever happened in my life. I’ll always remember his kindness and intelligence.”

In many ways, Dr. Lukemeyer was destined to end up in medicine. His father and grandfather were both doctors who practiced respectively in Huntingburg and Jasper, Indiana, so it seemed only natural that he would follow them into the field. He graduated from the IU School of Medicine in 1947 and initially assumed that he, too, would enter private practice, but he was drawn to academic medicine by mentors like J.O. Ritchey, a School of Medicine legend whom he later served alongside on the admissions committee.

While he is well-known for his role on that board, he also made significant contributions to research, patient care and medical education. As a young faculty member, Dr. Lukemeyer established the school’s first kidney dialysis unit. And he solidified his reputation as someone who would take time to work with students.

Joe Noble, MD, a 1964 graduate, recalls how he and a group of classmates asked Dr. Lukemeyer to meet with them in the evenings to review material when they were second-year students. The lessons learned during those ad-hoc sessions never faded.

“I remember presenting a brilliant review of the literature on hypertension—brilliant in my mind,” Dr. Noble says. “He quickly informed me that even though it was accurate it was based on throw-away medical journals that had no scientific validity whatsoever. I’ve never made that mistake again.”

“He’s just the model physician and he influenced hundreds of medical students in a very positive way,” adds Dr. Noble, an Indianapolis cardiologist who Dr. Lukemeyer is now proud to say takes care of him.

These days, Dr. Lukemeyer and his wife, Barbara, who have a son and daughter, enjoy spending time with their grandkids and like to cheer them on at various sporting events. They also pass their time in the summer with family at a cottage on Lake Wawasee and are avid fans of the IU Hoosiers and the Indianapolis Colts.

Though he is no longer directly involved with the admissions process, the Lukemeyer name will forever be associated with excellence in medical education at Indiana University. The endowed Frank C. and Ruby L. Moore and George T. Lukemeyer Professorship was established to benefit the School of Medicine, with the expectation that the holder be the chairman of the admissions committee.

In addition, two endowed scholarships exist that bear his name: The Class of 1970 David M. Gibson and George T. Lukemeyer Scholarship, and the George T. Lukemeyer Medical Student Scholarship. As a result of the generosity of many donors who contributed to these funds, a total of $24,500 in financial aid has been awarded to student recipients this year alone.

It is a fitting way to honor someone who has given so much to the School of Medicine, and who cared so deeply about the success of students.

“My occupation and my avocation centered around the School of Medicine,” Dr. Lukemeyer says. “I have to confess, I miss it.”

The feeling, of course, is mutual.