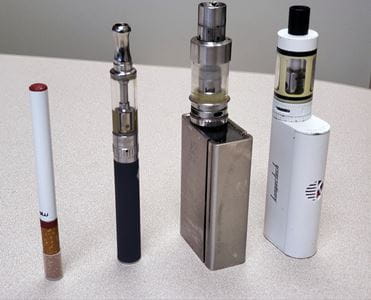 What are e-cigarettes and vaping? How long have they been on the market?

E-cigs hit the U.S. market in 2007. An e-cigarette is an electronic device that aerosolizes a liquid that is then inhaled. Technically, all these devices are called Electronic Nicotine Delivery Systems (ENDS), and they come in many different sizes and shapes, refillable versus pre-filled, and rechargeable versus one-time use. There are electronic vape pens, electronic hookahs, electronic pipes, electronic tanks/mods, and more. Often the liquid, also known as e-liquid or e-juice, contains nicotine from the tobacco plant. In addition, this liquid contains a number of other compounds, however, the nicotine is the same nicotine found in cigarettes and is just as addictive. Some of these devices are similar in size and shape to a cigarette, however, some are much larger and hold more liquid for longer vaping sessions.

Are e-cigarettes a product tobacco smokers use to wean themselves off cigarettes and cigars?

While many people believe these products are an appropriate way to quit, these devices are a tobacco product. They are not FDA approved as a cessation aid. Current data indicates that the majority of people who use them are dual using, meaning they continue to use traditional combustible cigarettes in addition to vaping.

Is vaping safer than smoking cigarettes?

Since these devices have only been on the market since 2007, long-term data is not available to show conclusive evidence of health effects. However, some inferences can be drawn since data exists for some of the common compounds in these devices and the e-liquid. Typically, e-liquid formulations contain nicotine, flavoring agents, water, glycerin and propylene glycol.

It is well documented that many of the flavoring agents cause a serious chronic lung disease, commonly known as popcorn lung. Research has shown that some compounds, such as formaldehyde and acrolein found in combustible cigarettes, are also found in the newer generation devices, as well as other substances such as plastics, rubber, foam and heavy metals. In addition, one serious concern is that nicotine is often found in the e-liquids, even if the label says 0 mg of nicotine. Independent lab tests of vials of e-liquid have found the nicotine concentration has been different from what is stated on the label in 70 percent of the products tested.

In January 2018, the National Academy of Sciences released the Public Health Consequences of E-Cigarettes report. In that report, they drew some conclusions based on the limited amount of data currently available. Essentially, the report stated that there might be some short-term benefits to e-cigs if cigarette smokers switch to using only an e-cigarette for a “limited time and then quit using both cigarettes and e-cigarettes.” They also stated, e-cigarettes “cannot be simply categorized as either beneficial or harmful to health” because longer-term data is needed.

Why is there so much concern about teens using e-cigarettes? Are e-cigarettes more harmful for young people than for adults?

An FDA report states: “Nicotine disrupts the formation of brain circuits that control learning, attention and susceptibility to addiction. It has also been determined that teens that use e-cigarettes are four times more likely to switch to combustible cigarettes.”

Should parents and physicians be concerned about the number of teens and young adults who are vaping and why?

There are several reasons, including the effect nicotine has on the developing brain and the fact many of the products popular among teens contain as much as 40 percent more nicotine than combustible cigarettes, which results in a more severe nicotine addiction. Currently, there are more teens using e-cigarettes than cigarettes, which means the industry is creating another generation of people addicted to tobacco and dying from tobacco-related disease.

What is the FDA doing to reverse the trend?

Teens are not buying the tobacco-flavored e-cigarettes so the FDA has plans to restrict the flavorings of e-cigarettes that most appeal to young people. The FDA also has put retailers and online sales sites on notice that they must develop ways to ensure that those purchasing the products are of legal age in the state where they reside. The legal age in Indiana remains 18, but some states have increased the legal limit to 21.

There are several manufacturers but one, Juul, has been in the news more frequently. Why?

Juul has come under scrutiny for advertising that is especially attractive to youth and flavors that are especially appealing to younger tastes. Its product also contains more nicotine than most other brands, and looks like a USB drive/flash drive so many teachers and parents do not realize it is a tobacco product.

How do the different e-cigarette products vary?

There are approximately 450 different brands; however, there are only three categories of products.

What suggestions do you have on how people can break the addiction of vaping? Has any research been done as there has been for smoking cessation techniques?

If people use an e-liquid with nicotine it is definitely habit-forming — more accurately, addictive. There has not been research on effective cessation strategies for vaping as there has been for smoking. While the behavior of vaping is slightly different, the physical addiction to nicotine is the same. Therefore, the same treatment strategies should be effective. Evidence-based strategies include the seven FDA- approved medications or even a combination of medications. These medications include the nicotine patch, gum or lozenge in addition to Bupropion (Wellbutrin) and Varenicline (Chantix). Other strategies include cognitive and behavioral counseling. It has been well documented that either medication or counseling alone increases quit rates, however, when counseling and medications are combined quit rates are significantly enhanced.