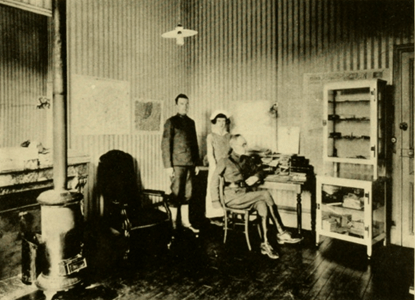 Major Lafayette Page, MD commanded the Nose, Throat and Ear Department at Base Hospital 32 in France during WWI.

Major Lafayette Page, MD commanded the Nose, Throat and Ear Department at Base Hospital 32 in France during WWI.

Some Indiana University School of Medicine (IUSM) faculty will tell you straight-faced over morning coffee shop tall tales storytelling that if you want to know more about World War I (1914-1918), just ask me, I was “over there.” While that’s not true (at least today), what I can tell you about is Dr. Lafayette Page, an eminent otolaryngologist and professor of the IU School of Medicine, who was a great IUSM hero of WWI and visionary physician leader.

He was already a hero in my book when Dr. Page presented the idea of a children’s hospital for the James Whitcomb Riley Memorial Committee to consider as a way to honor the famed Hoosier poet who died on July 22, 1916.  Dr. Page’s idea of a children’s hospital captured the imaginations and enthusiasm of the Committee in the summer of 1917, only months after the United States entered WWI.

Future action on a children’s hospital idea was outlined and postponed until after WWI at a meeting that Dr. Page and other organizers of the James Whitcomb Riley Memorial Association (today, the Riley Children’s Foundation) convened in August 1917. After completing three months of military training, Dr. Page and other IUSM physician leaders sailed off in early December 1917 to Contrexeville, France for service at the Colonel Eli Lilly Memorial Red Cross Hospital, also known as Base Hospital 32.

Dr. Page (now, Major Page) was in charge of the Nose, Throat, and Ear Department at Base Hospital 32, where he worked with nurse Maude Frances Essig, who described his treatment of soldiers suffering from poisonous gas inhalation:

The English treated these cases with oxygen and benzoin steam inhalations, but an otolaryngologist at Base Hospital 32, Major Lafayette Page, rejected this treatment. He believed that the oxygen was unnecessary and that the steam merely soaked the tissues. He realized that in order for recovery and healing to take place it was necessary for the injured tissue debris to be removed from the lungs, primarily through the natural cough reflex. He therefore devised a mixture of guiacol, camphor, menthol, and oil of thyme and eucalyptus that was introduced into the trachea through a syringe. When it reached the bronchi, it caused coughing to expel the products of inflammation and suppuration. The patient received immediate relief, breathing was facilitated, pain reduced, and healing begun.

Dr. Page reported his treatment in the literature (see:  Lafayette Page, M.D., “Effects of Intratracheal Medication of Gas Burns of the Respiratory Tract,” Jour. A.M.A., Vol. 79, No. 4, July 22, 1922, pp. 259-261).  After WWI, Dr. Page reported for duty on the IUSM home front.  He and other members of the James Whitcomb Riley Memorial Association (Dr. Page was an Incorporator) joined with Indiana University to build the James Whitcomb Riley Hospital for Children in 1924 as an addition to the 1914 Robert W. Long Hospital the new 1919 IUSM building (now Emerson Hall). He also helped supervise medical care of patients at Riley Hospital for Children during its early days. Dr. Page was awarded an Honorary Doctorate of Laws by Indiana University President, William Lowe Bryan, PhD, shortly before he died in 1929.

I salute Dr. Page for his enduring example as a physician leader not only for what he did on the battlefields of WWI but for what he accomplished to help build the future of the IUSM.