'Able to hear them, to see them': Medical student draws on her personal experience with cancer to care for others 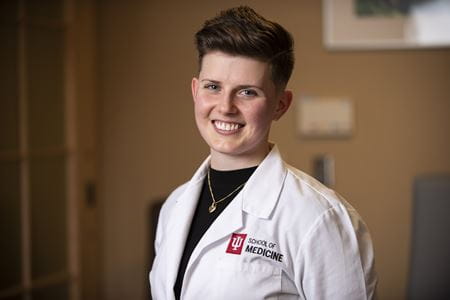 In the first month of the first year of medical school at Indiana University School of Medicine, Sandi Jones walked into a room where a patient with advanced cancer waited.

“I was so nervous going into that room—for him, for his wife, for me as someone who could go back into having a PTSD relapse,” Jones said. “And it didn’t happen. And the next patient I saw, I was able to hear them, to see them, as a person.”

Jones knows better than most what it feels like to receive a life-changing diagnosis. This Christmas Eve, she will celebrate her six-year survivorship from acute myeloid leukemia. And now, as a third-year medical student in the Class of 2021 with aspirations to become an oncologist, she can sit beside a patient and offer true understanding in a space where few have traveled or can comprehend.

Inspired to ‘do something’ for cancer patients

Years before her initial diagnosis, however, Jones knew that she wanted to become a doctor. In high school, she showed a strong aptitude for science but wasn’t sure how to apply it. That changed when her mother, who passed down her strength and toughness to Jones, was diagnosed with and survived melanoma.

Jones initially felt the helplessness that can accompany bearing witness to a loved one’s cancer diagnosis. Then her attitude shifted. “I came to the conclusion that I can do something with this,” she said. “I am good at this. I don’t want to be hopeless. I don’t want cancer to be a thing that patients have to live with and for me to be unable to do something for people like my mom.”

Jones, who is acutely analytical and purposeful, had a plan. She pursued a degree in biology with a minor in chemistry at Indiana University in Bloomington, Indiana, and shadowed a primary care doctor in the summer between freshman and sophomore years. After helping with a precancerous mole excision, the die was cast, “I told myself, ‘It’s done. Whatever I need to do to make that happen, it’s happening. I’m going to be a doctor,’” she said.

Then in the fall of 2013, Jones, who was halfway through her junior year, started noticing that she was bruising easily and losing her attention span. On Thanksgiving break, her mother noted her paleness, and Jones scheduled an appointment to test for anemia once final exams ended. That Christmas Eve, she and her mother were called into the doctor and received the news: She had acute myeloid leukemia, an often-deadly disease that demands rapid treatment.

“My initial concern was, ‘Oh no, I’m not going to graduate on time,’ as a way of self-preservation from the realization that my life was in danger,” Jones said.

Jones with her dad during her first round of chemotherapy.

Jones initially had a good prognosis. Following chemotherapy, she went into remission in August of 2014. But she relapsed within six months. This time, the cancer had acquired new and worse mutations, revealed through genetic testing of her cancerous cells.

Turning to IU for care

While undergoing a second round of therapy in January 2015, she was referred to Jennifer Schwartz, MD, a hematologist at the Indiana University Melvin and Bren Simon Cancer Center, an assistant dean for medical student education, and an assistant professor of clinical medicine at IU School of Medicine. Schwartz would play a large role in Jones’s bone marrow transplant and subsequent care.

When Schwartz first met Jones, she was struck by her maturity and fierce independence.

“Sandi was wise beyond her years,” Schwartz said. “She asked such insightful questions. She wanted to make sure that I understood where she was coming from, and her commitment, which is really remarkable for someone of that age. You could see her drive and her strength.”

“You don’t want the disease to come back, and the donor immune system helps to fight the disease beyond the chemotherapy patients receive,” Schwartz said.

Because of the need to find marrow that her body would not reject, Jones had to wait for a match. Her twin brother, Alex Jones, did not match, nor did any other family members.

On the edge of life and death

As she underwent chemotherapy one day while awaiting transplant, Jones began to develop a fever. In a few hours, her temperature skyrocketed to nearly 106 degrees, and her body began to shut down. Jones, who had developed a severe infection due to her weakened immune system, coded and nearly died. She was admitted to the intensive care unit (ICU) and sedated for two weeks, teetering on the edge of life and death.

“You have to understand that the ICU has patients who are the sickest of the sick,” said Schwartz. “Having to come to grips with your own mortality is a lot to take in and to overcome, and Sandi did it with aplomb.”

Due to the length of the sedation and time on a ventilator, Jones had to recover from withdrawal from the many medications given to keep her alive. She ultimately had to regain strength to sit, stand, walk, talk and eat again. She doesn’t remember much from that time, having pieced her experience in the ICU together from her charts and conversations with care providers.

One of Jones’s first cogent memories occurred nearly a month after being admitted. Laying in her bed, she suddenly sat up, looked at her mother sitting beside her and said, “I want to go for a walk.” These were some of the first words she had spoken during recovery. She hit the nurse call button and went for five walks that day.

Incredibly, Jones was discharged four days later and rapidly regained strength. Five weeks later, the donor registry identified a match for her bone marrow transplant. On June 2, 2015, she underwent a successful procedure that saved her life, overseen by Schwartz. The aftermath of overhauling the immune system and recovering from her time in the hospital required a new reality including careful monitoring and around 10 medications a day taken at specific times.

In addition to the significant physical challenges she faced, Jones also had to reassess her longstanding goal to become a doctor. “For a while, when things were really hard, and my life was teetering on the edge of being over, even when I had the opportunity to entertain long-term plans, I was nervous that I couldn’t do this. I was really nervous that I couldn’t physically do it. And I was nervous that all the things that I had gone through in that time were going to make it so I couldn’t treat somebody. I would be too invested,” Jones said.

Forging past these significant hurdles and recognizing that practicing medicine fulfilled a need in her, Jones applied and was admitted to Indiana University School of Medicine, showing determination to stay on the path she started at 15. “Ultimately, I knew that I didn’t have a passion for anything the same way. And through hell or high water I was going to try to get it. And if I did, I did, and if I didn’t, I’d try again,” Jones said.

Having gained wisdom from her experience as patient who had been to the edge and back, Jones could circle back, guiding others traversing a similar journey. And she wasn’t alone. Joining her would be her twin brother, Jones, a third-year medical student at the time at Indiana University School of Medicine, and Schwartz.

From physician to mentor

Jones at her 2017 White Coat Ceremony with her twin brother, Alex, a third-year medical student at the time.

Jones’s family and Schwartz attended her White Coat Ceremony in 2017, a rite of passage ushering students into their medical training.

“Okay, I cried a little bit at the white coat. I was so overjoyed to see her achieve her goal,” Schwartz said. Her role as Jones’s physician could now be expanded to include mentor.

After her experience as a two-time leukemia survivor and bone marrow transplant recipient, Jones looks up to Schwartz, and wants to emulate her as she pursues oncology.

“She’s the most incredible doctor I’ve ever had,” Jones said. “She is the standard I will hold myself up to when I enter my own career. Her capacity to build rapport and advocate for patients’ needs and desires is unlike any other physician I’ve known.”

Jones is now a third-year medical student and active community volunteer. She has embraced her time at medical school, having received a Cancer in the Under-Privileged, Indigent, or Disadvantaged (CUPID)Translational Oncology Fellowship. In 2018, Jones and other fellows lobbied on behalf of a United States Senate bill that impacts long-term care plans for individuals with cancer, reinforcing her commitment to serve as an advocate for her future patients and her community.

She was also honored with the Indiana University School of Medicine Exemplar of Professionalism Honor Roll in 2018, which recognizes individuals who embody the core values of excellence, respect, integrity, diversity and cooperation. In addition, she is the recipient of the Otis R. and Carol L. Bowen Scholarship and Dr. Calvin H. and Mary Tower English Scholarship.

“I want her to be able to do everything that she dreams of,” Schwartz said. “She has so many gifts to give to her patients and our profession.”