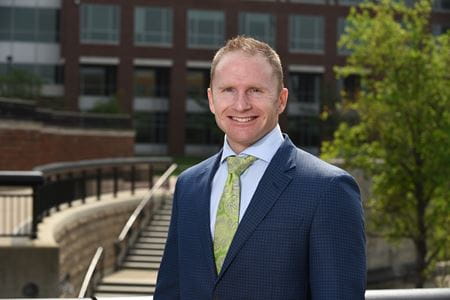 While many faculty physicians in academic medicine pursue research through clinical review, one physician-scientist in the Department of Otolaryngology – Head and Neck Surgery is headed back to the lab.

Rick Nelson, MD, PhD, is an otologist and neurotologist specializing in advanced surgeries that pertain to disorders of the ear. He also treats both adults and children with skull base tumors, cholesteatoma, cochlear implantation, hearing loss and facial nerve disorders. Specifically, he specialized in hearing preservation surgery for vestibular schwannomas and canal wall reconstructions. Dr. Nelson joined the IU School of Medicine faculty in 2014, after receiving his MD and PhD in Neuroscience at the University of Iowa.

To Dr. Nelson, the relationship between science and medicine are synonymous.

“When science advances, medicine advances,” Dr. Nelson said. “As a clinician, it is my obligation and interest to not only provide the best healthcare to my patients, but to also to take the information and form studies that result with better treatments.”

Along with clinical care, Dr. Nelson has two notable research endeavors: a genomics project funded by the National Institution of Health (NIH) and a clinical review on spontaneous cerebrospinal fluid (sCSF) leaks.

NIH FUNDING
Dr. Nelson was recently awarded an NIH K08 grant, a mentor-based basic science research grant under the guidance of Eri Hashino, PhD, of IU School of Medicine and Richard Smith, MD, of the University of Iowa. This semi-independent research role allows Dr. Nelson dedicated training in areas such as the latest in genomics technology.

The K08 grant is available to Dr. Nelson for the next five years. However, his next steps include receiving an NIH grant with an “R” activity code that would represent him as an independent private investigator.

CLINICAL RESEARCH
Dr. Nelson also leads an ongoing clinical research study about sCSF leaks.  When they occur, spinal fluid incidentally leaks into the ear through bone defects of the skull bone and the dura that line the brain. The skull bone erodes, allowing naturally retained water in the brain to leak. Dr. Nelson and his team are investigating what causes skull bone erosion, which is the critical factor in the development of sCSF leaks.

After reviewing thousands of patient CT scans, Dr. Nelson has established the following:

Following the third finding, Dr. Nelson obtained medical records to compare thousands of CT scans of patients who had obstructive sleep apnea with those who did not.

“We know that sleep apnea increases the pressure inside of the head,” Dr. Nelson said. “The clinical implication from this finding is that every sCSF leak repair patient should obtain a sleep study and that OSA likely leads to the development of sCSF leaks.”

Ongoing research for Dr. Nelson will review if sleep apnea treatment can prevent sCSF leaks over the long term.

ON A PERSONAL NOTE
Dr. Nelson is a father to three young children and, therefore, highly recommends frequent visits to the Children’s Museum. Other entertainment includes many outdoor parks in Central Indiana, including West Park in Carmel and Mulberry Fields in Zionsville.

Influenced by his wife, Dr. Nelson participates in long-distance running and recently participated in the 500 Festival Mini-Marathon. As luck would have it, they both were selected to run the New York Marathon this fall.

FOR ASPIRING CLINICIAN SCIENTISTS
The drive of being a clinician scientist for Dr. Nelson is the ability to provide latest evidence-based healthcare while moving academic medicine forward. Dr. Nelson provides these words of wisdom for medical students and fellow physicians:

“Interactions with individual patients are highly rewarding on a daily basis. It is our obligation to carve out time to engage in translational research to improve diagnostics and treatments for potentially thousands or millions of patients in the future.”

As Executive Assistant in the Department of Otolaryngology-Head and Neck Surgery, Darby is responsible for department promotions, events, travel, and scheduling. No two days are the same. Darby has a background in marketing and enjoys her involvement in ...