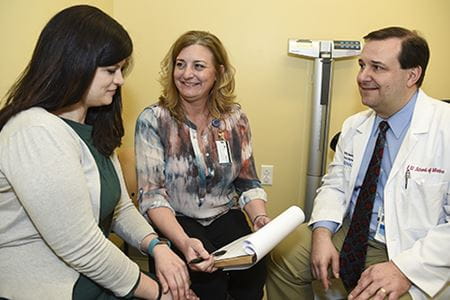 A recent study published in the New England Journal of Medicine – and co-authored by a faculty member in the Indiana University School of Medicine Department of Obstetrics and Gynecology – found that treating mild chronic hypertension during pregnancy can benefit both the parent and the child.

The results are from the Chronic Hypertension and Pregnancy (CHAP) trial consortium of more than 60 clinical sites across the United States that was led by the University of Alabama at Birmingham. Indiana University is among the collaborators. David Haas, MD, MS, the Robert A. Munsick Professor of Obstetrics and Gynecology, led the IU site for the study.

“We are very excited to have been a part of this important study that will impact clinical care and improve outcomes for so many pregnant patients and their babies,” Haas said. “We are also excited that we are going to continue to follow these families to look at long-term health impacts as well.”

The trial evaluated the effects of prescribing blood pressure medication to pregnant patients with mild chronic hypertension. The study results showed this treatment improved pregnancy outcomes without compromising the baby’s growth and overall health, which has been a primary concern from physicians for years. The new data will likely prompt clinicians to reevaluate recommendations and practice guidelines and start treating more cases of chronic hypertension in pregnant patients.

Chronic hypertension increases the risk for pregnancy complications, including maternal and perinatal death. The condition is associated with a three- to five-times increased risk for preeclampsia, placental abruption, preterm birth, small for gestational age newborns and perinatal death. It is also associated with a five- to 10-times increased risk for maternal death, heart failure, stroke, pulmonary edema and acute kidney injury.

The CHAP consortium launched in 2014 with funding from the National Institutes of Health’s Heart, Lung and Blood Institute. From September 2015 to March 2021, CHAP enrolled more than 2,400 pregnant women with known mild chronic hypertension, whose blood pressure was greater than 140/90 mmHg but less than 160/105 mmHg.

Notably, the CHAP trial is one of the most comprehensive and diverse studies of its kind. The Black patient population is disproportionately affected by chronic hypertension, and almost 50 percent of study participants were Black.

There was an almost 20 percent decrease in pregnancy complications for women treated with medication compared to the standard group. Complications included severe preeclampsia and preterm births before 35 weeks’ gestation.

Preeclampsia, a pregnancy complication that occurs after 20 weeks’ gestation, affects 2 to 8 percent of pregnancies in the United States but affects more than 30 percent of pregnant women with chronic hypertension. It is characterized by hypertension and sometimes signs of damage to other organ systems, such as the brain, liver and kidneys. In the active group, severe preeclampsia was reduced from 29 to 23 percent.

Preterm births before 35 weeks’ gestation were also significantly reduced in the active group, from more than 16 to 12 percent. Babies born before 35 weeks have an increased chance for short-term morbidities, long-term health complications, and intellectual and developmental disabilities.

Additionally, the active group saw reductions in frequency of severe maternal hypertension, any preeclampsia with or without severe features, and any preterm birth before 37 weeks. There was slight or no difference in maternal cardiovascular complications and neonatal complications between the two study groups. Importantly, newborn size was also not affected by treatment.