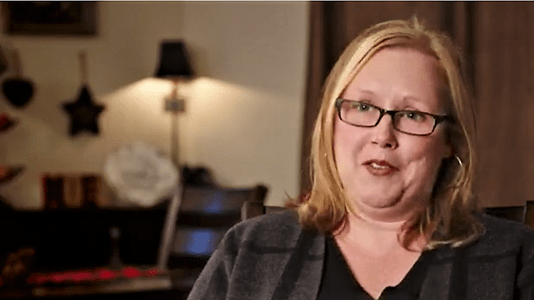 Angie Steeno was 29 years old when she received her first cancer diagnosis from metastatic gestational trophoblastic disease, often referred to as a molar pregnancy. Ten years later, in 2015, and expecting to be considered “cured” of her disease, Steeno happened to mention to her doctor that she felt a lump up high near her collarbone earlier that morning. Her doctor didn’t think she had anything to worry about but ordered some further testing to be sure. Within a matter of hours, she was diagnosed with cancer for the second time in her young life, and it was a cancer unrelated to the first.

Steeno was told she has triple negative breast cancer. It’s a mouthful and it’s scary, primarily because the term is often so poorly defined.  Triple negative breast cancer is a collective term for the cancers that don’t have the three most common receptors on them known for causing cancer to grow: estrogen, progesterone, or human epidermal growth factor receptor 2 (HER-2) . “Some people have estimated that there may be as many as 400 kinds of cancer mutations that could lead to what we call triple negative breast cancer,” said Anantha Shekhar, MD, PhD, executive associate dean for research affairs at the Indiana University School of Medicine and principal investigator for the IU Precision Health Initiative Grand Challenge.

Progesterone, estrogen and HER2 receptor-positive breast cancers each have currently available targeted therapies to treat them, in addition to chemotherapy, radiation and surgery.

Because Triple Negative breast cancer has not tested positive for any of these three receptors, it is the least understood, with currently no targeted treatments on the market.

In 2016, Indiana University announced its Grand Challenge Precision Health Initiative to tackle some of the most prevalent diseases affecting Indiana residents. In 2018, armed with its expertise in breast cancer, IU School of Medicine used a press briefing to announce its plans to find better treatments and eventually even a cure for triple negative breast cancer and several other diseases.

Angie Steeno was browsing the news when she ran across media coverage from the press briefing and its efforts in triple negative breast cancer. That is when she reached out to Dr. Shekhar to thank him for sharing his intellect, time and efforts to fund this aggressive disease.

Angie Steeno has undergone chemotherapy and five surgeries since her 2015 diagnosis. She currently sees her oncologist and oncology surgery team every six months in hopes of keeping the cancer at bay.

According to Dr. Shekhar, “Having people like Angie reach out to us and put a face to these diseases is extremely important because that is what humanizes everything we do. They provide us the motivation to defeat these diseases.”