New study may bring hope to patients with pancreatic cancer 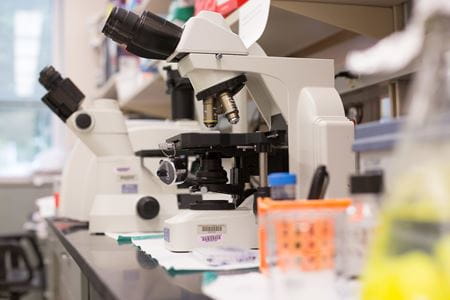 Pancreatic cancer is one of the most aggressive and difficult forms of the disease to treat, with a median survival rate of about eight months. While other forms of cancer have seen massive improvements in treatment success, survival rates in patients with pancreatic cancer—specifically pancreatic ductal adenocarcinomas, or PDAC—have changed very little in the last several decades.

That’s because pancreatic cancer cells tend to develop resistance to treatment over time, leaving many of the most advanced targeted therapies and immune therapies ineffective. But that could soon change.

Indiana University researchers from the IU Melvin and Bren Simon Cancer Center and the Herman B Wells Center for Pediatric Research have discovered a mechanism that is responsible for drug resistance in PDAC.

“PDAC is notoriously resistant to gemcitabine, which is the chemotherapy used to treat pancreatic cancer,” said Jingwu Xie, PhD, lead investigator of the study. “Our study revealed an important target that could lead to novel treatment options and an improved survival rate for patients with pancreatic cancer.”

The mechanism is a protein called Sox2, which the study found to be abundant in pancreatic cancer cells after they have built up a resistance to gemcitabine. Investigators also identified factors that contribute to the increased expression of Sox2, called the GLI-Sox2 signaling axis. Xie and his colleagues propose that disrupting this signaling axis could be an effective way to increase the sensitization of pancreatic cancer cells to the gemcitabine chemotherapy.

The investigators will continue to pursue answers using data from this study. Next, they will begin testing small molecule inhibitors against the GLI transcription factors and Sox2 to determine the effect with gemcitabine. Over time, Xie said he hopes to translate this data to new clinical trials for patients with pancreatic cancer.

For more information about this study, access the full manuscript published on October 31, 2018, in “Oncogene.”