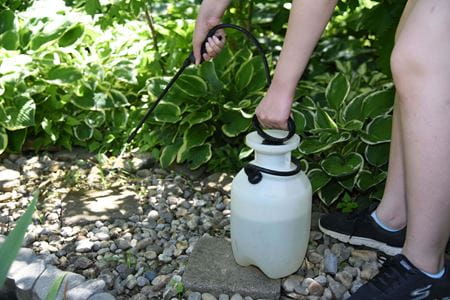 A recent study at Indiana University School of Medicine, Indiana University Fairbanks School of Public Health, Franciscan Health and the University of California San Francisco shows more pregnant women are exposed to a potentially harmful chemical used on crops across the Midwest. Now, the team is conducting a larger study to answer more questions about how people are being exposed.

“We don’t know what the actual risks and dangers are at this point, but this is a red flag that indicates we really need to look at this a lot closer,” said Jill Reiter, PhD, an assistant professor with IU School of Medicine Department of Obstetrics and Gynecology.

The team wanted to find out how many pregnant women are exposed to glyphosate, a chemical in Roundup used to kill weeds. They also wanted to know what the risk factors of that exposure were. Glyphosate is used by homeowners on yards and farmers on crops across the United States, but especially in the Midwest and Indiana on corn and soybeans. Since it first debuted in the ‘90s, the chemical has been used more each year and is now the most heavily used herbicide worldwide.

“It’s been in use for two decades, but hardly anything is published on the health effects in humans,” said Shahid Parvez, PhD, an assistant professor with the IU Fairbanks School of Public Health. “That’s why we decided to look at this chemical and came up with this study.”

The team studied 71 pregnant women in central Indiana ages 18-40. The women filled out a survey and provided a urine sample. The researchers found 93 percent had detectable levels of glyphosate.

“The women who had higher levels of glyphosate had shorter-term pregnancies,” said Dr. Reiter. “Shorter pregnancies could impact the baby’s long-term health.”

Now, the team is working on a larger study with 200 pregnant women from across the state to answer more questions about the effects of glyphosate on pregnancy outcome. Researchers also tested the women’s drinking water and found no glyphosate, leading them to consider food and contaminated air as potential sources of exposure.

“Our main crops in this region are corn and soybeans, and all these women in our study came from central Indiana, so we suspect diet is the primary exposure,” said Dr. Parvez. “Another finding of our study is that women who live in close proximity of agriculture fields have a higher level of glyphosate, so that indicates they might also have some exposure of glyphosate from inhalation, like dust from nearby fields in the air.”

The team also hopes to learn more about what people can do to stay safe and lower their exposure to glyphosate and other herbicides.

“We cannot conclude anything at this point about the primary exposure sources,” said Dr. Parvez, “but if someone is pregnant or planning to conceive, they should avoid the use of glyphosate-containing herbicides on the lawn or around the house and consume more organic food, especially those containing corn and soybeans, as precautionary measures.”

As they try to answer more questions, the team says they’re looking forward to expanding the study and finding out more about how glyphosate is impacting the people of Indiana.

“This is really just the beginning, so we don’t have much at this point,” said Dr. Reiter, “but we know we need more human studies on the long-term health risks.”

“We have a very energetic and committed group of researchers involved in this study,” said Dr. Parvez, “who are driven and motivated to gather new, scientific evidence of the potential risks of glyphosate exposure in pregnancy for both mother and baby health in Indiana and beyond.”