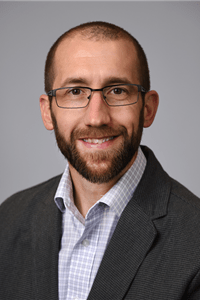 An IU School of Medicine researcher and his colleagues have determined that human gut bacteria composition correlates with the severity of malaria in children through the use of samples from clinical studies performed in Uganda and animal models. Nathan Schmidt, PhD, associate professor of pediatrics at IU School of Medicine, is the senior author of this study, published this month in Cell Reports.

Schmidt’s research focuses on malaria, which is caused by Plasmodium parasites. Those parasites are spread to humans through bites from infected mosquitos. The most recent World Malaria Report in 2020 by the World Health Organization reported that more than 400,000 people die of malaria every year and that an estimated two-thirds of those deaths are children under the age of five. Ninety-four percent of malaria cases and deaths happen in Africa. Schmidt’s publication shows new insight into the dynamic interactions between intestinal gut bacteria and the immune system when people are infected by Plasmodium parasites.

“We were able to show that gut bacteria are an important aspect in contributing to the severity of malaria,” said Schmidt, who is also a researcher at the Ryan White Center for Pediatric Infectious Diseases and Global Health, as well as the Herman B Wells Center for Pediatric Research. “In the present study, we collaborated with Chandy John, MD, and colleagues, to show that Ugandan children who have differences in severity of malaria also show differences in their stool bacteria. This was an exciting observation that was consistent with our previous observations in the models, yet at present is only a correlation. Therefore, additional studies are needed to further demonstrate the potential causative role of these differential bacteria towards the severity of malaria.”

The current study also identified there are continuous signals provided by gut bacteria during a Plasmodium infection that impact the immune response and control of parasite burden.

Based on this study, as well as another publication in Cell Reports in December 2020, Schmidt and his colleagues believe regulating gut bacteria may be one way to limit the burden of parasites in the blood, as well as boost immunity to Plasmodium parasites. After doing additional research, Schmidt said they may be able to develop gut-based therapeutics for young children, which could both limit the severity of malaria after initial Plasmodium infection while also boosting immune memory to provide protection from developing severe malaria following subsequent infections.

Malaria has also been in the news recently because of an early vaccine trial in Africa which European researchers report as 77 percent effective at preventing the disease. Schmidt said the ongoing COVID-19 pandemic has been a good reminder of the importance of infectious disease research.

“This pandemic has definitely caused our society to take a step back and realize there are major challenges present throughout the world that we’ve often forgotten about,” said Schmidt. “It’s also exciting for me to see the current generation of scientists coming along, who seem to have a broader perspective of the world and a better appreciation for global challenges. That’s spurring a generational movement that will hopefully lead to big improvements to some of the major challenges around the globe. The development of mRNA-based vaccines may represent a new technology and tool that can be utilized for malaria vaccines and to help fight other diseases that have been scourges for society.”

Schmidt credits his colleagues and collaborators, including those in Africa, for helping him make progress in learning more about malaria.