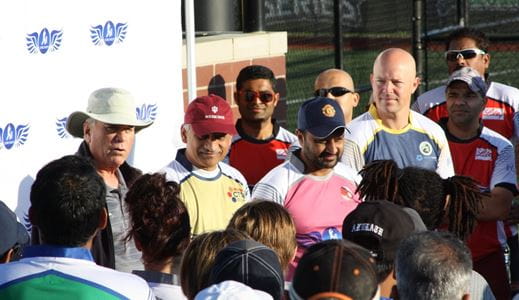 Anantha Shekhar, MD, PhD, executive associate dean for research affairs at IU School of Medicine, founding director of the Indiana Clinical and Translational Sciences Institute and a native of India, has been a cricket fan since he was a young boy, often playing pick-up games with his friends. As an adult, he likes to sneak peeks at Cricket matches happening around the globe via his iPhone. So, when founders of the Cric Indy, Indiana-based Cricket tournament approached him about participating in this year’s tournament, he was interested because of his love of the sport and for many other reasons.

Cric Indy was founded five years ago by Feroz Syed, also a native of India and CEO of Skill Demand, a local staffing company as a casual way for people who love cricket to connect outside of their businesses and organizations. Out of the love of the game, grew a networking event that takes place the evening before the big event with a deeper purpose. “It has a focus on diversity and inclusion that evolved beyond loving the sport to reaching through the invisible walls that surround us, to truly connect us,” said Syed.

“Bringing diversity, equity and inclusion to the forefront allows organizations to be purposeful about innovation, welcoming to diverse stakeholders and solutions focused,” said Sydney Rucker, Director of Diversity Initiatives Faculty Affairs, Professional Development and Diversity for Indiana University School of Medicine, who participated on the diversity panel at the event.

Another panel participant explained their views on diversity and inclusion as the difference between being invited to a party and truly enjoying yourself at a party. “Diversity means you are invited, inclusion means you are asked to join in and you do.”

The networking event was held at Corteva Agriscience in front of a crowd of about 250 people. Since coming to Indianapolis in 2014, participation in the Cric Indy tournament itself and its fan base has exploded. This year, a record 18 teams participated in the annual tournament, forcing it to relocate to Grand Park in Westfield, which offers a larger venue.

“Indianapolis is a global city, as evidenced by the hundreds of people who showed up to watch the annual Indy Cric league cricket tournament”, said Shekhar. “In commonwealth countries like the United Kingdom and Australia, people come out in droves to watch cricket. It’s similar to how Americans watch baseball.”

While the Indiana CTSI team, captained by Dr. Babar Khan, associate professor of medicine at the IU School of Medicine, didn’t win the tournament this year, they do plan to play again next year. The best player of the day for the CTSI team turned out to be Stuart Warden, PhD, from the School of Health and Human Sciences at IUPUI and senior member of the Indiana Musculoskeletal Research Center who grew up playing Cricket in Australia.

“Participation in Cric Indy aligns well with our goals of promoting diversity, inclusion, collaboration and exercise. It was wonderful to see so many people from different backgrounds not only come out and watch cricket, but actually form teams and play a game they might not have ever played before. That’s a great example of diversity and inclusion”, added Shekhar.

In addition to highlighting the importance of diversity and inclusion, Cric Indy and this year’s title sponsor Corteva Agriscience, also invited a local nonprofit called Helpings of Hope Indy to the stage to share its mission  to eliminate world hunger and food waste, and create food security through community-driven projects that provide affordable, nutritious food for people in areas that would be considered food deserts. Participants and fans of Cric Indy are invited to volunteer and give to the nonprofit as they see fit.