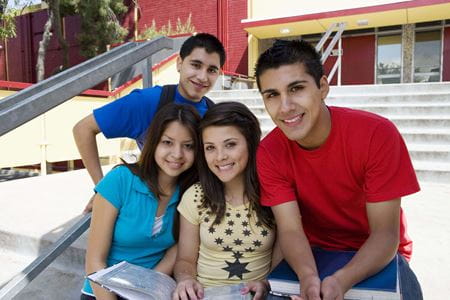 Our new study published in Child Development addressed this question by testing the role of ethnic identity, social support, and anger regulation as potential buffers that may help offset the negative impact of discrimination on the mental health of Mexican-origin adolescents living in the Midwestern United States.

Study participants were 269 Mexican-origin adolescents who were 12-17 years old, recruited from public schools, churches and community-based organizations in a Midwestern region. Youths completed survey questionnaires on laptop computers at three time points, spaced approximately four months apart. The majority of the youths were born in the U.S. (71 percent), with the remainder born in Mexico (29 percent). All adolescents came from families where both biological parents were also from Mexico. The adolescent participants were asked to complete questions about their discrimination experiences (e.g., if they had been called an insulting name or witnessed a family member being treated unfairly because of the color of their skin, accent, or cultural background), ethnic identity (e.g., how good or proud they feel about being Mexican, how much they engage in cultural practices or how much time they spend trying to find out about their cultural background), social support from their family, friends or significant others, and the degree to which they suppressed or expressed their anger.

Overall, we found that a strong ethnic identity and greater social support were protective factors in the link between discrimination and adjustment problems in this sample of Mexican-origin youths. That is, having a stronger ethnic identity or more social support weakened the link between discrimination and adjustment problems. Anger suppression also acted as a protective factor. On the other hand, we found that outward anger expression was a risk factor. That is, outward anger expression tended to exacerbate the association between discrimination and adjustment problems. Importantly, these protective and risk factors differed according to the level of analysis.

By identifying ethnic identity, social support from family, friends, or significant others, and anger suppression as effective coping strategies in the discrimination—adjustment link among Latino youths, this study points to coping strategies that can help inform future prevention and intervention efforts aimed at mitigating the detrimental impact of racism on Latino youths’ well-being. For example, because a strong sense of ethnic identity was found to serve as a buffer against the adverse influence of discrimination on externalizing problems, clinicians working with a given Mexican-origin adolescent dealing with discrimination may consider encouraging ethnic identity exploration and bolstering his/her ethnic identity commitment in order to lessen the risk of developing externalizing problems over time.