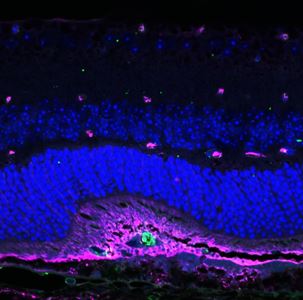 Sometimes drugs work, and we don’t know why. Most drugs are designed to change the function of a protein in the cell that is known to be important for disease. But others are identified based on their effects on cells’ behavior, or even the whole body, without a known “molecular mechanism”.

Indiana University School of Medicine researchers have developed one such chemical. It’s not yet a drug, but it has potential, and they recently identified its target in the cell, as just published in ACS Chemical Biology.

Dr. Tim Corson’s laboratory in the Eugene and Marilyn Glick Eye Institute, IUSM, is interested in finding new ways to treat abnormal, excessive blood vessel growth in the eye. This process is an important feature of common eye diseases like wet age-related macular degeneration and proliferative diabetic retinopathy. Together, these diseases are a prime cause of blindness in adults. And the existing drugs don’t work for everyone, are expensive, and have side effects. Knowing this, Dr. Corson’s team worked with chemist Dr. Seung-Yong Seo at Gachon University, South Korea, to find new molecules that block blood vessel growth without harming other cells. They tested these first in cells, and then in whole organisms, and found a promising new compound with the memorable name of SH-11037 that effectively blocked abnormal blood vessel growth in the eye.

But they didn’t know how it worked within the cell. So, in their recent paper, they describe how they sought to find out, with grant support from the Retina Research Foundation, the International Retinal Research Foundation, and the National Eye Institute. They used a molecular “fishing rod” with SH-11037 as bait to pull out of cells the protein that SH-11037 interacted with. And they caught a whopper! SH-11037 bound to a protein called soluble epoxide hydrolase (sEH). sEH is involved in controlling fatty acid signaling in the cell, activating some signaling molecules and inactivating others. Dr. Corson’s team found that SH-11037 could block the activity of sEH, validating sEH as SH-11037’s target. In collaboration with Dr. Samy Meroueh of the Department of Biochemistry and Molecular Biology, they also provided computational evidence of how SH-11037 might interact with the structure of sEH.

sEH had already been implicated in abnormal blood vessel growth in the eye, but they found for the first time that its levels and activity are increased in eyes undergoing neovascularization, putting it at the scene of the crime. So it makes sense that blocking sEH function with SH-11037 might shut down abnormal blood vessel growth. To prove this point, they tested two previously-discovered sEH inhibitors and found that, just like SH-11037, these existing chemicals could block neovascularization in the eye.

Unexpectedly, this molecular mechanism study therefore opens multiple avenues for developing potential new drugs: SH-11037 could be tweaked to make it an even better sEH inhibitor, or existing and new sEH inhibitors could be explored for blocking neovascularization. The Corson lab’s goal is to improve therapeutic options for patients with blinding eye diseases, and these findings put them one step closer.