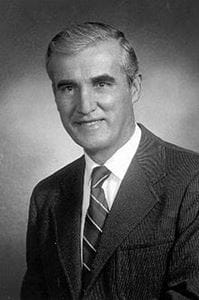 At the beginning of his career, with very little ancillary support, Dr. Donohue developed and perfected a surgical method of curing stage 2 non-seminomatous testicular cancer, a common, fast-growing type of the disease. Setting a standard for the new technique, Donohue was able to reduce diseases resulting from the radical surgery, establish a procedure that saved the nerves controlling ejaculation function and create a guide for surgeons to follow. His efforts decreased hospital stay and avoided the use of a stomach tube passed through a patient’s nose.

Dr. Donohue soon became an internationally recognized investigative urological oncologist. Thanks to his advancements, the cure rate of testicular cancer drastically increased from 5 percent to 90 percent.

Dr. Donohue joined the faculty at IU School of Medicine in 1965. Starting as a professor, Dr. Donohue became chairman of the Department of Urology in 1972. Dr. Donohue’s contributions to the department led IU School of Medicine’s program to establish international leadership in prostate, bladder, kidney and testicular cancers.  Dr. Lawrence Einhorn came to IU in 1973 and helped to pioneer the use of cisplatin in testicular cancer.  Their collaboration became a model for multi-disciplinary care.

In 1995, IU School of Medicine honored Dr. Donohue with the Glenn W. Irwin Jr. Distinguished Faculty Award. And in 2005, Dr. Donohue was awarded the Ramon Guiteras Award for his outstanding contributions to the art and science of urology. In 2008, he received the Keyes medal, the major award for lifetime achievement in urology, from the American Association of Genito-Urinary Surgeons.

Graduating from Cornell Medical College in 1958, Dr. Donohue completed his urology residency at Massachusetts General Hospital. He retired as chairman of the Department of Urology at IU School of Medicine in 1995.