Could the eye be a detector for Alzheimer’s disease? Shannon Risacher responds. 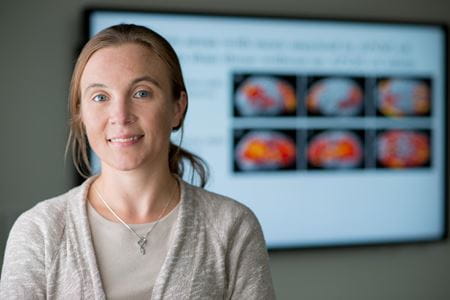 From the latest technologies in neuroscience to exploring the development of effective therapies—new advancements in Alzheimer’s disease are uncovered each year. Nearly six million people in the United States have Alzheimer’s disease, with the number expected to more than double by 2050. While experts at Indiana University School of Medicine pursue research that could lead to effective treatment, the researchers at the Indiana Alzheimer’s Disease Research Center also aim to discover new methods for screening at-risk older adults for early symptoms of the disease.

Shannon Risacher, PhD, assistant professor in the Department of Radiology and Imaging Sciences and leader of the Neuroimaging Core of the Indiana Alzheimer’s Disease Research Center, recently published a study on a new biomarker for Alzheimer’s disease in the journal Brain Communications. Using a technique that had not been studied in depth in the early stages of Alzheimer’s disease, visual contrast sensitivity or the ability to distinguish dark from light, Risacher found that poor contrast sensitivity was linked to the presence of Alzheimer’s pathology in the brain, even in older adults who were cognitively normal. The study, which included participants with an average age of around 70 years old, is the first using contrast sensitivity as a non-invasive way to better detect early signs of the disease and eventually aid in screening and prevention.

Risacher discussed the study and how it could benefit future Alzheimer’s disease research.

What led to your interest in sensory measures and their relationship with Alzheimer’s disease?
My interest in the link between sensation and memory started many years ago. I was very interested in how sensory information, like a smell for example, could trigger memories. Alzheimer’s disease represents the opposite of “normal” memory, as the most common early symptom is a loss of memory. Thus, it represents an opportunity to understand the biology of memory. In addition, Alzheimer’s disease is a huge health crisis, affecting millions of people around the world. Unfortunately, we have no treatments that will slow or stop the disease and still know very little about how and why it develops. Thus, my interests in memory and sensation, as well as a drive to help people suffering from this terrible disease led to a focus on studying Alzheimer’s.

What encouraged you to pursue the connection between visual
stimuli and Alzheimer’s disease? 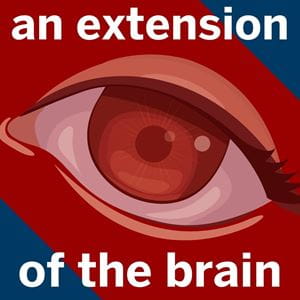 A lot of people don’t know that the eye is an extension of the brain. The retina, which is the tissue at the back of the eye that allows you to see, is actually part of the brain. It is one of the few parts of the brain that is outside of the skull, making it a relatively accessible part of the brain to study. Previous research in the field has suggested that people with Alzheimer’s disease often have problems with their vision. My goal was to see whether the pathology thought to cause Alzheimer’s disease, the amyloid-beta plaques and tau tangles, was directly linked to visual changes.

What biomarker did you potentially discover?
We found that performance on a test of visual contrast sensitivity, or the ability to distinguish dark from light, was strongly linked to the amount of Alzheimer’s pathology in the brain. In other words, people who had a more difficult time distinguishing dark from light were more likely to have significant amyloid and tau in the brain.

How can finding this biomarker benefit future Alzheimer’s disease research?
This finding could be very important in two ways.

First, this device could be used as a screening tool to detect individuals at higher risk for having Alzheimer’s pathology in their brain. The device we used to measure contrast sensitivity (frequency doubling technology (FDT)) is easy, inexpensive and non-invasive. In fact, FDT is already approved by the FDA as a test for glaucoma. Many researchers believe that the treatments for Alzheimer’s disease will likely be preventative. Thus, once a preventative treatment is discovered, patients who would benefit from these preventative treatments will need to be safely and easily identified, ideally before they have cognitive symptoms or dementia. Currently, our best tools for identifying older adults with Alzheimer’s pathology are through a PET scan, which is expensive and requires sophisticated medical equipment, or through a spinal tap, which is invasive and requires an experienced physician. If a preventative treatment is developed, we will need a screening tool to identify which individuals should undergo the more expensive and invasive testing for Alzheimer’s pathology (i.e., PET or CSF). Our goal is to establish sensory measures as potential screening tools that could be given to older adults annually to identify who may need additional testing and potentially preventative treatment. This study provides strong evidence that visual contrast sensitivity measured using FDT could be a useful screening tool for detecting amyloid and tau in the brain, even in people without cognitive symptoms.

Second, many companies are working on new treatments for treating or preventing Alzheimer’s disease. However, in order to effectively test whether a drug is effective at reducing or removing amyloid or tau in the brain, the patients should have amyloid or tau in their brains to begin with. Although clinical diagnoses of Alzheimer’s disease are generally correct, up to 20 percent of people diagnosed with Alzheimer’s disease based on their clinical signs do not actually have amyloid and/ or tau pathology in their brains. When doing a drug trial that targets amyloid, you only want to enroll patients who have amyloid in their brains or else the treatment response you measure will be muddied by people getting a treatment for a disease they don’t have. However, it is very expensive and invasive to give everyone enrolled in a drug trial a PET scan or spinal tap. Just like in a clinical setting (previously described), drug companies need an inexpensive and non-invasive way to screen for people who are at high risk for having pathology. Therefore, the test that we examined, visual contrast sensitivity, could potentially be used in drug trial screening to filter out people who are unlikely to have the pathology being targeted and inexpensively and easily identify people who are good candidates for the more extensive and expensive tests.

Overall, our study suggests that visual contrast sensitivity is a sensitive, inexpensive, quick, easy to administer, already FDA-approved and non-invasive way to screen for older adults who are likely to have Alzheimer’s pathology in their brains.

What was the most surprising thing you uncovered?
I would say there were two things that were most surprising in this research. First, I was surprised about the strength of the association that we observed between visual contrast sensitivity and particularly tau deposition in the brain. Second, I was somewhat surprised that the at-risk group, who did not yet have dementia, showed such a strong relationship of contrast sensitivity and tau. This finding supports the now well-established idea that pathology in the brain is likely building up before patients are diagnosed with dementia. Further, the finding suggests that observable but subtle changes in vision are occurring before the onset of dementia and maybe even before the onset of cognitive symptoms.

How would you like to expand this research in the future?
I would like to expand the research in a few ways. First, I would like to repeat the experiment in a larger sample of individuals, ideally from a more diverse population (race/ ethnicity, age range, people with many comorbidities, etc.). Second, I would like to extend these studies longitudinally and capture the change in visual contrast sensitivity over time relative to changes in Alzheimer’s pathology over time. At this point we do not know whether contrast sensitivity can capture dynamic changes in Alzheimer’s disease pathology over time. If sensitive to changes over time, visual contrast sensitivity could be used not just to screen patients but to also monitor the disease over time. These studies have not yet been done to my knowledge. Finally, my studies involve not just visual measures but measures from other sensory domains as well (smell, auditory). This study is designed to collect sensory data from all three sensory domains in the same people, along with advanced neuroimaging of brain structure and function, as well as the presence/absence and extent of amyloid and tau. Thus, my goal is to determine whether measures from multiple sensory domains could be combined together to improve screening for Alzheimer’s disease risk in older adults, monitor disease progression and hopefully one day confirm treatment response.

Overall, I believe there are a number of different directions to move forward with this work and I’m excited to have the opportunity to explore these ideas and hypotheses to hopefully have a positive impact on Alzheimer’s disease screening, diagnosis and treatment in the future.

This research was funded by the National Institute on Aging (NIA), which is part of the National Institutes of Health (NIH). The NIA generously awarded Shanoon Risacher, PhD a K01 grant that funded much of this work. In addition, the promising results that were seen in this area led to additional generous funding by the NIA to continue and expand Risacher’s work on sensory changes in Alzheimer’s disease. In addition to the NIA, the Alzheimer’s Association, Indiana Clinical and Translational Science Institute, Indiana University-IU Health Strategic Research Initiative, and the Indiana Alzheimer’s Disease Research Center have provided essential support to get this work started and without which this work would not exist.