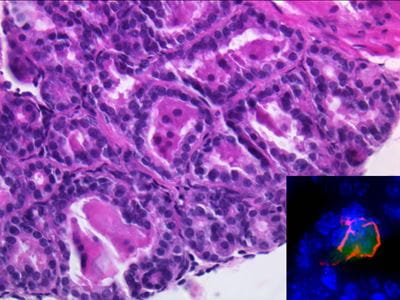 A new study led by graduate student Darrelle Colinot at Indiana University School of Medicine and published in the journal The Prostate may have found yet another cause of inflammation in the prostate — the common parasite Toxoplasma gondii. Inflammation of the prostate is closely associated with benign prostate hyperplasia (BPH) and prostate cancer. BPH affects nearly half of men by age 50 and is the leading cause of lower urinary tract symptoms. How BPH develops and what determines its severity is not fully understood, but it has become clear that inflammation is tightly associated with BPH symptoms.

In experiments performed in mice, researchers found that Toxoplasma gondii, a common single-celled parasite, disseminates to the prostate within two weeks after infection. Once in the prostate, it remains in the form of latent tissue cysts for at least 60 days, and can persist for the rest of the host’s life. The presence of these parasitic cysts results in chronic inflammation in the prostate.

The origins of inflammation in the prostate are likely multi-factorial and may include bacterial colonization, viruses, environmental and dietary components and hormones. If Toxoplasma gondii is also found to trigger chronic inflammation in human prostate, the finding takes on added significance given the prevalence of the parasite in the human population. According to the Centers for Disease Control and Prevention (CDC), up to 22 percent of Americans are infected with Toxoplasma gondii. This parasite is transmitted through oocysts that are excreted into the environment by infected cats or through ingestion of raw or undercooked infected meat.

Remarkably, Toxoplasma gondii infection in mice induced severe hyperplasia and a particular histological pattern of “microglandular” hyperplasia in the prostate, two pathological features of human BPH not normally observed in mouse models of prostate inflammation. “The similarity between the pathology triggered by this parasite in mouse prostate compared to what is commonly observed in the pathological regions in the prostate of humans suffering from BPH makes Toxoplasma infection a great model to study prostate disease,” said Travis Jerde, PhD, associate professor of pharmacology and toxicology, IU School of Medicine, one of the senior investigators involved in this work.

“Aside from establishing a new powerful tool for the study of prostatitis, this research raises the question of whether Toxoplasma gondii, which is extremely common in humans and can propagate in almost any tissue, might actually infect the human prostate and lead to chronic inflammation, and ultimately diseases such as BPH or cancer”, said study co-senior author and Toxoplasma gondii expert Gustavo Arrizabalaga, PhD, associate professor of pharmacology and toxicology, and microbiology and immunology, IU School of Medicine.

In ongoing experiments, Drs. Jerde and Arrizabalaga are collaborating with further experts including IU School of Medicine parasitologist Dr. William Sullivan and University of Illinois-Chicago pathologist Dr. Maarten Bosland to investigate whether any correlation between Toxoplasma gondii infection and BPH exists in humans.

Dr. Arrizabalaga obtained his B.S. in Chemistry and Biology from Haverford College and his Ph.D. in Biology from M.I.T. His doctoral work focused on translational regulation during embryonic development under the mentorship of Dr. Ruth Lehmann. From 1999...