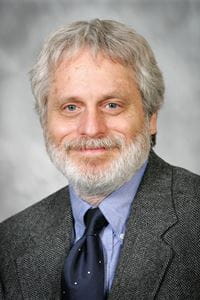 A $100,000 grant from the Big Ten Cancer Research Consortium Foundation will further research into metastatic osteosarcoma conducted by the Greenfield Lab.

Ed Greenfield, PhD, a professor in the Department of Orthopaedic Surgery, received the consortium’s Kenneth and Verna Mae Jessen Award. The announcement was made in November.

Greenfield's long-standing research interests focus on basic and translational aspects of bone biology in addition to metastatic osteosarcoma. He is part of the Indiana Center for Musculoskeletal Health and the Indiana University Melvin and Bren Simon Cancer Center.

Funding from the foundation will further Greenfield’s proposed project “Repurposing Romidepsin for Metastatic Osteosarcoma.” According to the foundation, reviewers were impressed by collaboration efforts outlined in the proposal: While Greenfield will serve as primary investigator, he will work closely with colleagues at the Simon Cancer Center as well as the Purdue University Center for Cancer Research.

“The project exemplifies the team science approach that is a hallmark of the Big Ten CRC,” according to a press release.

After a long career as a faculty member at Case Western Reserve University in Cleveland, Greenfield moved to Indianapolis in 2019 to join the IU School of Medicine Department of Orthopaedic Surgery.

His lab’s osteosarcoma project aims to repurpose FDA-approved drugs to block growth of lung metastases, which is the primary cause of lethality in osteosarcoma patients.

The Greenfield Lab is powered by skilled postdoctoral and graduate-level researchers, lab techs and managers. Residents and medical students are always encouraged to join in the work.

Greenfield serves as a reviewer for the Clinical Orthopaedics and Related Research, or CORR. He was named a top CORR reviewer for 2022. Less than six percent of reviewers for the journal complete the four or more reviews in a year needed to achieve this title.