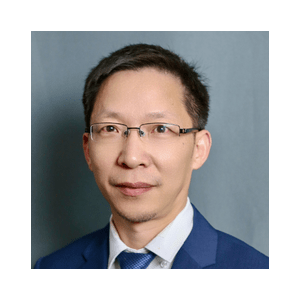 The Herman B Wells Center for Pediatric Research greeted the new year by welcoming a new principal investigator to the Gene and Cell Therapy research program.

Renzhi Han, PhD, completed his undergraduate education at Peking University where he earned his Bachelor of Science in Physiology and Biophysics in July 1998. He was then awarded an International Postgraduate Research Scholarship and University Postgraduate Award to pursue PhD studies at the University of Western Australia, where he ultimately earned his PhD with distinction in May 2003. Shortly after, he began his postdoctoral training at the University of Iowa under the mentorship of Professor Kevin P. Campbell, PhD, an investigator of Howard Hughes Medical Institute and a member of the National Academy of Sciences. Upon completion of his mentored training, Han joined the Loyola University Medical Center as a tenure-track assistant professor, where he developed an independent research program in translational medicine. In 2014, Han joined the Ohio State University as a tenured associate professor and in 2020 was promoted to tenured full professor before joining Indiana University School of Medicine as a professor of pediatrics in January 2023.

The Han Lab’s research is focused on elucidating the molecular mechanisms of muscular dystrophy and developing novel therapeutic strategies to fight against devastating genetic diseases affecting skeletal and cardiac muscles.

In the last several years, the Han Lab has made significant contributions to the development of gene editing therapeutic strategies for correcting the genetic base underlying Duchenne muscular dystrophy (DMD), a fatal genetic disorder characterized by the progressive loss of muscle. In 2015, Han’s group reported the first evidence that CRISPR gene editing can rescue the expression of dystrophin, a gene that helps keep muscles intact, in a postnatal animal model of DMD.

“I am super excited about the opportunity to work at the IU School of Medicine, the Department of Pediatrics and the Wells Center,” expressed Han. “I look forward to working with many outstanding investigators and clinicians to translate our gene editing therapeutic approaches into clinic.”

Learn more about the Han Lab.

Jackie supports the Herman B Wells Center for Pediatric Research at IU School of Medicine. As communications generalist, Jackie helps spread the word about the Wells Center's commitment to improving the health of children in Indiana and beyond through basic and translational research. She has several years of experience in non-profit and academic marketing and communications.