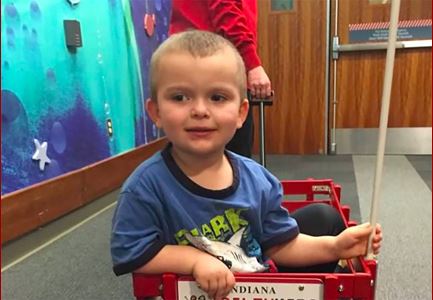 At 2 am on Valentine’s Day, 2016, Kate Beatty found herself in the back of an ambulance with her youngest son. They were being transferred from a local hospital to Riley Hospital for Children at Indiana University Health. She rode alongside her child, their doctor’s words ringing in her ears: Mrs. Beatty, your son is going to be a Type 1 diabetic for the rest of his life.

That day, 4-year-old Robert Joseph—RJ to his friends and family—joined 18,000 other American children diagnosed with Type 1 diabetes in 2016.

Often diagnosed during childhood, Type 1 diabetes is characterized by an autoimmune response that attacks the insulin-secreting beta cells found in the pancreas. Without sufficient insulin production, blood glucose levels are not regulated properly. For people like RJ, daily injections of insulin are required to stay alive.

A diagnosis like this sends families reeling—with good reason, said Emily Sims, MD. According to Sims, a pediatric endocrinologist at Riley Hospital and physician scientist at Indiana University School of Medicine, a Type 1 diabetes diagnosis triggers a seismic shift in the lives of the patient and their family.

“When you give a Type 1 diagnosis, it permanently changes the everyday life of that patient,” Sims said.

“Every time they wake up in the morning, every time they want a meal or even a snack, they have to think about their blood sugar. Understandably, it can be a difficult adjustment for families.”

Just 15 hours earlier, Kate was checking off a mental to-do list in preparation for RJ’s fourth birthday party. Tidy the house, check. Put up decorations, check. Get the cake, check. But RJ was not in the mood to celebrate.

“By the time he started vomiting, we called the party off,” Kate said. “Every time he would vomit, I would try to push fluids—like Gatorade or Sprite—not knowing that they were causing his sugar to continue to elevate.”

As a mother of three, Kate has tended to her fair share of sniffles and bellyaches. But she said that as the day went on, she could sense that this was different. She called her doctor’s office throughout the day and was assured that fluids and rest were the most appropriate remedies. But as midnight approached, RJ grew delirious, unable to focus on his mother or say “mom.”

That’s it, Kate thought, we’re going to the emergency room.

Though she didn’t know it at the time, RJ was experiencing diabetic ketoacidosis, a life-threatening complication of diabetes, which caused his body to produce high levels of blood acids called ketones. If left untreated, RJ could have gone into a diabetic coma or lost his young life.

“I think that God put it on my heart that night that my kid was not OK—that I needed to take him to the emergency room. If I would have told myself that I could wait until morning, we could have lost him,” Kate said, trailing off for just a moment. “And when I stop and think about how close we were–that’s a rock-your-world kind of moment.”

After four days in the intensive care unit, hours of education, and one large haul from the pharmacy, RJ returned home—faced with a challenging new routine.

In the weeks after diagnosis, Kate recalled having to restrain RJ for every finger prick—a common practice for testing blood to measure sugar levels. Between measuring blood glucose and administering insulin therapy, 4-year-old RJ’s skin could meet the needle more than 20 times in a single day. And he wasn’t the only one struggling to adjust.

“I remember being in a really hard place myself,” Kate said. “I went through a mourning process—missing our old life. It was hard, and it felt unfair. And as a mother, the worry consumed me. I thought, ‘what if I don’t measure right?’ or ‘what if I give him too much insulin?’ It was terrifying.”

Over time, Kate said that her feelings of grief and uncertainty gave way to acceptance and optimism—buoyed by the resilience of her family. They’ve never been closer, Kate said, pulling together for the common cause of RJ’s health. Kate and her husband, Mike, are in constant communication about RJ’s glucose levels, food consumption, activity and needs. Her middle son, Alex, helps Kate when RJ needs extra support or convincing. RJ’s sister, Abbey, is known in her school as a diabetes advocate and is inspired by her youngest brother to pursue a career in medical research.

“Being diagnosed at 4 years old, RJ doesn’t really remember life before diabetes,” Kate said. “We have tried to make it as normal as possible for him, and he has accepted it like a champ.”

Today, RJ and his family have the help of a monitoring system that regularly tracks his glucose levels and a pump that delivers his insulin. These tools allow Kate to check RJ’s glucose levels even when they aren’t together—a helpful tool now that he is in school.

“We go from being diagnosed, with 10 to 15 finger pricks and six or seven shots of insulin a day, to almost none now,” Kate said. “These technologies help us to monitor him and potentially save his life. How could you not be grateful for that?”

However, Kate said that she is most grateful to Juan Sanchez, MD, and the team of nurses and diabetes educators at Riley Hospital. Crediting this team with saving her son’s life, Kate said she is committed to paying that forward.

Since the diagnosis, Kate has been active in advocating for diabetes awareness, mentoring and supporting other moms of Type 1 children and participating in research trials offered by investigators from IU School of Medicine—investigators like Sims.

Type 1 diabetes is not one disease

Sims and her colleagues at IU School of Medicine have worked to identify biomarkers that signal genetic disposition for abnormally working beta cells in diabetes. She uses these markers while performing metabolic tests on first-degree relatives—parents, siblings or children—to gather data that could lead to novel tests and treatment.

“Type 1 diabetes is not one disease. Research shows more and more that it’s a heterogenous condition, with varying attributes,” said Sims, who sees precision therapy as a future treatment. “Using a panel of biomarkers, a physician could characterize a patient’s diabetes and design more effective treatment regimens that really target that individual’s condition—instead of lumping all Type 1 diabetes into one diabetes bin.”

For RJ and his family—along with millions of Americans—the progress of Sims and her colleagues has lifechanging implications.

“It gives me chills just thinking about a cure for RJ—about how close we are to groundbreaking findings,” Kate said. “I just hope and pray that my kid will get to see that in his lifetime.”

Until then, every day at 2 am, Kate wakes up to an alarm—it’s time to check her son’s blood glucose. This is life with Type 1 diabetes.

Juan Sanchez, MD, is an associate professor of clinical pediatrics at the Indiana University School of Medicine Department of Pediatrics. Emily Sims, MD, is an assistant professor of pediatrics and a diabetes researcher at the IU School of Medicine Center for Diabetes and Metabolic Diseases and the Herman B Wells Center for Pediatric Research. To learn more about trials, visit the clinical trials research page.