In Memory of Thomas D. Lund 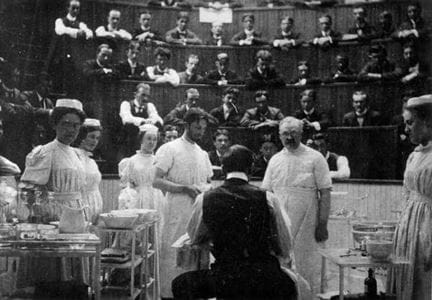 “I wouldn’t know a microbe if I were to meet one coming down the street”—William Niles Wishard, Sr., M.D. Ushers in Antiseptic Surgery in Indianapolis

As the COVID-19 Pandemic roars on exerting relentless daily pressures on medicine for research, change and innovation, we return to an Indianapolis of the latter part of the 19th century to remember another time of great transformation in medicine that brought about the saving of many lives.

Thurman B. Rice, M.D.1 sets the medical scene at this time that preceded use of antiseptic surgery procedures with his telling of a story from his own Indiana University School of Medicine student days when Orange G. Pfaff, M.D.2 who by then was an old man, “told us students of an occasion when he was watching a certain distinguished surgeon remove an enormous ovarian cyst.  The pedicle of the tumor was so heavy that an ordinary suture would not hold it.  The surgeon broke the suture two or three times, and then with an oath looked about the room.  He saw a strong cord hanging from a window blind.  It was used for pulling down the blind.  He stepped to the window, cut off the cord with his scalpel, washed the cord in a basin of water, and tied off the tumor.  This time the suture held – but we may suppose that the patient died.”

Can you imagine yourself being in the photograph you see in this blog?  There you are in the gallery watching a surgery in 1887 at the Indianapolis City Hospital where William Niles Wishard, Sr., M.D.3 is standing near nurses, surgeons, and students around a patient on an operating table with no one wearing a mask, gloves or any other protective equipment to prevent the spread of infection, at least, not yet.  Medical professionals would begin to recognize face masks as a vehicle to help control surgical sepsis in the late 1890s.

By the mid 1880’s progress in infection control and technology was well underway in the good hands of Dr. Wishard and others in Indianapolis.  Count the lives saved because of what they did and not the years that have passed since that time to today.

The scientific revolution of new ideas for infection control in the surgery setting is owed much to British surgeon, Joseph Lister, M.D., whose research and application of Louis Pasteur’s germ theory laid the foundation for surgery today.  In 1867 the journal The Lancet published Dr. Lister’s research on the use of carbolic acid compounds as an antiseptic for the treatment of surgical wounds and a way to eliminate germs in the surgical setting.  Dr. Wishard recognized Dr. Lister’s views and experience with the antiseptic treatment of wounds which had been presented at the 1881 International Medical Conference in London as signifying “the beginning of a revolution in the treatment of wounds.”
Often told by colleagues, progress in Indiana medicine is a story of taking one step at a time and learning and listening to one another.  Dr. Wishard and others credited John Chambers, M.D.4 with being the first to carry out antiseptic surgery procedures in Indianapolis in 1884.  How this first surgery happened tells us much about what inspires innovation in medicine.

In 1966 William Niles Wishard, Jr., M.D recalled that after his father heard Dr. Chambers tell of the work of Dr. Lister, he asked Dr. Chambers to make a list of the materials he needed for an antiseptic surgery and then Dr. Wishard took action to procure those materials for Dr. Chambers.  During that first surgery Dr. Wishard was in the background of the surgery room holding in his hand the large steam spray apparatus that was used at the time to keep the atmosphere in the room moist with carbolized steam to destroy the “invisible bacteria” and prevent entry into the open wound.

That first surgery was an amputation and it worked.  The healing of the wound was prompt with only slight suppuration.  Dr. Chambers would go on to modify and carry out antiseptic surgery procedures that were adapted at City Hospital.  Others would follow building on Dr. Lister’s work, and expand the understanding of how to prevent infection in the surgical setting through wearing of surgical masks, gloves, hats, and the sanitizing of medical instruments.

Influenced by reports of New York’s Emergency Lying-in Hospital, Dr. Wishard introduced antiseptic methods in the obstetrical wards at City Hospital with puerperal sepsis deaths becoming rare soon after Dr. Chambers’ antiseptic surgery debut.  Dr. Wishard shared the results with the Marion County Medical Society.  Society members reacted with great skepticism with some members believing that the improved results were due to operations being done in an uncontaminated new building.

Dr. Wishard remained undeterred and continued to make the case for antiseptic surgery procedures to his colleagues.  One of the skeptics, Dr. Joseph W. Marsee5 accompanied Dr. Wishard in 1886 to visit hospitals of the Missouri Pacific Railroads where these improved methods in surgical techniques were being used.  Dr. Marsee returned to Indianapolis, fully convinced.   In a momentous speech before the Marion County Medical Society, he said, “Gentlemen, I wouldn’t know a microbe if I were to meet one coming down the street; but I know that whereas I was once blind, thank God I now see.”  From that time on, little skepticism was expressed regarding the germ theory of disease.  The Indianapolis medical community was on board.

We need to remember Dr. Wishard and his colleagues that in their time faced and overcame the challenge of how to do battle against bacteria and the spread of infection.  Learning, listening, taking action, and sharing are all as important as ever today among colleagues in research and medicine doing battle against COVID-19, a battle that will be won.

This blog is dedicated to our friend and colleague, Thomas D. Lund, who passed away on May 27, 2020.  Archivist, historian, problem-solver, researcher, Tom Lund, the founding librarian for the Edward A. Block Family Library at Riley Hospital for Children at Indiana University Health in 2000, served the hospital for 14 years and then served as Archival Consultant for the Riley Children’s Foundation for 5 years.  In his last assignment, Tom on the front-lines of customer service for an area hospital helping to get people with COVID-19 connected to care, support, and resources.  In his last days, Tom was still doing project work in his spare time for the Riley Hospital Historic Preservation Committee, a group for which he was a founding member in 2013.  Tom passionately loved history, and most especially, the history of Riley Hospital for Children.