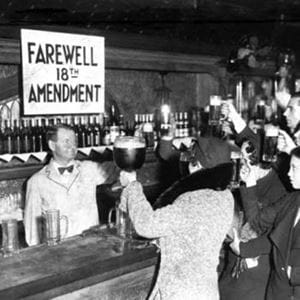 Americans celebrating the passing of the twenty-first amendment in 1933.[i]

Alcoholism: From Past to Present

Around the time America was founded, alcohol was actually thought to be healthy. It was thought to contribute to warming the body and aiding in digestion.[1] It was used to treat things such as colds and fevers and it was even used to sedate women during labor. A well-known physician in the late eighteenth century named Benjamin Rush argued that the acceptance of the use of alcohol caused alcoholism and recommended that cold water should be used in its place. Rush was the first physician to recognize drunkenness as an illness.[2] However, alcohol continued to be used for medical purposes. During the mid-nineteenth century, alcohol was the main painkiller used in surgery. Over time, other painkillers, such as narcotics and chloroform became available. However, many patients still preferred the use of alcohol.

Despite popular opinion in the US, the eighteenth amendment was enforced in 1920. This meant that the production, transport, and sale of alcohol was illegal. Much of the public believed that the amendment failed to attain its goals. There was evidence that mortality rates due to alcohol consumption were higher during the “dry period.”[3] As it is popularly stated, people tend to want what they can’t have. This proved to be true during the prohibition, and Americans found other ways to obtain alcohol, for example at hidden bars, known as speakeasies. Although the eighteenth amendment had good intentions behind it, it was in place for less than fourteen years. The twenty-first amendment, which repealed the eighteenth amendment, was passed in 1933. On that day, Americans celebrated for they had supported the repeal.

What is alcoholism? What effects does alcohol have on the body? These were some of the scientific questions explored in Thurman Rice and Rolla Harger’s 1949 book, Effects of alcoholic drinks, tobacco, sedatives. This book can be found at the Leo J. McCarthy, MD, History of Medicine Room and Collection at the Ruth Lilly Medical Library. Rice and Harger were both professors at Indiana University. Rice was a professor of public health, while Harger was a professor of biochemistry and toxicology. Reading this text, it is clear that in the 1940s there were already many known effects that alcohol had on different parts of the body. Rice and Harger knew that it opened up the blood vessels on the skin, which caused the skin to be flushed and the body to lose heat faster. It sped up digestion by producing more gastric juices. It could weaken the heart and slow down blood flow. It could damage the liver and increase urination.[4] The part of the body that was most affected by alcohol was the brain. Alcohol could cause slower reaction times, warped judgement, blurred vision, and clumsiness.[5] When these things are compromised, these researchers demonstrated, alcohol consumption could result in bad decisions and poor outcomes.

As public health professionals, Rice and Harger were also interested in the social effects of alcohol. They demonstrated that many crimes were committed because of the use and abuse of alcohol. One of the most common crimes was public intoxication. Arrests made for public intoxication were the most common arrests, aside from traffic violations.[6] Another frequent arrest as a result of alcohol use was driving while intoxicated. Operating a vehicle under the influence of alcohol is dangerous not only to the driver, but also to the people around the driver. Sometimes, it costs people their lives. Along with these crimes, there was also an increase in violence when alcohol was involved. Rice and Harger cited a study by Doctor Ralph S. Banay that determined how many of the felonies were a result of alcohol use. His study found that alcohol caused 3 out of 4 sex crimes, 1 out of 3 cases of assault, and 1 out of 4 murders.[7] There was clear and strong evidence that alcohol causes poor judgement and violent behavior.

With all of the possible dangers that resulted from alcohol use, there was a need for treatment. There were many different forms of treatment for alcoholism. In the case of acute alcohol poisoning, the stomach may have needed to be pumped or vomiting may have needed to be induced to rid the body of the alcohol.[8] For chronic alcoholism, the patient may have needed to ingest vitamins from the B complex. These vitamins improved appetite and fought the negative effects on the nervous system.[9] Another wonderful resource already available in Rice and Harger’s time was Alcoholics Anonymous.[10] This is a group of people who have some sort of alcohol problem that meet up to discuss their struggles with alcohol and support others with similar struggles. While there were treatments to help the body physically, alcoholism often went deeper than that. There was a need for emotional support to help cure patients. To quit drinking required more than just to state that you wanted to quit. It required the strength to avoid putting yourself in situations where you may have been tempted, and this journey could be made easier when you didn’t have to go through it alone.[11]

Opinions on alcohol have drastically changed over time. Although it was once thought to be healthy, consuming alcohol turned into an illness. Fears about the harmful effects of alcohol led to Prohibition, which was meant to help but may have caused additional danger. As stated in the Rice and Harger book, alcohol has proved to have negative effects on the body and result in poor judgement and sometimes violence. This book demonstrates the origins of today’s thinking about alcoholism and its treatment.

[1] Stolberg, Victor B. “A Review of Perspectives on Alcohol and Alcoholism in the History of American Health and Medicine.” Journal of Ethnicity in Substance Abuse, Vol, 5(4), page 41, (2006).

[3] Lender, Mark E. 1987. “Drier and Drier, and Wetter and Wetter: Drinking and the Pluralist Renaissance.” In Drinking in America, 138. New York: The Free Press.