Historical Book of the Week: A Treatise on the Diseases of the Chest and on Mediate Auscultation (1834) 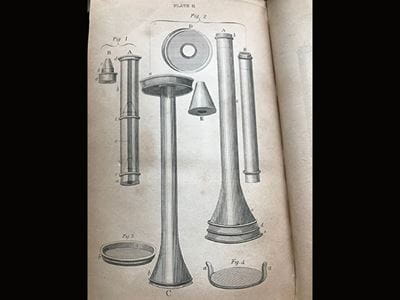 Figures 1-4 from the Ruth Lilly Medical Library copy of A Treatise on the Diseases of the Chest, showing the anatomy of the early stethoscope, invented by Laennec in 1816.

Laennec’s A Treatise on the Diseases of the Chest

Written by René Laennec (1781-1826), a French physician and inventor of the stethoscope, A Treatise on the Diseases of the Chest and on Mediate Auscultation primarily reads as an observational and highly analytical encyclopedia, divided into three primary sections. The first is “Of the Exploration of the Chest,” in which Laennec describes the proper technique for using his stethoscope and also establishes a baseline for understanding auscultatory sounds.[1] The following two sections are entitled, “Diseases of the Bronchi, Lungs, and Pleura” and “Diseases of the Heart and its Appendages.”[2] This organizational style that Laennec employs lends itself to assessing anatomy as a means to determine pathology, a pervading philosophy within French Medicine at the time. While Laennec has been largely popularized and praised by the modern medical community for his invention of the stethoscope, a closer look into his personal and professional life reveals a man who is as enigmatic as he is brilliant.

Laennec first published his De l’Auscultation Médiate in France in 1819, and English physicians were eager for a translated publication. John Forbes, an English physician close to Laennec, took on this role.[3] All medical translations, illustrations, and a section on the Laennec’s life were compiled and composed by Forbes.[4] He took on this role for all four editions of the book, the last edition being published in London, 1834. A copy of this fourth-edition translation can be found in th eThe Leo J. McCarthy, MD, History of Medicine Room and Collection at the Ruth Lilly Medical Library of the IU School of Medicine.

A Treatise on the Diseases of the Chest and on Mediate Auscultation was a transformative work that changed the face of medicine. The first and foremost reason for this is Laennec’s invention of and development of the techniques for operating the stethoscope, a medical instrument that every physician carries today. The design and function have changed very little since its inception two centuries ago, an impressive feat for any invention.[5] Laennec used his new invention in tandem with his training in the Paris Medical School, which was largely characterized by an approach that relies on autopsy as a means to determine pathology. Additionally, his discoveries on the nature, signs, symptoms, pathology, and treatment of tuberculosis, addressed in this treatise as “phthisis pulmonalis,” were groundbreaking.[6]

However, despite his monumental accomplishments, within his own time, “Laennec was poorly understood by his contemporaries, even by his friends.”[7] Jacalyn Duffin, a medical historian who has performed extensive research on Laennec, explains that although Laennec was at the forefront of technological developments in medicine, his philosophy surrounding medicine was controversial in the eyes of his contemporaries and was often critiqued or condemned.[8] This is most likely due to the changing nature of medicine at this point in history. Medicine was fading away from religious justifications and taking a step in a more secular direction, away from a humoral line of thought.

Duffin wrestles with the idea of Laennec’s apparent paradoxical existence amongst his peers. While his mind and stethoscope gave birth to the anatomo-clinical ideology, a medical method of disease diagnosis that relied on correlating clinical findings with anatomical abnormalities that could be detected using his stethoscope and confirmed via pathological autopsy, Laennec began to reject some of its components after seeing it put into practice by many of his contemporaries.[9] Duffin traces these dissonant behaviors to Laennec’s “ultra-conservative religious and political beliefs.”[10] She also reports that these beliefs led to ostracism from his contemporaries and outright mockery in his later years. Duffin then outlines how Laennec’s reputation eventually ascended posthumously as the applications for his stethoscope become more realized.[11]

In many ways, Laennec’s work laid the foundation for modern medicine in a methodological capacity, coupling his invention of the stethoscope and implementation of auscultative techniques that are still used to this day. In reference to his personal life and professional reputation, it is fair to cast Laennec as a dynamic and paradoxical figure whose personal and medical philosophies were under constant scrutiny by his contemporaries. This scrutiny was most certainly due to his religious fanaticism, ultra-conservative values, and a partial clinging to a modified humoral theory in a world of medicine that was progressing in a more secularized, science-based direction.