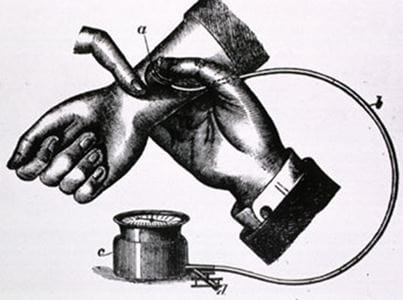 Traditional physicians were hesitant to take up new instruments like the sphygmomanometer (pictured) because they felt they were losing their skills and expertise.[i]

The Importance of Blood Pressure Measurements

Early in the 20th century, doctors were just beginning to understand the importance of blood pressure monitoring and how vital it was to regulate blood pressure to maintain health in the human body.[1] Many were turning towards new blood pressure instruments and research to help them treat their ailing patients. Blood-Pressure Its Clinical Applications is a twenty-chapter textbook that was written during this changing time. The authors, Dr. George William Norris, Dr. Thomas M. McMillan, and Henry Cuthbert Bazett joined together in writing this textbook. A fourth-edition copy from 1927 can be found in the Leo J. McCarthy, MD, History of Medicine Room and Collection at the Ruth Lilly Medical Library. The book had been a part of the Indiana University School of Dentistry Library obtained through a Carnegie Grant. The textbook was originally published at the University of Pennsylvania. The three authors of this textbook were professors at the University and enthusiastic members of the medical community. Dr. Norris was the lead author. He and Dr. McMillan were active physicians at the Pennsylvania Hospital at that time. The third author, Mr. Bazett, taught Physiology at the same university and held a Bachelor’s Degree in Medicine.[2]

By 1913 (the year the first edition of this book appeared), unhealthy blood pressure was considered a disease, or a sign of a disease, and doctors were trying to figure out how to treat it and why it was occurring.[3] The authors wrote Blood-Pressure Its Clinical Applications due to this new interest in blood pressure and its effects on the body. Since this textbook was written for the physicians, all of the verbiage and illustrations are from a clinical point of view. The illustrations consist of 47 engravings and one color plate.[4]At the time of publication, this was a common form of illustration. These engravings are mainly graphs and diagrams describing the information the authors collected and evaluated.

When this textbook appeared, blood pressure was a very heated topic in the medical community. Blood pressure instruments were being developed that were hard to read and very cumbersome. Although new instruments were frequently being introduced that made them easier to use and less bulky, many traditional physicians were still hesitant about these new devices. They feared these new instruments would take away the power they felt over their patients by placing their fingers on them and calculating their blood pressure through feeling the pulse. Some even felt antagonistic towards these instruments. Other physicians, by contrast, were pushing for standardization of instruments as they appreciated this new aid and the information that was appearing.[5] These debates helped fuel the research and interest of the authors of this textbook. New blood pressure instruments prompted all physicians, including our authors to rethink science as well as their practice.

Physicians began to determine the meanings behind the different numbers produced by these instruments. They began to obtain direct readings and determine normal ranges for blood pressure. Through the determination of these numbers, physicians started to understand the importance of their patients maintaining a healthy blood pressure.[6] A major addition in the fourth edition of this textbook is the first two chapters concentrate on the physiological considerations in terms of blood pressure. The physiological information gathered for these chapters, such as the observation that blood pressure is reduced when the body is resting, was brand new. The authors also indicated that there was a relationship between the blood pressure and the circulation rate of the blood flowing. The authors stressed how important all of this information was for the clinician. In addition, the authors included several chapters that introduced their newly found knowledge concerning blood pressure in various diseases and circumstances such as pregnancy.[7]

The authors made it clear that the most important part of treating a person with high blood pressure was determining and eliminating the reasons for the high blood pressure. In addition, they said that it was necessary to monitor and study the daily life and routines of the patient. It was also emphasized that it was imperative to treat the person and not the blood pressure. Some of their recommended treatments included rest, relaxation, and massaging the neck and back. The authors asserted that it was unwise for the physician to communicate the blood pressure numbers to their patient as this would only cause the patient to worry. In addition, it was noted that sharing this information would only over emphasize its importance.[8]

[3] Hughes Evans. “Losing Touch: The Controversy over the Introduction of Blood Pressure