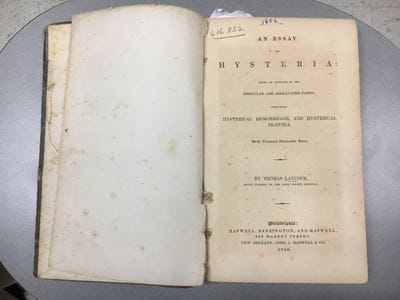 The copy of Laycock’s publication available at IUPUI’s Ruth Lilly Medical Library. For an 1840 print, this book is remarkably well preserved throughout.

The copy of Laycock’s publication available at IUPUI’s Ruth Lilly Medical Library. For an 1840 print, this book is remarkably well preserved throughout.[i]

From 1839-1840, a doctor named Thomas Laycock produced a series of essays that explored the long-debated ailment of Hysteria (in all its ambiguity). In 1840, a printed collection of Laycock’s essays was published by the company Haswell, Barrington and Haswell, under the title An Essay on Hysteria: Being an Analysis of Its Irregular and Aggravated Forms; Including Hysterical Hemorrhage, and Hysterical Ischuria. With Numerous Illustrative Cases. One such copy of this 1840 printing has made its way to Indiana University’s Leo J. McCarthy, MD, History of Medicine Room and Collection at the Ruth Lilly Medical Library. A somewhat ignored text, Laycock’s codex has much to offer the historian. For those investigating the era’s medical knowledge and practices, large sections of the book focus exclusively on case studies from Laycock’s personal experience. In fact, most of the text is case-notes from over twenty-seven different diagnosed “Hysterical” cases. For those investigating the era’s institutionalized sexism, this monograph is an exquisitely rich vein to tap.

Out of this nearly two-hundred-page text, I have selected four sections that, I believe, adequately represent the entirety of the work. The first section is a description of “Hysterical Ischuria” and two fascinating documented cases Laycock investigates.[1] The second section details multiple “Nervous Affections” which Laycock asserts are caused by Hysteria.[2] The third section excerpts what Laycock claims causes Hysteria (and how certain organs are particularly to blame). Largely, the section speaks of the ovaries affecting other bodily functions.[3] The final section distinguishes Hysteria to be the product of the female.[4]

While most of Laycock’s medical conclusions were typical for the era, he was far ahead of his time in many respects. For example, Laycock was a pioneer in psychoneurology. He believed that sentience was due to a system of biological processes centered on the brain (although, to Laycock, there was little separation between science and classical philosophy). Laycock created a fairly revolutionary theory asserting an animal-like reflex action of the human brain in 1840 and he was even an extremely early adopter of Darwinism.[5] He helped found psychiatry and neurology, but is obscure in the annals of history. He influenced many students to continue his work, but largely is unrecognized himself.[6] You would be hard-pressed to find primary documentation which illuminates the origins of nineteenth-century psychiatry, gender relations, scientific sexism, medical deception, and mesmerism as complete (and compelling) as Laycock’s An Essay on Hysteria: Being an Analysis of Its Irregular and Aggravated Forms; Including Hysterical Hemorrhage, and Hysterical Ischuria.

Aside from Laycock’s conviction concerning the brain’s relationship to the rest of the body, his diagnosis of Hysteria parallels that of most other medical professionals of his time (and, indeed, going back to Hippocrates).[7] Throughout the work, Laycock will often speak of ailments that affect men, but will attempt to flip the diagnosis when an identical ailment is presented to be affecting women. For example, Laycock touches briefly on epilepsy. When he speaks of epilepsy as an independent condition, he only relates it to afflicting men. However, when a woman has epilepsy, he asserts the epilepsy to be a mere expression (or symptom) of Hysteria. To Laycock, hysteria seems to be a blanket term for all manner of anatomical and psychological problems for women because they are women. Hysteria, thus, is exclusively a female ailment. More, it is exclusively a white female ailment (as shown by those diagnosed, and those considered).[8] He relates his gender-specific diagnosis even more explicitly when he denotes the most likely time to contract Hysteria is during menstruation. Even the men Laycock diagnosed with Hysteria (only three), he still blames the female body as its cause. Laycock purports direct contact with a hysterical uterus during gestation infected those “afflicted” men with hysteria. An Essay on Hysteria asserts that Hysteria originates in the ovaries and can “infect” organs that are deemed to be related. In Laycock’s work, those related organs are still exclusively of the female gender.  Concerning why women are more affected than men (although both go through the same biological contacts during development), Laycock attributes his disproportionate diagnoses to the frailer “faculties” of women and their inherent deceitfulness.

Don’t take his faulty foundational assumptions to simply parrot the standard narratives of other medical professionals in his time. He was an incredibly well-researched man. Laycock came to his conclusions largely through observation and study. Out of the twenty-seven cases that Laycock examined, the two ‘newest’ cases he dealt with directly. He discovered that they were legitimately faking it.[9] The older of the two was caught (and later admitted that) she had been drinking her urine in the night to vomit and claim Hysteria in the mornings. The younger was directly implicated as well, but no definitive admission occurred. As to the reason for their deception, it is unwritten, and therefore, unknown. As these cases are the first discussed within An Essay on Hysteria, I think it would be safe to infer they skewed Laycock’s misogynistic perception of Hysteria (and its origins). This is evidenced by An Essay on Hysteria’s insistence that women are biologically inclined to deceive others. While it would have been much simpler for Laycock to follow the diagnoses of his predecessors, Laycock continued to suspiciously investigate the assumed medical facts of his day. He mistrusted the conclusions of his forebears and peers, although ultimately, he came to many of the same sexist conclusions as they. Laycock actively attempted to determine truth through direct evidence; at least, direct evidence as he saw it. An Essay on Hysteria is the product of his mistrust and attempt at scientific investigation.

An overlooked literary gem, Laycock’s An Essay on Hysteria: Being an Analysis of Its Irregular and Aggravated Forms; Including Hysterical Hemorrhage, and Hysterical Ischuria holds many insights into the origins of modern psychological science and understanding. It holds many insights into the false historical narratives attained through inaccurate (and culturally-biased) scientific investigation. An Essay on Hysteria ultimately fails in its scientific quest. It could not overcome the biases of era in which it was penned. Ultimately, it only succeeds at distinguishing artificially emplaced, disproportionate values of worth between genders and between races. However, it is ahead of its time in many aspects despite its numerous scientific failings. At first glance, Laycock seems unremarkable in his writings and only definable as another product of medical knowledge in 1840. That assessment would be incorrect in numerous ways. We can’t forget this book was written at the forefront of human scientific understanding radically shifting. Laycock attempted to champion the philosophies of the past while reconciling it with the new evidences of the changing era. He was compelled to understand human consciousness during the most revolutionary period of modern medical understanding. Though categorically incorrect in his final assessments, Laycock attempted to employ the scientific method to the best of his ability. Although largely forgotten in the medical history mainstream, Laycock was a pioneer, who helped pave the way for Freud and psychiatry as we know it.

[1] Laycock, Thomas. An Essay on Hysteria: Being an Analysis of Its Irregular and Aggravated Forms; Including Hysterical Hemorrhage, and Hysterical Ischuria. With Numerous Illustrative Cases. Haswell, Barrington and Haswell, (1840): pgs. 3-13.

[i] Laycock, Thomas. An Essay on Hysteria: Being an Analysis of Its Irregular and Aggravated Forms; Including Hysterical Hemorrhage, and Hysterical Ischuria. With Numerous Illustrative Cases. Haswell, Barrington and Haswell, (1840).