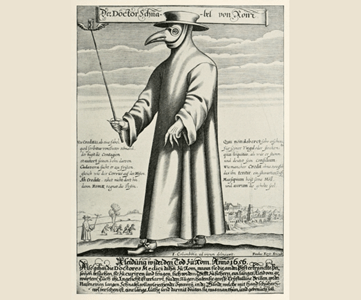 Copper engraving of a plague doctor in seventeenth-century Rome (1656).[i]

The Black Death through Modern Eyes

Ralph H. Major, M.D. applies his 20th century perspective to diseases throughout history in his book, Disease and Destiny.[1] The Ruth Lilly Medical Library of IU School of Medicine houses Major’s masterpiece in the Leo J. McCarthy, MD, History of Medicine Collection. This text was written for a general, American public and was meant to educate people with no medical background about the historical nature of certain diseases and to demonstrate how those diseases were understood in the 20th century with the development of modern medicine. Individual chapters examine specific diseases, the main historical figures affected by the disease, and the overall impact on each disease-ridden era in terms of politics, religions, and culture. Major concludes each chapter by drawing attention to the current state of medical knowledge on the disease. He explains the latest developments in research while also describing how the disease impacts his readers in the mid-1930s.[2] Diseases discussed in his book include: The Black Death, Jail Fever (Epidemic typhus from lice), Smallpox, The Pestilence that Walketh in Darkness (Malaria), The Disease of Lazarus, Yellow Jacket (Yellow Fever), The Legacy of Bleeding, and The Worst Plague of All (Syphilis).[3]

One of Major’s motives for writing the book was to present a modern perspective on historical diseases in light of new technological and scientific developments. In the late nineteenth century, researchers began looking at infectious diseases as having an agent that causes harm, like a parasite or a virus, instead of the historical idea of sin or hardships causing disease.[4] The field of science was growing and expanding rapidly during this time. Major trained in this context, and his writing demonstrates the extent to which modern science completely reframed people’s conceptions of disease.

A specific example of Major’s 1936 perspective on historical illness can be seen in the first chapter: “The Black Death.”[5] Major begins the book by discussing a plague that kills one-third of ancient Athens during the Peloponnesian War.[6] Major explains that the plague devastated ancient Athens so badly that the war was lost, and the intellect and philosophies of Athens died alongside those who succumbed to the plague.[7] After speaking of the effects the plague had on the war, Major examined what a 14th-century physician thought about the causation of the plague: “…Guy de Chauliac’s description of the havoc this disease wrought is quite as interesting from the historical as from the medical viewpoint. He tells us it was so contagious that ‘even by looking at one another, people caught it’.”[8] The major paradigm shift between the 14th-century physician and Major’s 20th-century training was the Germ Theory, which stated that diseases were caused by microorganisms. The 14th-century physician was medically baffled at the plague, believing disease contraction to be possible through sight. Major recognized this difference, asserting that the medieval physician’s pre-modern medical training would not allow him to understand the true causation.

While Major was attempting to interpret historical disease through a modern lens, Lester Little challenged Major’s ability to do such a task in his 2011 article “Review Article Plague Historians in Lab Coats.”[9]  As Little’s article explains, the scientific community in the early 20th century was attempting to identify current discoveries of diseases with the development of the microscope (i.e. the initial understanding of the molecular level) with diseases that had affected civilizations throughout history. [10] However, despite medical advances, was it possible for Major to assume that the epidemics he and his colleagues were studying as 20th-century physicians were the same epidemics that the 14th century physicians were studying? Could the disease have evolved throughout time to a more or less virulent form? If so, the parallels that Major draws between historical and modern medicine may not be medically valid. Little writes “…the question should no longer have been whether what we can see before us under a microscope is the same disease as the ones we can read about in historical accounts, but whether past epidemics, or some or any part of them, were the same as what we now have indisputably before.”[11]

Major was living in a time of scientific optimism and believed that the false beliefs of the past could be corrected by modern observations. Although it is now understood that the diseases themselves may have evolved, Major was one of the first scientifically trained historian to start re-examining ancient diseases through the lens of 20th-century knowledge and discoveries.[12] He looked at specific diseases, examined how these diseases were viewed in the historical time that the disease was prevalent, and then applied 20th century knowledge to assign causation and assess the current status of the disease. Major artistically interwove conversations of different cultures, time periods, and disciplines to form a story that illustrated the evolution of knowledge about specific diseases throughout history.