New History of Medicine Display about Central State Hospital on the 3rd floor, please stop by and check it out. 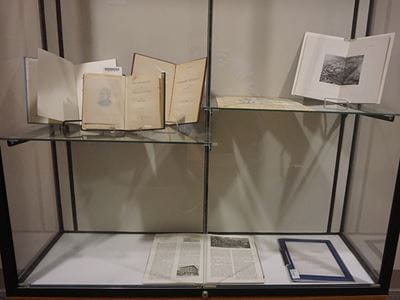 A Display from the Ruth Lilly Medical Library

Central State Hospital (formerly named the Indiana Hospital for the Insane) operated in Indianapolis from 1848 until it closed in 1994 (amid long-standing rumors of patient abuse), in a move toward community-based care for the mentally ill. A few log cabins housing the insane of Indiana preceded Central State. From its original five patients to the maximum of almost 3000 in the 1920s, Central State was originally a collection of Victorian buildings, including the women’s dormitory, known as Seven Steeples, which was built according to the Kirkbride plan (http://www.kirkbridebuildings.com/). In this plan, patient exposure to natural light and fresh air were considered key factors in “curing” mental illness. By the 1970s, most of the historic buildings had been declared unsafe and were demolished, replaced by smaller cottage style plain brick buildings.  Central State had its own cemetery between approximately 1855 and 1947. According to a 2014 Indianapolis Star article, an estimated five hundred seventy-five patients were buried there. Graves were not systematically given markers or other identification. An estimated 2000 patients died at Central State, based on autopsy records, although most remains were returned to their families. Records related the cemetery are incomplete, so the actual number of deaths and burials may be higher. A brief overview of Central State’s history can be found in the Encyclopedia Of Indianapolis. The Indiana Medical History Museum (IMHM) is currently located in what was the Pathology Building on the grounds of the former Central State Hospital.

(These items are currently located in the physical display case in the third-floor hallway across from the Leo J. McCarthy, MD History of Medicine Room (307) at the Ruth Lilly Medical Library, Indianapolis, IN through October 2018.)

These items, from our History of Medicine collection, relate to Central State Hospital (previously named the Indiana Hospital for the Insane) in Indianapolis:

(Available on campus and off campus with authorized logon)

(Available on campus and off campus with authorized logon).

Links to Other Online Resources

Central State has captured the public’s attention in many ways. There are a number of videos freely available concerning Central State; however, most were produced by non-professional filmmakers and tend toward supposed paranormal occurrences in the now abandoned buildings that remain.

If you are interested in learning more, there is one professionally produced video. The focus is primarily about paranormal events.

These audio and video files from the WFIU NPR radio and WTIU PBS television stations at Indiana University (Bloomington, IN) include an interview with the Indiana Medical History Museum’s executive associate director:

This audio file and accompanying web page come from Jeremy Bradley’s Top of the Charts and the Open Road syndicated radio show:

(from the Digital Collections of the IUPUI University Library, Indianapolis, IN)

* Amphitheater at Central State Hospital, 1916-1928. This is where Indiana physicians and medical students studied neuroanatomy and the pathology of mental illness.

physicians in the area of mental health (hired Dr. Sarah Stockton) and an opponent of physical restraints for mentally ill patients (burned all the restraints in the hospital)

* Dr. Walter E. Bruetsch (1923-1967)– Chief pathologist; forerunner in using malaria infection to effectively treat syphilis, prior to the discovery of penicillin (advanced syphilis infection was at that time, the largest cause of mental illness); noted researcher in other areas of mental illness, including increased protein levels in cerebrospinal fluid as a possible indicator of schizophrenia

* Dr. Sarah Stockton (1883-1888, 1899-1923), one of only 22 female physicians in the entire United States at the time, was hired as a general practitioner for the women’s wards. Her actual duties, however, included treatment of reproductive conditions that were then believed to exacerbate mental illness