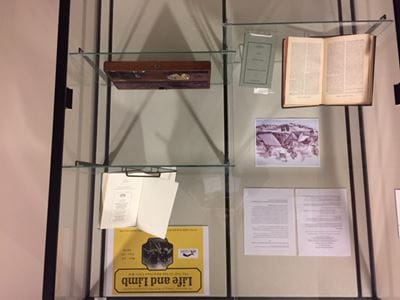 Life and Limb: The Toll of the American Civil War

“To commemorate the 150th anniversary of the American Civil War and the more than three million soldiers who fought in the war,

the exhibition  Life and Limb: The Toll of the American Civil War

This exhibition was developed and produced by the National Library of Medicine,

The American Civil War (aka: War Between the States, etc.) lasted from

Over three million soldiers fought on both sides of the conflict. More than 500,000 of those soldiers died, although many more were victims of diseases such as smallpox, yellow fever, diarrhea and malaria than died from battlefield wounds.

A number of soldiers nearly equal to the number of deaths were wounded. Many suffered severe lasting effects or ended up with permanent disabilities from war wounds or lifesaving surgery, including amputations, yet managed to beat the odds and survived.

Civil War medicine is often thought of as backward and even brutal. One common myth is that wounded soldiers, especially those undergoing amputations, were held down and operated on without anesthesia. The National Museum of Civil War Medicine refutes that image, reporting that in the estimated 80,000 Union surgeries, anesthesia (chloroform or, less often, ether due to its flammability) was used approximately 95% of the time ,with only 254 reported cases where none was used. The museum further explains that this perception probably arose from a misunderstanding, by non-medical witnesses to battlefield surgery, of why the wounded were thrashing around and moaning. The anesthesia itself, used lightly for these quick surgeries, caused the movements. This meant the patients sometimes had to be held down, but not because of a reaction to pain or lack of anesthetic.

Warning: Some photographs included in the display and the resources in the bibliography are graphic and may be disturbing to some viewers.

(not all linked items are available for viewing by the general public):

Indiana In the Civil War: Doctors, Hospitals and Medical Care

Bibliography of Sources at Indiana University

Life and Limb: the Toll of the American Civil War exhibition

National Museum of Health and Medicine: To Bind Up the Nation’s Wounds

PBS The Civil War -A Film by Ken Burns