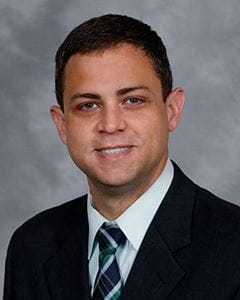 Adam Hill, MD, palliative care physician at Riley Children’s Hospital, is a proud Indiana native. He is a husband and a dad. He loves Butler basketball, enjoys poetry, running, and playing with his dogs.

Adam is also a recovering alcoholic with a history of depression for a large portion of his adult life.

His first encounter with depression began in medical school and throughout his residency where at first, he found it to be quite manageable. As his career advanced, Adam found himself facing challenging life situations. “At one point, I moved across the country, had an unhealthy work environment, was sleep deprived and newly married,” he explained. “All of that began to spiral downward and it took a while to gain insight about what I was doing and how unhealthy I actually was.” After discussions with his loved ones, especially his wife, he knew it was time for a change.

When Adam began taking steps to combat depression, he found the first step to helping him fully heal started with a voice. In a pediatric grand rounds discussion last year, Adam decided to share his story of recovery for the first time to an audience of over 200 people. “If we’re really going to change the field of medicine, outrage must be greater than apathy,” he said. “All too often, many people suffer in silence.”

Having the discussion on a larger scale revealed Adam’s own recovery toolkit to others, which created opportunities to learn more from others as well. For Adam, meditation, a list of things he is grateful for that he keeps by his bedside and a crisis intervention plan have helped him cope with both recovering from his alcohol addiction and depression.

As Adam began the healing process for himself, he began to heal others. His public exposure triggered numerous requests from people around the world who struggled with similar experiences. He realized the power human compassion could have and how it could connect people everywhere.

Adam has begun to use his exposure about his mental illness as fuel to encourage others to live more openly. “Vulnerability is contagious,” he said. “It’s liberating for me to live authentically and a large part of that is self-awareness. I am incredibly compassionate, a tad rebellious to cultural norms and I like to shake things up. But I have always done it with a greater purpose of trying to help others.”

Learn more about Adam Hill’s grand rounds discussion and read one of his latest publications in the New England Journal of Medicine here.

Click here to view information about the signs and symptoms of depression and what you can do to help people with mental health conditions.

Jennifer Hashem is a Communications Coordinator for the IU School of Medicine's Student and Faculty Affairs.