Are Physicians today Doctors of Debt? 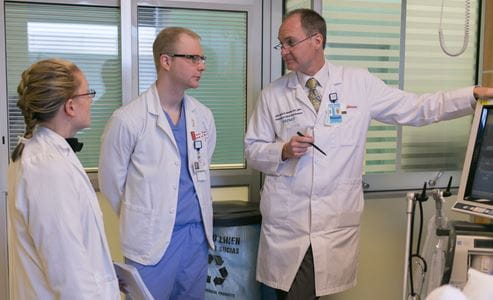 Adapted from an entry in Kevin MD

In August, our incoming medical students will receive a clean, crisp, new white coat.  On the front, the school’s signature emblem is neatly etched above the front pocket. At the White Coat Ceremony, established physicians place the white coat onto the new generation of doctors. The moment is treasured, picturesque, and a proud moment for all involved.  The ceremony ends with taking the Hippocratic Oath including the well-known verse “do no harm.”  So, at this point, many in the audience and those being clothed with the white coat are oblivious to the monetary investment they have committed.  Four out of 5 will graduate with an average debt of over $200,000 or so.  One in five will have benefited from the planning of their parents or themselves in paying for their four years of their medical education.  Some will argue that by graduating with large amounts of debt, they are inflicting harm on themselves.  I am not so sure about that, let’s look at that thinking, though.

Medical school education debt is at the forefront of many discussions among medical education circles and now part of the medical school accreditation process.  We recently went through our accreditation where student indebtedness was of particular interest. Medical students are reminded of their educational indebtedness constantly throughout their training.  It becomes more prominent as they graduate and have to contemplate repayment while making a limited residency salary.  Everyone from the overburdened and overworked physician resident to the meek medical student knows that they have accumulated more educational debt than they know how to pay off.

Looking at the AAMC average U.S. medical student indebtedness for those who graduated in 2016 doesn’t make it any less so, with graduates leaving with over $190,000 in debt from medical school, and this does not account for the accrued interest, of another $20,000!  Additionally, you have $12,000-$14,000 annually in interest accrual while in residency training.  It is no wonder that a majority of medical students are very interested in the Public Service Loan Forgiveness Program (PSLF), which allows them to work full time (at least 30 hours a week) in not-for-profit health care jobs to have their remaining loan balance forgiven after 10 years of making income-based monthly payments. For physicians-in-training, this is especially attractive and pertinent as 80 percent of U.S. hospitals qualify for to be not-for-profits and employees of those hospitals qualify for PSLF.

October 2017 marks the first time that loan forgiveness will be offered to those who started making payments in 2007; although, no medical students, residents or professionals were among those who may have had the opportunity. It was not until July 2009, when the law went into effect that medical student graduates even knew of the opportunity.  Since then, there have been many proposals that would limit the amount of forgiveness.  In fact, before President Obama left office, he proposed a cap on PSLF at $57,500 for all students. This would reportedly save 12 billion dollars over the next 10 years. But, this proposed cap threatens to disincentivizes medical education and doesn’t take into account the delayed financial gratification of physicians.  Fortunately, the proposal was not acted upon by Congress.  Now, with the Trump administration, there is a proposal to eliminate the program altogether.  Fortunately, the Department of Education came out and clarified that the elimination of the program would only affect those who borrowed for the first time after July 1, 2018.

Consider this: Residency can last anywhere from 3 to 7 years. The average resident salary is $50,000 for 80 hours of work or less. That’s double the number of hours in a normal workweek for most! Residents are not only overworked and underpaid and, according to some, undervalued. Their salaries have increased, but the per hour earnings has remained stagnant since the 1990s.

While resident salaries remain stagnant, medical school tuition has skyrocketed over the past 20 years. The average tuition and fees for public medical schools has increased by 312% to over $34,000 per year. So as medical schools hike up their tuition rates, hospitals reap the benefit of cheap resident labor. It’s an inequitable system that preys on the outdated Graduate Medical Education (GME) system, placing exorbitant debt on the shoulders of students and residents.

In response to this, people say, “Well, residency and fellowship are short-term. You’ll be attending physicians soon enough! Making the real money!”

Consider this: Medical debt disproportionately impacts students who are low income and from minority backgrounds. Minority students including African Americans, Hispanics/Latinos, and Native Americans make up only 12 percent of medical students in the United States. These same minority students are more likely to enter into primary care specialties and serve underprivileged communities than their White counterparts. Although residency and fellowship training is short term, the high price of medical debt actually deters the most underrepresented people from entering medicine in the first place.

So, what’s the solution?

Instead of capping the PSLF, legislators should reform graduate medical education (GME) as a way to address rising tuition and stagnant resident salaries. Some ideas for refinancing include decreasing medical school training to 3 years instead of 4, or increasing resident salaries in proportion to the hours worked. Additionally, changing the scope of public service as defined by PSLF could help make more physicians eligible for the program as well.  Unfortunately, this is very unlikely given the many priorities in Congress.

Ultimately, a proposed cap on the PSLF threatens to disincentivize medical student education, which is inherently different than other graduate programs because of the additional residency training. Capping loan forgiveness ignores the current realities experienced by both medical students and resident physicians. Instead of capping PSLF, policy makers should consider stopping rising medical student tuition costs and reforming GME stagnant salaries.  With the attitudes in Congress that graduate and professional students make millions upon graduation, don’t look for empathy or sympathy.

So, the next time you see your doctor in their clean, crisp white coat, ask yourself: “What’s the price of their medical education? Are they a doctor of debt?”

Summer 2018 financial information for Class of 2018 and 2019
MS4: Should you rent or buy?
MS3: Financial planning for your fourth year
MS4: How to complete the W-4 for residency programs
What should future Doctors Do? Pay down student loans or invest?