It’s a Match: High school sweethearts to celebrate fourth graduation together at IU School of Medicine 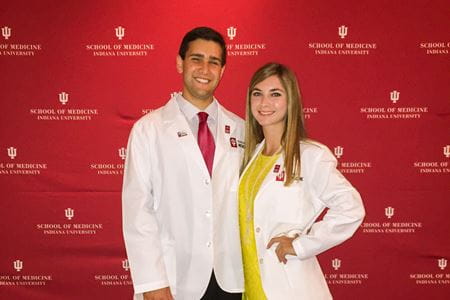 Now married, Carlos and Sarina are preparing to celebrate their fourth dual graduation ceremony, this time from Indiana University School of Medicine. Then they will begin their careers as physicians together with residencies at San Antonio Military Medical Center in Texas.

From kindergarten to med school

Every milestone in their journey has been taken together. And it all started back in kindergarten. Because their surnames are close alphabetically, they were often seated next to each other and appeared in every class photo side-by-side. They briefly lost touch when Sarina transferred to another school, but she returned to Academia del Perpetuo Socorro in high school. Carlos re-initiated contact by sending her their kindergarten class photo. 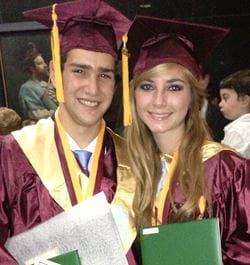 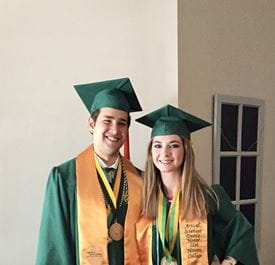 Ever since their junior year of high school, Carlos and Sarina have been inseparable, dreaming about their common goal of becoming doctors and charting their course together. They both were accepted to the University of South Florida (USF), where Sarina earned a degree in biomedical sciences, and Carlos pursued chemical engineering.

They researched medical schools together and applied to the same ones. They were thrilled when their first interview invitations both came from IU School of Medicine. The interviews were scheduled just half-an-hour apart, so they traveled to Indianapolis together.

“It felt so welcoming, and the people were so nice,” Sarina said. They were elated when later they received an acceptance letter—together. By the time they started medical school, they had already been dating nearly six years.

Together, Carlos and Sarina came to the decision to commission as officers in the U.S. Air Force through the Health Professions Scholarship Program (HPSP), which fully covers the cost of medical school. But it wasn’t just about the benefits. Sarina has several relatives who have served in the military, including her father, who was deployed to Afghanistan soon after Carlos and Sarina began dating. 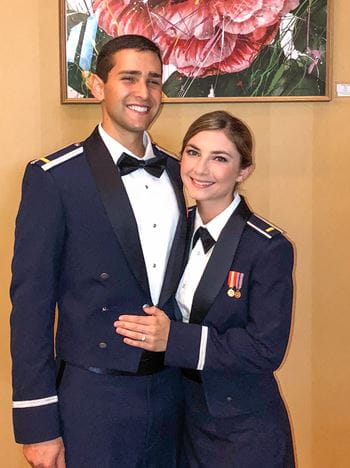 “Her family, I consider my family,” Carlos said. “When her dad was in deployment, that impacted me. I wanted to serve our country as well.”

Sarina’s family also includes several physicians, most of whom went through the HPSP military scholarship program. They were able to mentor Sarina and Carlos as they planned their educational and vocational paths.

“It’s the only field I’ve always thought I wanted to do,” Sarina said. “As a young girl, I looked up to my uncles and aunt who are physicians, and I was inspired by how they are able to help people and combine that with their own interests to be involved in research and clinical medicine.”

Now Sarina and Carlos are preparing for their next big step: residency training at San Antonio Military Medical Center. It was their top choice in the Military Match.

“San Antonio is the largest and only level-one trauma center in the Department of Defense, so it has a large patient volume, and it is academic focused with many residency programs, fellowship opportunities and research,” Carlos explained. “We love the city of San Antonio. We rotated there during fourth year as one of our military away rotations.”

Residency matching as a military couple

Carlos and Sarina are among just six IU School of Medicine students who participated in the Military Match for graduating medical students in the HPSP program. They learned their matches with the military on January 6, 2021—earlier than most of their classmates who will discover where they “match” through the National Resident Matching Program (NRMP) on March 19. Carlos will complete his residency in internal medicine, while Sarina will train in diagnostic radiology.

Throughout medical school, Carlos and Sarina synchronized their schedules, so they were always studying the same subjects and experiencing clinical rotations at the same time. That meant their lead advisors, Courtney Lewellen and Lauren Henninger, had to work together to coordinate. 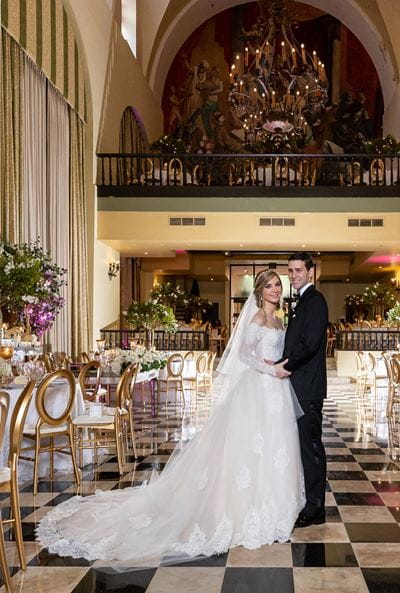 “We would have joint advising meetings with all four of us from time-to-time to talk out specific challenges,” Lewellen said. “For advisors, there is nothing more rewarding than watching students grow and find success towards their goals. This has been doubly rewarding in working with Carlos and Sarina as they are so special—as students, as physicians, and as a couple.”

Across the United States each year, more than 35,000 graduating medical students participate in The Match, a process that places new doctors with available residency positions at medical facilities throughout the country. Going through match as a couple is rare. IU School of Medicine typically works with six-to-eight couples each year, said Debra Rusk, MD, assistant dean for career mentoring in educational affairs.

Carlos and Sarina have now been a couple for 10 years. In the winter break following their first semester in medical school, Carlos surprised Sarina by proposing while on a family trip in Spain. They were married in San Juan on December 22, 2018, during winter break of their second year.

“We actually had IU friends come to Puerto Rico with us and be in our wedding. We got to show them a little bit of our island. It was such a wonderful time,” Sarina said.

Engaging in community, exploring options at IU School of Medicine

Because of their Hispanic heritage, Carlos and Sarina decided early in their medical training to join the Spanish section of Foundations of Clinical Practice, run by Javier Sevilla-Martir, MD, and Ruben Hernandez, MD. They also completed their family medicine clerkship with Hernandez and Sevilla, which gave them the opportunity to interact with Hispanic patients at IU Health Methodist Hospital clinics. 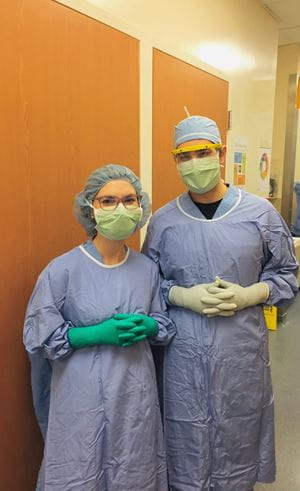 “They have both excelled in their skills and medical competencies not only in the clinical setting, but also in their extra-curricular activities in outreach service for underrepresented communities and academic work in research and teaching,” Hernandez said. “They have proven to be role models for every student.”

Despite their close connection to each other, Carlos and Sarina have been intentional about forming relationships with mentors and peers at IU School of Medicine. The community-minded couple has been highly involved during medical school, including work on many research projects and leadership of student interest groups for military medicine students and other groups exploring medical specialties.

“I think mentorship and career exploration are strengths at IU School of Medicine,” Sarina said.

One of the most unique opportunities Carlos and Sarina have had through their military training was learning to fly a plane as part of a required aerospace medicine course at Wright-Patterson Air Force Base in Greene County, Ohio, during the summer of 2019. Another memorable moment for the couple came a few months later, back at IU School of Medicine, when they assisted in the operating room together as part of their neurosurgery rotation at IU Health Methodist Hospital.

Whether it was applying to college, scholarships, medical school or residency programs, Carlos and Sarina have done it all together. At each step, there was uncertainty about whether they would receive the same offers and opportunities. “We try not to think too much of backup plans and stick to the positive—and work hard to be able to achieve that goal,” Carlos said. “And we pray a lot together.”

A future together as physicians

The couple’s mentors and advisors say they have indeed worked hard individually while encouraging each other every step of the way.

“Their charisma and integrity are above and beyond any expectations,” said Hernandez, who considers it a privilege to have been involved in their training. “I know they will put their heart and commitment into every component of their lives. I won't lie to say that my desire is for them to return to Indiana University and become faculty of our institution; at the same time, I know they will make the best decision after residency to serve the most in need.”