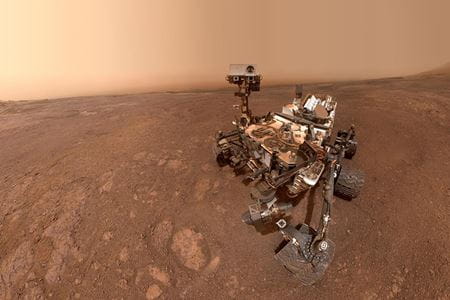 The Curiosity rover remains in action after 2291 sols! (AKA: a Martian day.1.027 sol/day). Here is takes a selfie near Rock Hall, because the Martians were too busy to lend a tentacle.

The Curiosity rover remains in action after 2291 sols! (AKA: a Martian day.1.027 sol/day). Here it is forced to forced to take a selfie near Rock Hall, because the Martians were too busy to lend a helping tentacle.

I walked into the ED expecting a chilly encounter. My new patient was a young woman with a lengthy history of tobacco and illicit drug use. She had come to the ED tachy and short of breath. Her UDS was incriminating, and the frequent references to “AMA” and “eloping” in her EMR courted no favours. I divined our interview: a histrionic performance of coughing and pain. Desperate pleas for relief that abruptly transition to accusations of malpractice following our refusal to prescribe opioids. I felt despondent before even seeing the patient.

She was occupied as I neared her room. As I waited, I took my own pulse. My own emotions distraught me. Dread, anger, frustration. I realized that I felt helpless: what could I possibly offer to this — presumably — drug-seeking patient. I reflected on the type of provider I wanted to be: compassionate and thorough. I effortfully tried to change my perspective. I reasoned that I would provide the best possible care and learn the most and if I gave the patient the benefit of the doubt. I resolved to ignore the patient’s documented behavior and approach her case as a diagnostic puzzle.

On entering, I consciously tried to make the patient feel welcome. I sat, I adjusted the lights, I asked about her comfort. As she described her symptoms – dyspnea on exertion, increasing reliance of inhalers, productive cough, vague chest pain – I sought to squelch the positive UDS results and consider alternative causes. In spurts, a history emerged: homeless, no access to medications, recent complicated pregnancy, likely long-standing hypertension. Suddenly, the differential broadened, as did the potential causes.

This encounter captures the common human fallacies that Daniel Kahneman so beautifully described in his book “Thinking, Fast and Slow”.

Representative bias: My patient’s intake and history fit the mold of drug-seeking behavior. My bias was to lump her in this category. Only by actively fighting this instinct could I even consider alternative explanations.

Availability: The ED sees a lot of young females with drug-seeking behavior. It sees relatively few young females with new onset heart failure. So upon entering a ED room with a young female, you are primed to think of the former diagnosis. Again, only through conscious thought can you overcome this bias.

Anchoring: A ship’s anchor prevents its motion during high winds and tides. A thought anchor lead to a belief that does not change with new evidence. My mind was anchored to a diagnosis before I even entered the patient’s room. I overcame this bias only by acknowledging it and actively fighting against it.

My subsequent exam revealed significant JVD (albeit no edema or lung crackles!) and an echo confirmed severe left ventricular heart failure. For the rest of the afternoon, I probed PubMed and UpToDate and considering various etiologies. As it turn out, her particular drug likely played a minor role. Rather, we came up with a testing algorithm to work through the differential. As such, I was rewarded with an excellent educational opportunity to learn the management and diagnosis of non-ischemic cardiomyopathy.

It shames me to think how my encounter would have gone had I not paused to take my pulse prior to entering the room. I thereby learned (re-learned, re-re-learned) the value of being aware of my own emotions as I see patients. By actively fighting against my biases – and discussing them opening – I can overcome them and become a better healthcare provider.

There’s an added dimension to this story. Indy is currently experiencing the coldest days of the winter. Running between buildings, my lungs are pierced with each frigid breath. I cannot fathom spending the night outdoors. It so happens that the earliest cardiac MRI we could obtain for our patient is the day the cold spell should break. What do you think: if the young woman was your patient, would you discharge her to the outdoors, or keep her in the hospital until she gets her scan?