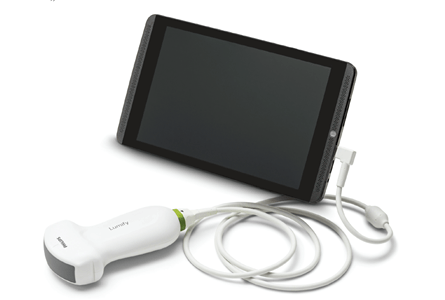 ONCE UPON A TIME, ULTRASOUND MACHINES WERE AS BIG AS WASHERS. TODAY, THESE SLEEK DEVICES FIT IN YOUR POCKET — AND WILL BECOME STANDARD ISSUE FOR STUDENTS.

THE TYPICAL progression for gadgetry—from personal computers to music players to mobile phones—is to start out large, clunky and expensive, and evolve into something small, sleek and relatively affordable.

Such is now the case with ultrasound devices—which in a few years are likely to become standard issue for students at Indiana University School of Medicine.

Once the size of washing machines, the latest versions of ultrasound technology, with brand names such as Lumify and Butterfly, have evolved so that they are no bigger than an electric razor—small enough to fit into the pocket of a white coat or a black bag. The price, $50,000 each a few years ago, has dropped to just a few thousand dollars.

Medical students in Bloomington and those in emergency medicine clerkships in Indianapolis have been getting instruction in how to use “point-of-care ultrasound,” or POCUS. But that’s been primarily on devices attached to laptop computers.

Newer, smaller devices—introduced to IU students in the fall—allow images to be displayed on a smartphone or tablet. Soon they will become the norm.

Like their predecessors, the technology gives us a look at soft tissues inside the body and offers answers to essential questions: Does the patient have a gallstone? Fluid in the lungs? An enlarged aorta?

Paul Wallach, MD, IU’s executive associate dean for educational affairs and institutional improvement, championed the use of the devices during his time at the Medical College of Georgia. Now, he’s doing the same at IU.

“Within five years,” Wallach said, “every student will be armed with one. Like a stethoscope, they’ll learn to use it across all years of the curriculum.”

An Earnest Tale of Friendship
The doctors will see you
The Faces of Regeneration
Will I be next?
Muncie’s Medicine Mansion